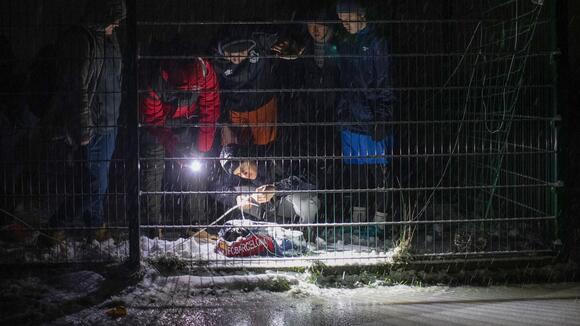 Ukrainian video-game vendor Roman Kryvyi, fresh from a soccer game on a snow-blanketed field in suburban Kyiv, sat up close to a TV in a kebab shop as intermittent city power returned just in time for Tuesday’s World Cup game between Wales and England.

For the 22-year-old soccer buff, there was no question about which side to support in the matchup: He remembers how he was crestfallen — rolling on the floor in despair and on the verge of tears — when Wales ousted his beloved Ukraine in the qualifiers. The grudge hasn't worn off.

“Only England! England has supported us in a military way,” Kryvyi said, overlooking the fact that England and Wales are both part of the United Kingdom — whose government has generously backed Ukraine with firepower and other support as it tries to repel Russia's invasion. He wants England to go all the way.

With their team not having made the finals this year, many Ukrainian soccer fans are throwing their support behind European countries that have backed Ukraine's fight against Moscow's forces, or teams with greats like Portugal's Cristiano Ronaldo or Lionel Messi of Argentina. Others just want to see top-notch play, out of appreciation for the game.

For Ukrainians these days, soccer trails well behind mere survival in the order of priorities. But the sport — as in many places around the world — can offer an escape from the troubles of daily life. For players, running around a field can offer up camaraderie and churn up body heat, and in this war-battered, says simply: Life must go on. Watching the World Cup in Qatar gives a sense of connection to the rest of the world.

Like many fans in Ukraine, Kryvyi and teammate Hlib Kuian, 21, were far from certain that they would be able to see the England-Wales match. Russian military strikes in recent weeks have devastated power plants, rendered internet services uncertain and affected basics like water and heating — on top of the deaths and injuries they have caused.

Only minutes before Tuesday evening's match, which England ended up winning 3-0, Mazza Cafe kebab-stand operator Mashrabjan Haydarov spotted that the lights had come back on in an apartment building across the street, so he turned off the generator outside that had been powering his bulbs and TV, and switched back to the local grid.

Then, even though the electricity was back, the internet popped off momentarily. The friends, accustomed to daily setbacks large and small, shrugged off the delay until the service rebooted. They also had to return home right when the match was set to end because of an 11 p.m. wartime curfew.

“In my house. I have no internet, so it’s a big problem for me,” said Kuian, an economics student. The only alternative to going out to see the match, he said, was watching it on his mobile phone's small screen.

For all their interest in watching the World Cup, Kuian and Kryvyi prefer being on the field themselves.

As night fell, their team joined up with two others on a fenced-in field in a public park in Irpin, a town that Russian forces occupied earlier this year — and their pullout exposed suspected atrocities committed against civilians.

In yet another sign of the Ukrainian resourcefulness that has become legendary in their war-battered country, the teams purchased and strung up lights to illuminate the field, and powered them up with an old — and recharged — car battery on the sideline. One player got up on a motorized scooter to shovel off the field, as snowflakes continued to fall.

Time was that they would have preferred to play in Irpin's larger stadium, but it was pockmarked by craters and a nearby cultural center gutted as Ukrainian and Russian forces battled for control of the town.

As for the obstacles to soccer-playing, electricity shortages and other woes, Kuian is taking them in stride.

“I have to live with it. I know who made this (happen)," he said. "I know that the Russian Federation wants that I live like this.”

Vasilisa Stepanenko in Irpin, Ukraine, contributed to this report.

Ukrainian president Volodymyr Zelenskyy said Russian President Vladimir Putin is losing a lot more soldiers in the war as Russia's unprecedented attacks continued in Kyiv. What Happened: Zelenskyy, in an interview with Sky News, said, "The east is losing a lot of people. They don't care about that." "We count...
1 DAY AGO
TheDailyBeast

Belarus’ army has begun removing armored vehicles from long-term storage to contribute to the joint regional grouping of Russian and Belarusian fighting forces, according to the Belarusian Ministry of Defense.The decision was made in order to facilitate “interoperability measures” for the battlegroups, which have been conducting joint drills since October in Belarus, according to TASS.It’s just the latest sign that Belarus could be gearing up for military action—or that it might be preparing to serve as a launchpad for Russian assaults on Ukraine.Last fall, Russia sent tens of thousands of troops and armored vehicles into Belarus to conduct live fire...
2 DAYS AGO
TheDailyBeast

Ukrainian authorities say Russia’s biggest cities are bound to suffer attacks as a result of the Kremlin’s war against Ukraine. “Internal escalation of the war in Russia is inevitable,” said Mykhailo Podolyak, an adviser to the Ukrainian president. “Cities that are pampered, lazy, that thought they lived in a different reality, such as Moscow, St. Petersburg, and Yekaterinburg, will be subject to strikes,” he said, stressing that Ukraine itself has no plans to carry out such attacks. But the “logic of war” means that all of Russia will be dragged into what the Kremlin started, he said. “Various blows will be dealt to various targets. Why, by whom, and what for? That’s another question,” he said. His comments came as authorities in Moscow were spotted installing air defense systems on the rooftops of some buildings, a move interpreted by some as paranoia over possible drone strikes, and by others as nothing more than a domestic propaganda ploy.Read it at The Moscow Times
2 DAYS AGO
Newsweek

The U.S. announced Wednesday that it would be sending 31 Abrams tanks to Ukraine one day after Germany said it would send its Leopard 2 tanks.
1 DAY AGO
The US Sun

A RUSSIAN warship armed with “unstoppable” hypersonic missiles is sailing towards the US coast in a show of strength, reports claim. The guided missile frigate Admiral Gorshkov has been closely monitored by Nato navies on its maiden voyage armed with 6,670mph Zircon weapons. An unconfirmed Russian Telegram channel...
2 DAYS AGO