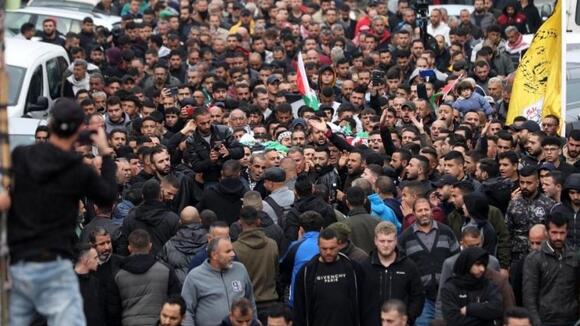 Ramallah, Nov 30 (SocialNews.XYZ) Five Palestinians were killed in clashes with Israeli soldiers in four separate incidents in the West Bank, prompting condemnation and calls for stopping the rising violence.

Earlier on Tuesday, the Palestinian Health Ministry said in a statement that two Jawad Al-Rimawi, 21, and Zafer Al-Rimawi, 22, were killed after they were shot by Israeli soldiers near the village of Kafr Ein in Ramallah, reports Xinhua news agency.

The Ministry said that a third victim, identified as Mufid Ikhalyel, was......

This help line is a growing effort to give Ukraine vital advice on repairs and maintenance as it pushes weapons to their limits.
WASHINGTON STATE・1 DAY AGO
Benzinga

A top Russian diplomat warned the U.S. in July 2022 against proceeding with efforts to bring the country before an international war court. 'Wrath Of God:' Dmitry Medvedev, the deputy secretary of Russia's Security Council, said the U.S. may have to face the "wrath of God" if it helps set up an international tribunal to investigate Russia's action in Ukraine, the Associated Press reported.
2 DAYS AGO
Reuters

LONDON, Jan 30 (Reuters) - Russia told the United States on Monday that the last remaining pillar of bilateral nuclear arms control could expire in 2026 without a replacement due to what it said were U.S. efforts to inflict "strategic defeat" on Moscow in Ukraine.
WASHINGTON STATE・1 DAY AGO