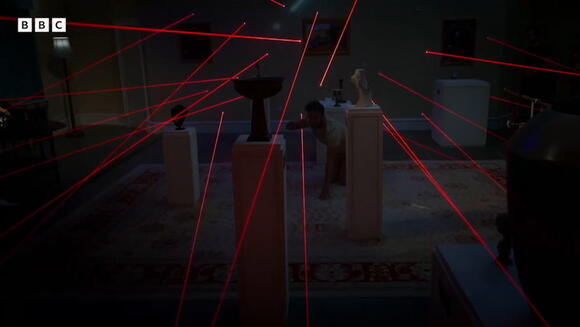 The Traitors , a new competition show on BBC One, has launched in “savage” fashion as it axed two contestants before the games had even kicked off.

Its debut episode on Tuesday (29 November) opened with host Claudia Winkleman greeting the 22 strangers as they arrived at a Scottish Highlands castle to play “the ultimate game of detection, backstabbing and trust” with the aim of winning up to £120,000.

Before the contestants could get stuck in, Winkleman instructed them to line up in order from who they thought was least to most likely to win the competition.

Amos, a 30-year-old doctor from north London, and Kieran, a 42-year-old solutions consultant from Hertfordshire, decided to place themselves as the least likely to triumph.

That was a mistake, as Winkleman swiftly informed them: “Every decision you make has a consequence. Every single one. So, you two, you think you’re going to lose.

“I’m going to take you at your word. So, I’m afraid it’s goodbye. I’d like you to leave the grounds immediately.”

Kieran reacted by saying the instant elimination was “complete and utter devastation”, while Amos confessed he also found it “difficult”.

Another contestant who remained in the competition, cheerleading coach Theo, said: “Claudia is a savage. I know she’s an icon and all, but she is not playing.” 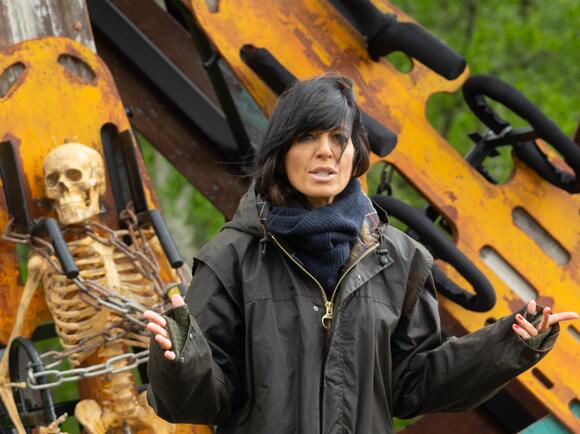 The rest of the players will be “the faithful” – those who are kept in the dark about the identity of their enemies.

The trio of traitors debated which player they would “murder” first. Their decision will be revealed during Wednesday’s episode (30 November).

After the “murdered” player is booted out, all the contestants will meet and decide to which person they want to “banish” on suspicion of being a traitor.

When the competition ends, the few remaining players will share the prize pot (which is being built up through a series of challenges throughout the series) if they are all faithful.

But if there is still an undetected traitor among them, the traitor walks away with all the cash.

The Traitors continues on BBC One on Wednesday 30 November at 9.15pm.

What do we mean when we talk about Young Adult fiction? Utter the term YA, and you will most likely picture something resembling Lockwood & Co. Netflix’s newest No 1 series has all the hallmarks of a YA smash. A mixed-gender group of teenage protagonists. A healthy dollop of the supernatural. A shelf-load of lore. Adapted from novels by Jonathan Stroud and created by Attack the Block’s Joe Cornish, the series follows a trio of juvenile ghost-hunters, played by Ruby Stokes, Cameron Chapman and Ali Hadji-Heshmati. It’s a CGI-laden fantasy melodrama, big on quips, and even bigger on action. And...
1 HOUR AGO
The Independent

Yes, it’s finally happened. Fawlty Towers is getting a reboot.For decades, the very idea seemed unthinkable. Running for 12 episodes (two series of six episodes apiece) in 1975 and 1979, John Cleese and Connie Booth’s Torquay-set comedy was a paragon of restraint. From the writing through to the performances, it was bottled lightning. Each episode was a classic. And then, after 1979, it was gone. No more. Decades later, the series would still be widely celebrated for this “quit while you’re ahead” philosophy. Ricky Gervais, for instance, has often compared the decision to endThe Office after two series to the precedent set by Cleese....
1 HOUR AGO
The Independent

Wrexham defender Ben Tozer has said Sheffield United striker Billy Sharp has “fabricated stuff in his head” after the FA Cup replay between the two sides ended on a sour note.Sharp and Blades team-mate Sander Berge scored stoppage-time goals to earn a 3-1 win and deny the Hollywood-owned Vanarama National League side a blockbuster fifth-round clash with Tottenham.Sharp was highly critical of Wrexham in a punchy post-match television interview, claiming they had been disrespectful in the build-up to the match and he did not save all of his words for the TV cameras.https://t.co/vhmG9muWZo pic.twitter.com/naB9NCLvku— Sheffield United (@SheffieldUnited) February 7, 2023Tozer...
1 HOUR AGO
The Independent

Gemma Arterton has revealed that she gave birth to her first child, a boy, shortly before Christmas.The 37-year-old British actress, best known for films including St Trinian’s and Quantum Of Solace, announced the news on the Zoe Ball Breakfast Show on BBC Radio 2 on Wednesday.After host Ball prompted her by saying “Congratulations are in order”, Arterton admitted she and her husband, Irish actor Rory Keenan, are “very, very happy”.She added: “He was born just before Christmas. A little Christmas elf.”Praised by Ball for looking “utterly fabulous”, Arterton jokingly replied: “The power of the paintbrush, as I would say.”The actress...
3 HOURS AGO
The Independent

Netflix viewers have called on others to help the streamer’s “underrated” Lockwood & Co land a second season. Despite minimal press and promotional content, the eight-episode detective fiction has managed to secure the No 2 spot on Netflix UK’s Top 10 watchlist, having arrived on the platform on 27 January.Based on British author Jonathan Stout’s supernatural book series of the same name, the show follows Lucy (Ruby Stokes), a girl with psychic abilities. Lucy joins the ghost-hunting agency Lockwood & Co, which is run by teenagers Anthony (Cameron Chapman) and George (Ali Hadji-Heshmati).Together, without adult supervision, the trio battle...
1 DAY AGO
The Independent

The Gold: The astonishing true story behind the Brink’s-Mat robbery

It all began with six men in a van. On the 26 November 1983, half a dozen armed men broke into the Brink’s-Mat depot near London’s Heathrow Airport, where they were expecting to find a million pounds worth of foreign currency.Instead, they stumbled upon gold bullion worth £26m.At the time, it was the largest robbery in world history and changed British policing forever.The case is being dramatised in a new BBC One drama, starring Hugh Bonneville, Jack Lowden, Dominic Cooper, Charlotte Spencer, and Tom Cullen.Here’s what we know about it…What happened on 26 November?At first, it just seemed like “a...
49 MINUTES AGO
The Independent

Former Scotland football striker David Goodwillie has left Northern Premier League club Radcliffe after they admitted to making “a significant misstep” in signing him.Goodwillie, who was ruled by a judge at a civil court case in 2017 to have raped a woman, turned out for Radcliffe against Belper Town on Tuesday night.The club had made no announcement of his signing, and did not list the ex-Blackburn forward as one of two changes to their starting line-up on Twitter.But Goodwillie’s name appearing on the team sheet was met with an angry response on social media.Goodwillie, 33, scored a hat-trick in a...
3 HOURS AGO
The Independent

Australia’s Channel Nine’s Today show accidentally shared red carpet footage of this year’s Grammy Awards of a behind-the-scenes moments.On Monday morning, a livestream from the Los Angeles-based awards show was shared on Today. The stream, shared by the Daily Mail, featured some stars walking on the red carpet at the Crypto.com arena while the Australian program’s co-hosts, Karl Stefanovic and Sarah Abo, discussed the show and its attendees.As the TV hosts talked over the stream, they noted that Beyoncé had yet to arrive before the footage panned over to an assistant on the red carpet.The woman was seen holding...
2 DAYS AGO