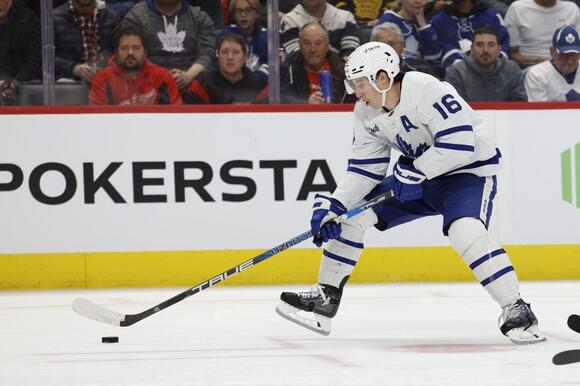 Mitchell Marner will try to match the Toronto Maple Leafs’ record of 18 straight games with at least one point Wednesday night against the visiting San Jose Sharks.

Marner scored in the Maple Leafs’ 4-2 victory over the Detroit Red Wings on Monday as the Leafs completed a 4-0-0 road trip.

The Sharks opened their own four-game trip Tuesday night with a 4-0 victory over the Montreal Canadiens.

“It’s a hard league, man,” Marner said. “I’m not expecting this every night. It’s more important (to get) wins; that’s what we have been doing, and that’s why this feels great.

“Nothing is ever achievable in this game by yourself. It’s always kudos to your teammates. I’m trying to find spots where I can get the puck in my hands to make plays and try to find people in open ice.”

Matt Murray made a season-high 42 saves Monday against the Red Wings.

“This was not our best game of the trip — credit to Detroit,” Maple Leafs coach Sheldon Keefe said. “They made life hard on us to get out of our zone, but our goaltending was outstanding again. We defended way too much, but especially in periods 2 and 3, we did not give up the big chance. The guys did a good job of allowing Matt to see the puck.”

“The team game is making everybody better,” Keefe said. “There are a lot of teams that deal with a lot of injuries and find a way to win. We’re a good enough team that we’re going to find our way on the right side of it.”

Sharks goaltender Kaapo Kahkonen stopped 28 shots in Montreal to earn his third career shutout. Kahkonen has a 3-5-2 record with an .884 save percentage.

“That’s great, but it also tells a lot about the way we played as a team tonight,” Kahkonen told NBC Sports California about his first Sharks shutout. “Huge blocks, huge kills, good sticks on the (penalty kill), taking away seams and boxing out guys so I could see pucks.”

The Sharks won for just the second time in their past seven games (2-4-1).

“We needed (the win),” Sharks coach David Quinn said. “Obviously, it was a funny game. We haven’t had that type of game in a long time, so special teams were huge, our penalty kill was huge.”

Aaron Dell, recalled from the Barracuda last weekend, was the backup goaltender on Tuesday.

Mats Zuccarello scored at 2:08 of overtime to lift the Minnesota Wild past the Philadelphia Flyers 3-2 on Thursday in
SAINT PAUL, MN・14 HOURS AGO
Sportsnaut

The lowly Columbus Blue Jackets, infused with a rare jolt of confidence, head to Vancouver to face the Canucks on
COLUMBUS, OH・18 HOURS AGO
Sportsnaut

Newcomer gives Sens a boost ahead of Toronto trip

The Vegas Golden Knights spent most of the first half of the season leading the Pacific Division. Now their slump
NEW YORK CITY, NY・19 HOURS AGO
Sportsnaut

Nikita Kucherov had a goal and two assists, including one on Victor Hedman’s game-winning tally, as the Tampa Bay Lightning
TAMPA, FL・12 HOURS AGO
Sportsnaut

Darcy Kuemper made 35 saves, and stopped two of three shots in the shootout, and Alex Ovechkin posted his 32nd
PITTSBURGH, PA・15 HOURS AGO
Sportsnaut

Nikita Kucherov had a goal and two assists, including one on Victor Hedman’s game-winning tally, as the Tampa Bay Lightning
BOSTON, MA・15 HOURS AGO
Sportsnaut

Tage Thompson had a goal and an assist to help the visiting Buffalo Sabres to their fifth straight win, 3-2
BUFFALO, NY・14 HOURS AGO
Sportsnaut

Matt Duchene and Filip Forsberg scored off turnovers in the third period for the host Nashville Predators, who overcame a
NASHVILLE, TN・14 HOURS AGO
Sportsnaut

The Colorado Avalanche, who are on the rise in the defense of their Stanley Cup title with six consecutive wins,
CALIFORNIA STATE・1 DAY AGO
Sportsnaut

Red Wings in search of momentum at Montreal

Overtimes and shootouts haven’t been kind to the Detroit Red Wings this season. That’s what made their overtime victory over
DETROIT, MI・2 DAYS AGO
Sportsnaut

The Florida Panthers, who are getting noteworthy performances from Brandon Montour, Carter Verhaeghe and Matthew Tkachuk, host the Los Angeles
LOS ANGELES, CA・22 HOURS AGO
Sportsnaut

The Toronto Raptors reportedly received a seriously strong trade offer for one of their top players, but it still seems
TORONTO, OH・1 DAY AGO
Sportsnaut

Latest test for surging Kings will come from Raptors