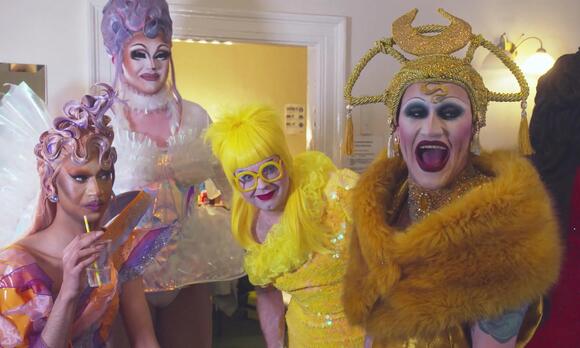 There are no limits in the Runiverse, as this latest spin-off proves. The 12-part show follows the queens from the second series of RuPaul’s Drag Race UK as they go on tour. It’s no bad thing that you know exactly what you are in for – funny, warm, behind-the-scenes chats with our liberating queens. In the first episode, Cherry Valentine (who died in September) reflects on the documentary she made about growing up in the Traveller community. Hollie Richardson

HM King Charles has always fancied himself as a bit of a Kevin McCloud . This show follows his ambitious plan to rescue Dumfries House, an 18th-century stately home in a part of Ayrshire left devastated by the death of the coal industry. The estate was bought in 2007 by a consortium led by the former Prince of Wales for £45m, to save it for the nation, and his ambition to regenerate the area has been a project more than 10 years in the planning. Hannah Verdier

Grand Designs: House of the Year

Delving into a realm suffused with mould-breaking architecture, tonight’s show celebrates houses that disregard the rulebook. Among the mock-Tudor terraces of south London suburbia, a white industrial-steel frame stands out defiantly. Among radical renovations, a 12m sq plot has been transformed into a four-storey family house. Danielle De Wolfe

In the weeks before a fire killed six members of his family, Andrew Doyle, an ice-cream van driver in Glasgow, was the target of threats and abuse. This second, concluding part of the documentary about the case picks up in 1984, when seven men were charged for the crime in one of the biggest trials in Scottish history. HR

More pointless challenges performed by reasonably funny people as we return to the forest in the company of David Mitchell and comic stooges including Maisie Adam and Phil Wang. Tonight’s tasks include an amusing attempt to improvise a woodland spa with self-devised therapies that turn faintly sinister. Phil Harrison

Armando Iannucci’s space comedy fronted by Hugh Laurie is back for a second series of comic intergalactic mishaps. Will Captain Ryan tell guests that they are stuck onboard for nearly a decade with limited food? One thing is certain: no one will out-act Rebecca Front, whose turn as a harrowed passenger responsible for throwing the ship off-course is spellbinding. Alexi Duggins

Cited as the one David Lynch film that even Lynch objectionists can get behind, The Elephant Man (1980) is a profoundly beautiful work. As John Merrick, whose physical disfigurement has caused him to be pushed to the fringes of society, John Hurt offered a career-best performance. For all its black-and-white formality and stiff period detail, this is a film of almost unbearable humanity. Although the “I am not an animal!” scene became notorious, the real gutpunch is the ending. Stuart Heritage

Live coverage of day one in Las Vegas, where teams from the US and Europe face each other in the nine-ball variation of the game.

Day one of the first Test in the three-match series, at Rawalpindi cricket stadium.

1 Which animals returned to Devon’s River Otter in 2013?. 2 The Chandrasekhar limit relates to the mass of what?. 3 Which Nina Simone song was a tribute to the writer Lorraine Hansberry?. 4 Which eighth-century dynasty ruled territory from the Pyrenees to Punjab?. 5 On Mumsnet, what does...
PENNSYLVANIA STATE・7 HOURS AGO
The Guardian

Meet the residents of a hard up community that shared a windfall. Plus: the story of hip-hop continues. Here’s what to watch this evening
8 HOURS AGO
The Guardian

After repeating ‘fake news’ about Hasna Aït Boulahcen’s role in the Paris attacks, Dina Amer switched from journalism to directing – to uncover deeper truths about this tragic misfit
2 DAYS AGO
brides.com

When Prince Harry and Meghan Markle announced that they were expecting their first child together (who would later be named Archie) on October 15, 2018, the public couldn’t contain their excitement. But before the Duke and Duchess of Sussex shared the news with the world, they revealed the information to the royal family. In his new memoir, Spare, Harry opens up about the first time the couple broached the subject with their relatives. Harry writes in his novel that he and Meghan had planned on starting a family after they tied the knot in May of 2018. They learned they were expecting a few months later, so they decided to tell members of the royal family at Princess Eugenie’s wedding on October 12, 2018.
21 HOURS AGO
The Guardian

I read Marie Kondo’s The Life-Changing Magic of Tidying and started purging decades of detritus. But I wasn’t prepared to see my daughter’s old trike in the charity shop window. I saw the wooden trike in a charity shop window, sometime around 2017: it was a bit...
3 DAYS AGO
The Guardian

In the clear sky over the winter-yellowed marsh grasses on the outskirts of the town of Huliaipole, the bang and crump of artillery picked up pace like the thunderclaps of a distant but approaching storm. The Russian armed forces declared on Sunday that they had launched a new offensive in...
1 DAY AGO
The Guardian

New campaign finance filings reported by Daily Beast do not shed light on real source of $600,000 in funding
WASHINGTON STATE・3 DAYS AGO
The Guardian

The UN working group of experts on people of African descent last paid a visit to the UK in 2012. The country has transformed dramatically since then, with many reeling from the impact of austerity measures, Brexit, and the coronavirus pandemic. For Catherine Namakula, a human rights professor at the...
21 HOURS AGO
The Guardian

A hospital in Harlow has withdrawn painkilling gas and air for women because of the air quality of its maternity unit after high levels of nitrous oxide were found. The Princess Alexandra hospital in Essex is the latest to withdraw the treatment. The Health and Safety Executive is already investigating Basildon hospital amid concerns over staff exposure to high levels of nitrous oxide used in Entonox.
3 DAYS AGO
The Guardian

The family of a severely mentally ill woman who lay dead and undiscovered in her flat for more than three years said they were unable to have any contact with her because of privacy laws. Laura Winham, 38, had schizophrenia, struggled to look after herself and had become estranged from...
15 HOURS AGO
The Guardian

If the German chancellor, Olaf Scholz, chose to upgrade Germany’s military assistance to Ukraine this week, it was only as a result of the extreme amount of pressure that had been building up in recent days. Russia’s full-scale invasion of Ukraine has thrust upon Germany the necessity of some...
GEORGIA STATE・1 DAY AGO