Effort and attitude help Royals to victory over Vikings 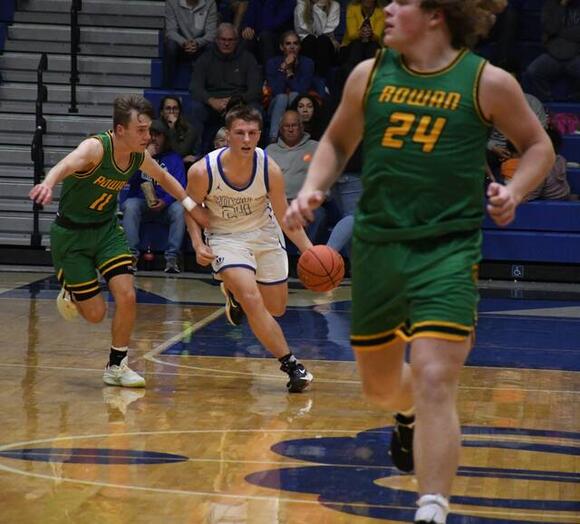 Mason County’s Braylon Hamilton dribbles down the floor against Rowan County on Tuesday night at The Fieldhouse. (Evan Dennison, The Ledger Independent)

Far from their finished product, Mason County coach Brian Kirk wanted to see two things from his team on opening night when the Royals hosted Rowan County on Tuesday at The Fieldhouse.

Check and check as the Royals came away victorious with a 67-48 victory to open up the season for both teams.

At times things looked fluid, racing out to a 20-8 end of first quarter lead and running away with the game in the fourth closing on a 19-8 run, but other times they showed they still needed to get in the flow of things, having a handful of football players join the team just days ago.

“That’s been our point of emphasis up to this point is just effort and attitude. Those are two things that we’re not going to coach, we shouldn’t have to coach and we won’t coach. We feel like we came out and got off to a great start, hit some open shots,” Kirk said. “Then we just became a little stagnant at times, but we expected things to be a little sloppy, a little sluggish from time to time.”

Rowan County coach Shawn Thacker felt the same way, having one of the youngest teams he’s ever had in Morehead, the youth showing early on as they committed 12 first half turnovers and shot 5-of-20 from the field with a 32-15 deficit.

“Shot ourselves in the foot, weren’t very confident with the ball. They can do things to you that a lot of people can’t do,” Thacker said.

The Royals utilized their pressure defense into 22 points off turnovers, which ended up being the difference in the contest, the Vikings turning just 14 Royals turnovers into four points.

Four players in double figures also helped for the Royals, sharing the basketball to the tune of 15 assists.

“We need to have that consistently in order to accomplish the goals that we want. We’ve got to have that balanced scoring. I thought we did a great job of sharing the basketball, 15 assists. Now we’ve got to cut down on some turnovers, especially against the two-three zone but like I said, it’s some of the chemistry right now just trying to figure each other out,” Kirk said.

Terrell Henry and KG Walton were the first off the Royals bench, Kirk confident in his depth using 10 players alone in the first quarter. Henry and Walton were playing in Bardstown Friday night for a chance to play at Kroger Field this weekend.

“A large group of our kids we’ve had in the gym for three hours. I’m sure that transition from football to basketball is difficult from a conditioning standpoint and just filling into the flow and the rhythm of the game,” Kirk said.

The two combined for 25 points, eight rebounds and seven assists, Landon Scilley also coming over from the gridiron and a leaping grab Friday night that would have made Sportscenter had it been in the NFL, Scilley contributing four points and three rebounds in 15 minutes of action.

Cody Wilburn helped keep Rowan in it after the Vikings slow start, scoring 13 of the Vikings 15 in the third, his jumper with six minutes remaining in the game getting them within 11 at 46-35.

“Our youth showed itself a little bit early. I thought second half we kind of settled in a little bit offensively and played a little bit better,” Thacker said.

Wilburn would finish with a game-high 20.

But the Royals depth started to wear on the Vikings from there, a 10-2 run to break the game back open over the next three minutes.

The Royals will now get three more days of practice before their next game, one that was circled going into the season as they’ll head to Jackson County to take on a top 10 team in the state in Lyon County and highly touted junior prospect Lyon County.

“Very important, very crucial to come in and be locked in over the next three days. Taking on a top 10 team in the state. That’s why you’re at this program, if you’re not excited to play in those big time games against big time players, Travis Perry, Coach Perry does a tremendous job. Travis Perry is very deserving of those accolades and he’s a great player. This is a great opportunity to see where we’re at,” Kirk said.

The Vikings path to continue to gain experience will once again be tested come Thursday as they host Boyd County, projected as one of the top teams in the 16th Region.

“Life doesn’t get any easier. But we got a dose of what one of the top tier teams in the state would look like and now you know what it is you got to do to get better to be able to compete with one of those. That should put us on our way. The thing we talked about in the locker room was having individual accountability and everybody in the locker room to look at themselves and say I could be better. And you know, that’s what we’ll go to work on tomorrow,” Thacker said.

A stitch in time

Maysville has been nominated for a Top 10 list by USA Today for the 10 Best Readers’ Choice Awards. USA Today is a multi-plat
MAYSVILLE, KY・3 DAYS AGO
Ledger-Independent

In the 1995 tourney, Barbara Finch and her mother, Margaret Gallenstein cheer on Saint Patrick in Richmond.
RICHMOND, KY・4 DAYS AGO
Ledger-Independent

Getting the hang of it

On with the show

Artist Kelcie Johnson, whose art is featured on the Maysville mural wall honoring African Americans in the community, is hown at the opening o
LEXINGTON, KY・13 DAYS AGO
Ledger-Independent

The buyer of Hayswood Hospital in Maysville hopes to turn the building into housing units in the coming years. In November 2022, Fr
MAYSVILLE, KY・10 DAYS AGO
Ledger-Independent

MLK Jr. Day to be observed throughout Maysville

KSB founder chosen for Governor’s Award in the Arts

On Wednesday, Gov. Andy Beshear announced the recipients of the 2022 Governor’s Awards in the Arts, including Kaye Savage Browning.
KENTUCKY STATE・23 DAYS AGO
Ledger-Independent

The historic home of John P. Parker in Ripley recently took another huge step in becoming a unit of the National Park Service. Part
RIPLEY, OH・13 DAYS AGO