FOX44news.com is your news now and is certified by WeatheRate as the Most Accurate Forecast in Central Texas.

No. 6 Baylor falls flat in first true road test of the season 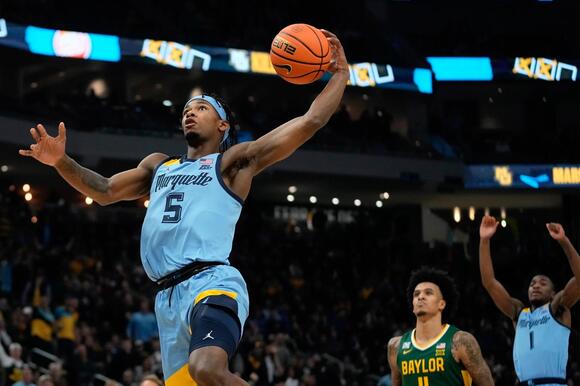 MILWAUKEE, WI ( FOX 44 ) — The sixth-ranked Baylor Basketball team struggled mightily in its first true road game of the season, as the Bears got blown out by Marquette 96-70.

The Bears started out well in the first few minutes, as they took an early 7-2 lead about four minutes into the game. The Golden Eagles responded with an immediate 23-2 run over the next 5:29 to take a lead for good.

Turnovers were really the downfall for Baylor in the game, especially in the first half, as Scott Drew’s team coughed the ball up 16 times before the break, while attempting just 19 shots.

In the end, three Bears ended the game in double figures, with LJ Cryer (19 points), Adam Flagler (16 points) and Keyonte George (12 points) all reaching the mark.

The defense for Baylor was also a major issue, as the Bears allowed Marquette to shoot nearly 60% from the field and 50% from the beyond the arc.

The schedule doesn’t get any easier, as Baylor will next be in action on Friday, December 2nd when the Bears travel to South Dakota to take on No. 14 Gonzaga at 7:00 pm.

For the latest news, weather, sports, and streaming video, head to KWKT - FOX 44.

FOX44news.com is your news now and is certified by WeatheRate as the Most Accurate Forecast in Central Texas.