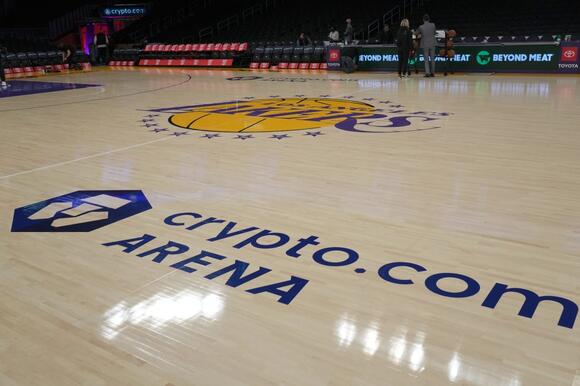 A feel-good story on an otherwise feel-bad night.

Perhaps it's fitting that the most entertaining moment of the evening, from a Lakers fan perspective at least, transpired during a break in play.

And this was the result.

"I went to a little camp at Apollo Park, not too far from my house," the 24-year-old Murray said, per CBSLA . "I would just play in the games, play pick up when I got older and now I play at the gym."

"We were scanning the tickets and a lady approaches us, and she's like 'You guys want to enter for a chance to win some money?'" Murray said. "I was like 'Is there a catch?'... I kind of wanted to load it up from about the right side, and let it off in the middle... You know, aim it correctly. That was my technique."

Murray, currently an Amazon delivery driver, nailed the mid-court miracle, and can be seen in the broadcast clip video being congratulated by Lakers Anthony Davis, Dennis Schroder, Thomas Bryant, Matt Ryan and Juan Toscano-Anderson. Reserve Lakers forwards Ryan and Juan actually are in position to grab the rebound, and are photographed getting amped for Murray as soon as his shot goes through the net.

"I had my little fangirl moment," Murray said of his interaction with the Lakers players. "I was just so excited to hug [Davis,] see everybody. "It was just a crazy experience."

"My mom, she comes first always, so you know, [I intend to give some of the winnings] to her," he said. "Christmas is coming up, so anybody in my family who wants some presents. And the rest, I have to save it. I had to play it smart with this."

This would be something else.
LOS ANGELES, CA・1 DAY AGO
The Comeback

Shocking and frankly terrifying news broke regarding Memphis Grizzlies superstar Ja Morant on Sunday afternoon. The story doesn’t quite paint the 2022 Most Improved Player or his associates in the most positive of lights either. The Athletic delivered a bombshell report that detailed the shocking incident. It occurred last month after a game between Morant’s Grizzlies Read more... The post NBA world reacts to absolutely shocking Ja Morant news appeared first on The Comeback: Today’s Top Sports Stories & Reactions.
MEMPHIS, TN・2 DAYS AGO
AllLakers

How much interest, per se?
LOS ANGELES, CA・8 HOURS AGO
BasketballNetwork.net

Stephen A. lets us in on a private conversation between him and Isiah Thomas about Steph Curry.
19 HOURS AGO
AllLakers

There have been a number of sad reports coming out of the world of professional wrestling in recent weeks, with former stars passing away, both during their career and following it.
2 DAYS AGO
prosportsextra.com

I’ll never enjoy covering these stories but whenever someone sadly passes away we need to make sure it’s covered. If you’re a fan of USC or the Los Angeles Rams this persons death might hurt you more than on average. Former Cleveland Browns first round pick, Charles,...
LOS ANGELES, CA・1 DAY AGO
Larry Brown Sports

Patrick Mahomes might need to ask for a little forgiveness from his wife. Mahomes spoke with the media on Monday during Super Bowl Opening Night ahead of Sunday’s big game between his Kansas City Chiefs and the Philadelphia Eagles. The Chiefs quarterback was asked about his Valentine’s Day plans considering the holiday is on February... The post Patrick Mahomes might be in trouble with his wife over 1 comment appeared first on Larry Brown Sports.
KANSAS CITY, MO・12 HOURS AGO
AllLakers

One of sports' biggest villains continues trying to tear down one of its biggest heroes.
LOS ANGELES, CA・2 HOURS AGO
AllLakers

Here are three options for the Lakers before the trade deadline.
LOS ANGELES, CA・14 HOURS AGO
AllLakers

While playing one season in Los Angeles, the forward averaged 7 points and 2.3 rebounds.
LOS ANGELES, CA・1 DAY AGO
AllLakers

It's an immediate upgrade, but does it return the Lakers to contention?
LOS ANGELES, CA・2 DAYS AGO
AllLakers

We were all waiting for it.
DALLAS, TX・2 DAYS AGO
AllLakers

With Irving off the table, LA must pursue other options for improvement.
LOS ANGELES, CA・1 DAY AGO
AllLakers

Is a Cavs reunion going to happen on the West Coast?
LOS ANGELES, CA・2 DAYS AGO
AllLakers

Lakers: Insider Expects LA To Make A Trade With Any Of These 5 Teams Before Deadline

Lakers: Watch LeBron James Head Onto the Court on a Potential Record-Breaking Night

The King is in the building.
LOS ANGELES, CA・5 HOURS AGO
AllLakers

Lakers News: Former LA Point Guard May Be Available Ahead of Trade Deadline

He would be an upgrade, but would the juice be worth the squeeze?
LOS ANGELES, CA・1 DAY AGO