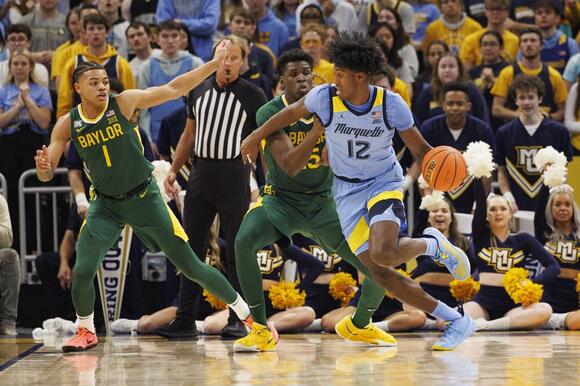 Olivier-Maxence Prosper poured in 24 points and Marquette’s defense did the rest as the Golden Eagles flew to a 96-70 win over No. 6 Baylor on Tuesday in a Big 12/Big East Battle game in Milwaukee.

Marquette’s pressing defense set the tone in a near-runaway first half, after which it led by 26 points. The Golden Eagles (6-2) pushed their advantage to as many as 29 points 6 1/2 minutes into the second half and never let Baylor, playing its first “true” road contest of the season, get back in the game.

Kam Jones added 20 points for Marquette, with David Joplin scoring 19, Oso Ighodaro hitting for 10 and Tyler Kolek distributing 11 assists in the win. Marquette made 21 of its 37 shots in the first half en route to the bulky halftime lead.

The victory marked the biggest win for the Golden Eagles against a top-10 team in 51 years.

Baylor led 7-2 after a Flagler step-back jumper with 16:07 to play in the first half. But the next five minutes belonged to the Golden Eagles as they roared off on a 23-2 run that featured 10 points by Prosper and was capped by a dunk by Chase Ross at the 10:38 mark. Fourteen of Marquette’s points over that stretch came after turnovers by the Bears.

The Golden Eagles kept up their defensive intensity throughout the half, taking a 51-25 lead into the break. Marquette shot 56.8 percent from the floor and the Golden Eagles made more baskets (21) than Baylor attempted (20) over the first 20 minutes of play.

Jones led Marquette with 13 points before halftime with Prosper adding 12.

Baylor was led by George’s eight points in the half. The Bears were 50 percent from the floor but made 10 less shots than Marquette because of 16 first-half turnovers.

No. 14 Marquette scoots past Butler

Tyler Kolek finished with 13 points and came through in the clutch late as No. 14 Marquette held off Butler
MILWAUKEE, WI・10 HOURS AGO
Sportsnaut

Giannis Antetokounmpo recorded a triple-double of 35 points, 15 rebounds and 11 assists as the host Milwaukee Bucks recorded their
MILWAUKEE, WI・3 HOURS AGO
Sportsnaut

Giannis Antetokounmpo recorded a triple-double of 35 points, 15 rebounds and 11 assists as the host Milwaukee Bucks recorded their
MILWAUKEE, WI・2 HOURS AGO