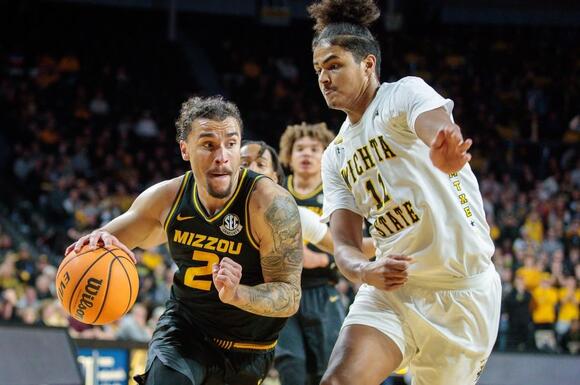 Missouri forced 20 turnovers and scored 29 points off of them. The Tigers rallied behind their defense while erasing a 10-point, second-half deficit.

Carter hit a 3-point jumper from the top of the key and drove to the basket for a three-point play as Missouri pulled ahead 72-71 with two minutes left.

With Wichita State up 75-74, Bell missed two free throws — then Hodge hit one free throw to tie the game with 9.7 seconds left to force overtime.

Carter and East put up six points each in overtime as the Tigers outscored the Shockers 13-9.

After the Shockers pulled even at 14-14 in the tightly played first half, the Tigers used a 9-2 run sparked by 3-pointers from Carter and Hodge to forge a seven-point advantage.

Wichita State responded with an 11-4 surge to tie the game 27-27 with Bell and Porter hitting consecutive treys.

Missouri led the rest of the half and pushed its lead to 43-36 with East and DeAndre Gholston converting turnovers into layups in the final minute.

That started a 10-2 run that allowed the Tigers to retake the lead at 55-54. The Shockers responded with 10 unanswered points to move ahead 64-55 with Pierre hitting back-to-back shots from beyond the arc.