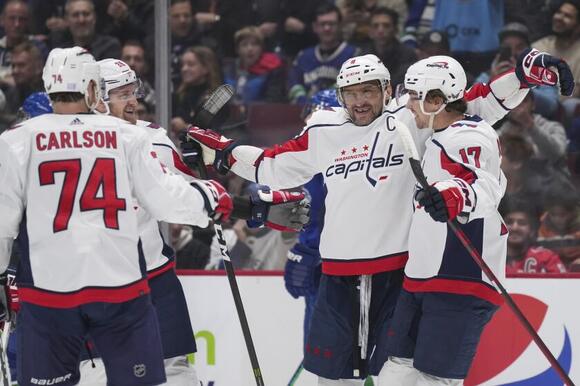 Alex Ovechkin scored twice, passing Wayne Gretzky for the most road goals in NHL history, and the Washington Capitals beat the Vancouver Canucks 5-1 on Tuesday night.

Ovechkin has scored 403 of his 793 career goals away from home. Gretzky holds the overall record with 894.

Anthony Mantha added a goal and an assist for the Capitals (10-11-3). John Carlson and Martin Fehervary also scored, and Darcy Kuemper stopped 31 shots.

Nils Hoglander scored for the Canucks (9-11-3), who had won three in a row. Spencer Martin made 23 saves.

Ovechkin nearly netted a hat trick when Vancouver pulled Martin for an extra skater with just over six minutes left, but his rocket of a shot skimmed the outside of the post.

Instead, it was Fehervary who sealed it, flipping the puck high into the Canucks zone and into the empty net at 15:57 of the third period.

LOS ANGELES (AP) — Andre Burakovsky had two goals, including the winner in overtime, and Seattle defeated Los Angeles in the highest-scoring NHL game this season.

Burakovsky scored on a power play at 2:08 of the extra session to give Seattle the first six-game winning streak in franchise history.

Matty Beniers and Jared McCann each had two goals in the highest-scoring game of the Kraken’s two-year existence. Alex Wennberg, Daniel Sprong and Oliver Bjorkstrand also scored, and Martin Jones made 27 saves.

BOSTON (AP) — Taylor Hall scored twice and Boston extended its NHL-record streak of home victories to open a season to 13 games with a win over Tampa Bay.

Backup goalie Jeremy Swayman made 27 saves and Brad Marchand added an empty-netter for the Bruins, whose 3-2 overtime win over Carolina on Friday broke the record of 11 set by the 1963-64 Chicago Blackhawks and matched by the Florida Panthers last season.

Steven Stamkos had a power-play goal, raising his career point total to 999, and Andrei Vasilievskiy stopped 23 shots for Tampa Bay. The Lightning had won six of their last seven games.

Noah Dobson scored for the Islanders, who had won four in a row. Ilya Sorokin made 30 saves.

Last season, the Flyers became the first team in NHL history to have a pair of 10-game losing streaks within the first 40 games of a season. They lost 10 straight from Nov. 18 to Dec. 8 before setting a franchise record with 13 consecutive defeats between Dec. 30 and Jan. 25. The first skid cost coach Alain Vigneault his job, the second one came with interim coach Mike Yeo in charge.

Mark Scheifele added a goal and two assists, and Josh Morrissey had a goal and an assist. Cole Perfetti contributed three assists for the Jets (14-6-1).

Hellebuyck’s third shutout of the season and 31st of his career began a four-game homestand at Canada Life Centre, where the Jets are 8-2-0.

Alexandar Georgiev stopped 18 shots for Colorado (12-7-1), which opened a four-game trip. It was the second time this season the Avalanche were shut out.

Rasmus Andersson, Jonathan Huberdeau, Tyler Toffoli and Andrew Mangiapane each had a goal and an assist, and Brett Ritchie also scored for the Flames. Dan Vladar made 30 saves.

Tkachuk played for Calgary for his first six NHL seasons and was traded to Florida this summer. The 24-year-old Tkachuk was booed Tuesday whenever he touched the puck, but also received a partial standing ovation during a video tribute to him early in the first period.

PITTSBURGH (AP) — Brett Pesce scored at the end of a two-on-none 2:20 into overtime to lift Carolina past Pittsburgh.

The Penguins forced the extra period on Jake Guentzel’s deflection with 58 seconds to go in regulation, but the Hurricanes escaped with the extra point when a weird carom led to a breakaway that Pesce converted for his second goal of the season.

Pittsburgh has lost two straight — both at home — following a 7-1-1 stretch.

MONTREAL (AP) — Kaapo Kahkonen stopped 28 shots for his first shutout for San Jose in a win over Montreal.

Tomas Hertl scored twice in the third period, including an empty-netter. Matt Nieto and Logan Couture also scored as the Sharks opened a four-game set against Eastern Conference teams by snapping a three-game losing streak.

Kahkonen, re-signed in the summer after playing 36 games last season for Minnesota and San Jose, had allowed four or more goals in four of his last five games. Filling in for injured starter James Reimer, Kahkonen recorded his first shutout since March 16, 2021.

Jake Allen made 20 saves for Montreal, which was 0 for 6 on the power play against San Jose’s league-leading penalty kill unit.

Juuse Saros made 34 saves and Colton Sissons also scored for the Predators, who have won two of their last three games. Matt Duchene had two assists.

Nashville played for the first time since last Monday, after a water main break flooded Bridgestone Arena on Friday, leading to the postponement of that afternoon’s game against Colorado and Saturday’s game against Columbus.

Troy Terry scored, and John Gibson made 39 saves for the Ducks, losers of six of seven games.

Brayden Point had a goal and an assist, and the Tampa Bay Lightning beat the Los Angeles Kings 5-2 for a franchise-record 12th consecutive home win
LOS ANGELES, CA・3 HOURS AGO
San Diego Union-Tribune

Sam Reinhart scored 17 seconds into overtime to cap a late scoring flurry and give the Florida Panthers a 4-3 victory over the NHL-leading Boston Bruins on Saturday night.
BOSTON, MA・2 HOURS AGO
San Diego Union-Tribune

Carter Hart made 40 saves for his first shutout of the season in the Philadelphia Flyers' 4-0 victory over the Winnipeg Jets on Saturday night
PHILADELPHIA, PA・2 HOURS AGO
San Diego Union-Tribune

Anthony Edwards had 16 of his 34 points in the pivotal third quarter, D'Angelo Russell scored 25 points and the Minnesota Timberwolves held on for a 117-110 win against the Sacramento Kings
MINNEAPOLIS, MN・2 HOURS AGO
San Diego Union-Tribune