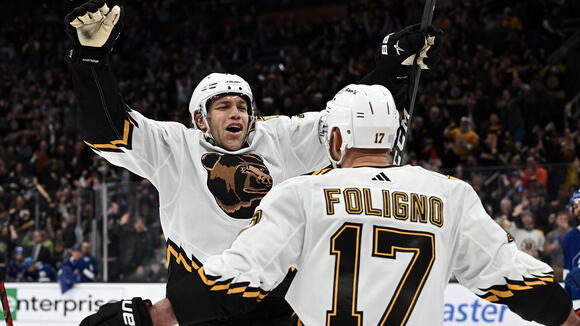 BOSTON - Taylor Hall scored twice and the Boston Bruins extended their NHL-record streak of home victories to open a season to 13 games with a 3-1 victory over the Tampa Bay Lightning on Tuesday night.

Backup goalie Jeremy Swayman made 27 saves and Brad Marchand added an empty-netter for the Bruins, whose 3-2 overtime win over Carolina on Friday broke the record of 11 set by the 1963-64 Chicago Blackhawks and matched by the Florida Panthers last season.

Steven Stamkos had a power-play goal, raising his career point total to 999, and Andrei Vasilievskiy stopped 23 shots for Tampa Bay. The Lightning had won six of their last seven games.

Hall snapped off a shot from the slot for the eventual winner 2:49 into the third period after collecting a pass from Nick Foligno, who started to circle the net before quickly turning and centering the puck.

Swayman came across the crease, flashing his right pad to make a splendid stop on Corey Perry with just under seven minutes left in the game.

Tampa Bay had tied it on Stamkos' score with 1:40 left in the second period.

Swayman stopped about four or five excellent chances in the period before Stamkos scored on a one-timer off a pass from Nikita Kucherov from near the left circle.

In an opening period with few quality scoring opportunities, Hall made it 1-0 just 67 seconds into the game. Positioned in the slot, Hall tipped in Brandon Carlo's shot from the point, with the puck dropping from about waist high and going between Vasilievskiy's pads.

Vasilievskiy robbed Jake DeBrusk's short-handed bid midway into the period with a blocker stop when the winger broke free for a wrister between the circles.

DOWN BUT NOT OUT

Bruins standout defenseman Charlie McAvoy was down for a while after the puck deflected under his visor and hit him on the bridge of his nose. He got up slowly, headed down the runway toward the locker room, but quickly came back and didn't a shift.

NOTES: Stamkos, who had two goals, including the game-winner in a 6-5 OT victory at Buffalo on Monday night, notched his 26th career goal against the Bruins. ... Boston defenseman Derek Forbort returned to the lineup after missing the previous 11 games with a broken finger, and forward Trent Frederic was back after being sidelined the last two games with an undisclosed injury. ... The Bruins beat the Lightning 5-3 in Tampa Bay on Nov. 21. In that game, Boston captain Patrice Bergeron collected his 1,000th career point, becoming the fourth Bruins player to reach that plateau.

TORONTO - Pavel Zacha scored twice in the third period as the Boston Bruins held off the Toronto Maple Leafs 5-2 on Wednesday night. Derek Forbort and Brandon Carlo both had goals in the second period as Boston snapped a three-game winless skid. A.J. Greer also scored in the final period and Linus Ullmark made 33 saves. Mitchell Marner scored on the power play, his 19th goal of the season, for Toronto. Calle Jarnkrok had a goal in the third to keep the Maple Leafs in the game. Ilya Samsonov stopped 24 shots in his eighth consecutive game in net for Toronto. Samsonov...
BOSTON, MA・2 DAYS AGO
CBS Boston

BOSTON -- The NBA trade deadline is a week away, and there hasn't been too much rumbling regarding the Boston Celtics. But Brad Stevens is reportedly looking into bringing back a familiar face.And it's a tough face to forget: Big man Kelly Olynyk. The 6-foot-11 sharpshooter is one of the many members of the Utah Jazz that could potentially move ahead of next week's deadline, and the Celtics are reportedly exploring what it would take to land his services, according to Steve Bulpett of Heavy Sports. The Miami Heat are also interested in a reunion with Olynyk, but a source tells...
BOSTON, MA・1 DAY AGO
CBS Boston

Matthew Judon needs to work on his golf swing

BOSTON -- Matthew Judon is a master of his craft on the football field. On the golf course though, Judon could use a little work.Or maybe a lot of work. New England's lone Pro Bowler took part in Thursday night's Longest Drive Challenge at the NFL Pro Bowl Games, and while Judon can hit the ball a mile, his shots don't go very straight.At least he provided viewers with one of the more humorous moments of the evening. Decked out in his usual red-sleeved look, Judon sent his last shot of the event far right. Really, really far right, just as Judon had predicted prior to the event. But he couldn't even find the ball after he hit his final shot."Where'd it go?" he asked immediately after hitting the ball.That's why Matthew Judon is in the NFL and not on the PGA Tour. And he's pretty darn good at football, racking up 15.5 sacks for the Patriots in 2022 to establish a new career high.Judon did get to celebrate a victory with his AFC teammates too, thanks to a 320-yard drive by Buffalo Bills safety Jordan Poyer that won it for the squad.
BOSTON, MA・23 HOURS AGO
CBS Boston

BOSTON -- If Wednesday night's Celtics-Nets game was a boxing match and not a basketball game, Brooklyn would have been forced to throw in the towel in the first round. No one would have made a boxer go through a full 12 rounds of such a beatdown.But it was indeed a basketball game, so the Celtics got four full quarters to smack the tar out of their Atlantic Division foe. They came out swinging and put a historical whooping on the Nets in a game that shifted between comical to just sad for 48 minutes.The final score was 139-96, but...
BROOKLYN, NY・1 DAY AGO
CBS Boston

BOSTON -- Jaylen Brown is heading to his second NBA All-Star Game. The Celtics' wing was named an All-Star reserve on Thursday.Brown will now join his Celtics teammate Jayson Tatum and head coach Joe Mazzulla (along with the rest of the Boston coaching staff) at the All-Star festivities in Salt Lake City, Utah. The All-Star Game will be held on Feb. 19, with the Skills Challenge, 3-point Contest, and Dunk Contest set to take place the night before on Feb. 18.Brown and the 13 other reserves that were announced Thursday will enter the draft pool for Team LeBron and Team...
BOSTON, MA・1 DAY AGO