Read the latest Phoenix, Arizona news and weather from ABC15 Arizona, updated throughout the day. 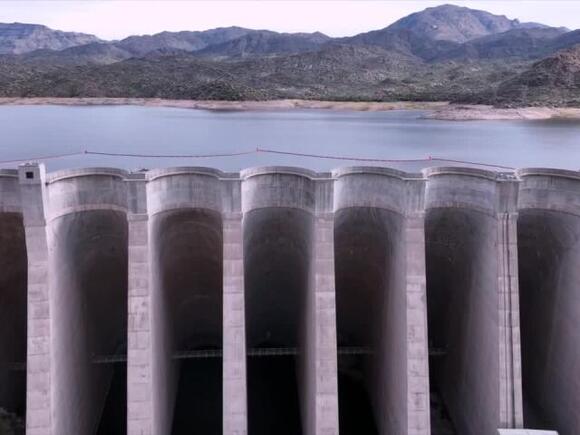 Located about 60 miles northeast of Phoenix, Bartlett Lake is known for boating and fishing.

James Goff of Goodyear said he's been fishing it most of his life.

"Typically, this time of year when the water starts cooling off. The bass will come up and eat as much as they can. And then they'll go deep for the wintertime," he told ABC15.

The lake is known for boating and fishing, but its real job is to collect rain and snowpack on the Verde River before it flows into the Salt River to be diverted to users in the Valley.

"So we can slowly release that water into the canal system to make those deliveries to water treatment plants to ultimately go into homes and businesses," said Ron Klawitter with Salt River Project which manages Bartlett Lake and Dam on behalf of the US Bureau of Reclamation.

A lot of the water that runs through the reservoir will not be making it to those places because flood waters that come after heavy precipitation are too much for the lake and its dam to hold.

So instead of running into canals, the excess water is routed down the normally dry Salt River bed in the Valley.

Some of it percolates into the aquifer below, but much of it evaporates and goes to no beneficial use according to Klawitter.

Enough water to supply 750,000 households for a year that is lost to nature.

But there is a plan to change that.

Nearly two dozen Valley cities, water agencies, and water companies along with the US Bureau of Reclamation are funding a four-year feasibility study on how to capture the water that is currently being lost.

"We identified an option that could actually restore that capacity and create additional storage capacity," he said.

But to get it done they'll have to go about 20 miles north to Horseshoe Dam.

It is the second dam on the Verde River and is even smaller than Bartlett.

About a third of its capacity is unusable due to sediment of the earthen dam, which Klawitter described as a construction flaw of the World War II era dam that was originally built for mining.

"To make sure we had enough copper production to continue the war effort," he said.

Its new purpose will be the battle against drought.

Under the current proposal modified Bartlett Lake would extend back nearly all the way to Horseshoe Lake.

"That proposal would raise Bartlett dam by 97 feet. And it would more than double the storage capacity on the Verde River," Klawitter said.

According to SRP Horseshoe Lake would no longer be used for water storage, but possibly for habitat and flood control.

The project would be a massive and expensive undertaking.

A December 2021 report from the US Bureau of Reclamation estimated it would cost between $700 and $860 million dollars.

Likely more than that amount due to the cost assumptions being in 2018 dollars.

Klawitter said at least half the funding has to come from local entities in exchange for rights to the newly stored water. The remaining funding would come from the federal government.

After the feasibility study, if approved by the public and Congress construction could last for 15 years.

The hope is that it is time and money well spent so folks like Goff can enjoy more water at the lake and in his home.

"It's a beautiful lake. It's close to town. And I, you know, I just, I kind of hate to see things change, but everything has to change and it's for a good thing," he said.

It’s a blue state now… this will never be completed. It will get mired into politics and exploited for cash injects to the Communist Dems

Most of what is seen and heard is how All of the lakes are drying up and how the Colorado River level is unable to keep up and some of call BS to all of it. Now this story how there is excess runoff and its just diverted which us what I've told people is happening everywhere. But no! They blame everything they do on the same things and people Russia did it. It's Trump fault and climate change. 🖕

Completely useless plan...WE DON'T HAVE 15 YEARS...Phoenix will be unlivable in our children's lifetime

The city of Phoenix wants to implement new water conservation policies for future development as its continues attracting residents, companies and big projects to the Valley.
PHOENIX, AZ・5 HOURS AGO
ABC15 Arizona

Different ways you can get around downtown Phoenix and their costs

About one million people are expected to walk around downtown Phoenix for all of the Super Bowl festivities. Traffic and closed roads may make it longer for people to get to their destination.
PHOENIX, AZ・22 HOURS AGO
ABC15 Arizona

The city of Buckeye approved purchasing $80 million worth of groundwater rights to support the growth of its water portfolio.
BUCKEYE, AZ・3 DAYS AGO
ABC15 Arizona

As dozens of Eagles and chiefs fans descended upon Phoenix Sky Harbor International Airport Saturday afternoon, it felt like a calm before the storm.
PHOENIX, AZ・1 DAY AGO
ABC15 Arizona

Local businesses, including Phoenix Coqui, given super boost ahead of Super Bowl

A super boost ahead of the Super Bowl. That's exactly what PepsiCo awarded to five Valley businesses, as part of their effort to help Hispanic-owned small businesses.
PHOENIX, AZ・3 DAYS AGO
ABC15 Arizona

The architect and developer of the Icon at Silverleaf luxury condominium is auctioning his last available penthouse at the Big Game Big Give star-studded charity event and party on Feb. 11.
SCOTTSDALE, AZ・5 HOURS AGO
ABC15 Arizona

Police are investigating a theft of over $100,000 worth of property for the NFL Experience in downtown Phoenix.
PHOENIX, AZ・1 DAY AGO
ABC15 Arizona

Phoenix real estate market falls out of the top 10

For the fifth straight month, the Case Shiller index for the Phoenix market has fallen. Even with the most recent fall, home prices are still higher than at the same time last year.
PHOENIX, AZ・4 DAYS AGO
ABC15 Arizona

One dead after early morning fire in Sun City

One person is dead after a house fire early Friday morning near 107th and Peoria avenues in Sun City.
SUN CITY, AZ・3 DAYS AGO
ABC15 Arizona

There's new fallout surrounding Aspen University and its nursing program. The embattled school in the Valley is now at risk of losing its accreditation.
PHOENIX, AZ・3 DAYS AGO
ABC15 Arizona

Local bakery tossed the opportunity of a lifetime by NFL

Gladys and her husband David opened up the gluten-free bakery in north Phoenix off Cave Creek Road and Rose Garden Lane in 2021.
PHOENIX, AZ・3 DAYS AGO
ABC15 Arizona

Eric Anderson, executive director of the Maricopa Association of Governments intends to retire from the agency after 40 years of service.
MARICOPA, AZ・4 DAYS AGO
ABC15 Arizona

A Valley location of Bed Bath & Beyond is among the stores added to the chain's list to close its doors.
MESA, AZ・5 DAYS AGO
ABC15 Arizona

One dead after crash on SR-87 east of Fountain Hills

One person is dead after a crash early Friday morning on SR-87 near the intersection with Bush Highway east of Fountain Hills.
FOUNTAIN HILLS, AZ・3 DAYS AGO
ABC15 Arizona

If you are familiar with the movie "Top Gun," Czinger Vehicles' 21C might draw some parallels to the fighter jets used on the big screen.
SCOTTSDALE, AZ・7 DAYS AGO
ABC15 Arizona

Last week, ABC15 reported on how Carol Moore could not find an affordable place to live after her complex said they would not renew her lease after nine years.
PHOENIX, AZ・6 DAYS AGO
ABC15 Arizona

According to zoo officials, security cameras are spread across the grounds, including the many gates that house its 3,000 animals.
PHOENIX, AZ・5 DAYS AGO

Read the latest Phoenix, Arizona news and weather from ABC15 Arizona, updated throughout the day.