‘Some jabroni nobody cares about’: Gov. DeSantis weighs in on recent controversial, hateful displays 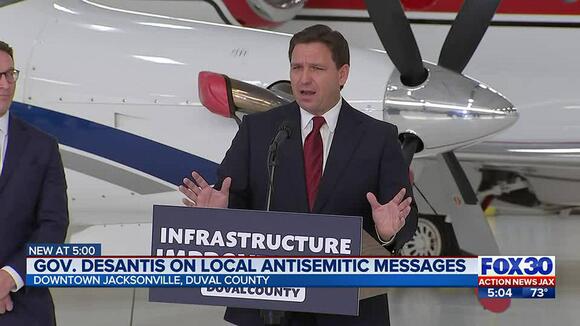 JACKSONVILLE, Fla — Gov. Ron DeSantis is weighing in on recent antisemitic messages broadcast on TIAA Bank Field and a Confederate flag flown over the stadium this past Sunday, calling those behind the acts “jabronis.”

But the governor also criticized media outlets for covering the incidents, accusing them of “manufacturing division.”

The two controversial displays occurred within one month of each other.

First, a neo-Nazi group projected “Kanye was right about the Jews” on the stadium during the Georgia-Florida game and then a group called Save Southern Heritage flew a Confederate flag and the words “Put Monuments Back” ahead of the Jaguars vs. Ravens game.

“I think it’s totally wrong to try to tar an entire city or an entire region as somehow, they’re engaged in hate. That’s just not true,” said DeSantis.

DeSantis addressed the incidents Tuesday, dismissing those that carried out the displays, but also turning his ire on coverage of the incidents.

“I’m concerned when people in the media take some jabroni that nobody cares about and will try to elevate them and make them some type of celebrity,” said DeSantis.

Frazier argued the governor avoided addressing the issue at the heart of the local debate: the city’s two remaining Confederate monuments.

“He should be open, honest and straightforward about what his position is. There’s a need for us to end strife and division and his statements do not lend anything towards that,” said Frazier.

City leaders have been mostly silent since the Confederate flag incident Sunday.

Action News Jax reached out to all 19 city councilmembers Monday, but had still only heard back from four as of Tuesday.

Councilmember Carlucci was the only one to directly call for the monuments’ removal.

“There’s 13 councilmembers that have voted to keep these monuments or to talk about it more. I think the time for talk is over,” said Carlucci.

“There’s no place for hate of any kind in our city,” said Curry in a tweet.

Curry allocated half a million dollars in the city budget to remove the monuments, but putting the money to work is ultimately in the hands of the city council.

A local group hosted a candlelight vigil Sunday to honor those impacted by gun violence and their loved ones
NEPTUNE BEACH, FL・8 HOURS AGO
WOKV

The Democratic Party on Saturday gave its approval to change the order of its 2024 presidential primary, moving South Carolina into the leadoff spot ahead of the Iowa caucus.
IOWA STATE・1 DAY AGO
WOKV

Chinese balloon: Eyewitnesses react to takedown; ‘It looked like a shriveled Kleenex’

An Alabama man is accused of shooting at several people and wounding a woman as the group rode horses on the Florida side of the state border, authorities said.
ALABAMA STATE・13 HOURS AGO
WOKV

Two children that were missing from Missouri were located in High Springs, Florida, in a grocery store Wednesday, a year after they first disappeared.
HIGH SPRINGS, FL・1 DAY AGO
WOKV

An animal rescue in Ohio will write your ex’s name in a litter box to give to the cats and kittens for a $5 donation.
OHIO STATE・1 DAY AGO
WOKV

As a suspected spy balloon continues to float over the U.S., one police department in North Carolina is urging residents to use restraint -- and not try to shoot it down.
GASTONIA, NC・1 DAY AGO
WOKV

Chinese balloon: China threatens repercussions after US shoots down balloon

The U.S. military on Saturday shot down a suspected Chinese spy balloon near the South Carolina coast. The action came hours after the balloon, which Pentagon officials called a “surveillance balloon” was spotted over Charlotte, North Carolina, WSOC-TV reported.
CHARLOTTE, NC・1 DAY AGO
WOKV

Large Chinese reconnaissance balloon spotted over the US, officials say

A massive spy balloon believed to be from China was seen above Montana and is being tracked as it flies across the continental United States, with President Joe Biden for now deciding against "military options" because of the risk to civilians, U.S. officials said on Thursday. Still, officials insisted, they continue to closely monitor the vessel as they have since it entered the country -- while voicing their concern to the Chinese. "The United States government has detected and is tracking a high-altitude surveillance balloon that is flying over the continental United States right now," Brig. Gen. Pat Ryder said in a statement on Thursday. "NORAD [North American Aerospace Defense Command] continues to track and monitor it closely," Ryder said.
MONTANA STATE・3 DAYS AGO
WOKV

A skull that was found in 1997 in a remote area of Alaska has been identified as a man from New York.
ALASKA STATE・1 DAY AGO
WOKV

Reports from the Jacksonville Sheriff’s Office state that an arrest has been made for a murder that took place in 2022.
JACKSONVILLE, FL・10 HOURS AGO
WOKV

Two Memphis Fire Department EMTs who were fired earlier in the week had their licenses suspended Friday by the state.
MEMPHIS, FL・2 DAYS AGO
WOKV

New court documents are giving us a better timeline of the weeks leading up to a local dad’s death.
JACKSONVILLE BEACH, FL・2 DAYS AGO
WOKV

A sixth Memphis police officer was fired Friday following an internal police investigation for his alleged role in Tyre Nichols’ arrest, according to police.
MEMPHIS, FL・2 DAYS AGO