Lakers News: Is Patrick Mahomes The Magic Johnson Of Football? 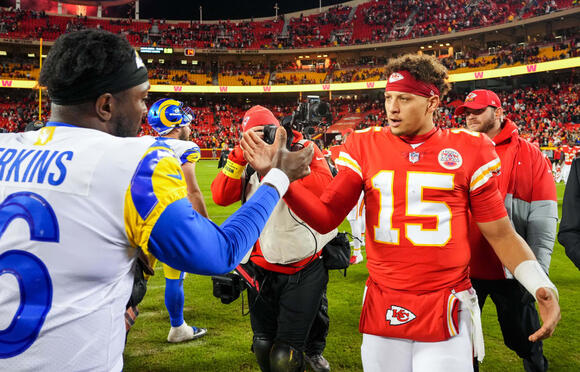 The Lakers Hall of Famer may have a spiritual successor in the NFL.

Legendary sports agent Leigh Steinberg, who has represented players in the NBA, NFL, MLB, boxing and various Olympic sports across a four-decade career, served as the inspiration behind the title character in Cameron Crowe's "Jerry Maguire."

Steinberg recently spoke with Brandon "Scoop B" Robinson of Bally Sports about his career and thoughts on the current sports landscape, among a variety of other topics (check out the full interview here ).

Robinson drew an apt comparison between Hall of Fame Lakers point guard Magic Johnson, a 12-time All-Star who won five championships and three MVP awards with Los Angeles, and Kansas City Chiefs star quarterback Patrick Mahomes, in terms of the way they perform on the field and hardwood.

When asked if he saw the parallel between the duo, Steinberg responded, "I do, and I also see an ambition in both of them to make a real difference off the field, both in terms of charity and in terms of entrepreneurship."

Steinberg has perhaps had the biggest impact in football. He has had eight clients selected as the top pick in their respective NFL drafts.

Several other football luminaries have previously relayed to Robinson their conviction that Mahomes has a lot in common with Johnson, including former NFL kicker Lawrence Tynes and CBS NFL commentator Nate Burleson .

The 27-year-old Mahomes, who has already claimed a Super Bowl championship, Super Bowl and league MVP awards, and four Pro Bowl appearances, has plenty of career left. Let's see where it goes from here. In the short-term, Mahomes has an exciting brand-new project off the field: baby son Patrick "Bronze" Mahomes III, born to Mahomes and wife Brittany yesterday .

I’ll never enjoy covering these stories but whenever someone sadly passes away we need to make sure it’s covered. If you’re a fan of USC or the Los Angeles Rams this persons death might hurt you more than on average. Former Cleveland Browns first round pick, Charles,...
LOS ANGELES, CA・1 DAY AGO
Larry Brown Sports

Patrick Mahomes might need to ask for a little forgiveness from his wife. Mahomes spoke with the media on Monday during Super Bowl Opening Night ahead of Sunday’s big game between his Kansas City Chiefs and the Philadelphia Eagles. The Chiefs quarterback was asked about his Valentine’s Day plans considering the holiday is on February... The post Patrick Mahomes might be in trouble with his wife over 1 comment appeared first on Larry Brown Sports.
KANSAS CITY, MO・11 HOURS AGO
AllLakers

This would be something else.
LOS ANGELES, CA・1 DAY AGO
AllLakers

How much interest, per se?
LOS ANGELES, CA・7 HOURS AGO
OnlyHomers

There have been a number of sad reports coming out of the world of professional wrestling in recent weeks, with former stars passing away, both during their career and following it.
2 DAYS AGO
OnlyHomers

World Wrestling Entertainment (WWE) star Hulk Hogan is "paralyzed" from the waist down, at least according to another legendary wrestler, it has been revealed. Kurt Angle, speaking on an episode of his top-rated podcast on Sunday, said that he and Hogan, 69, spoke backstage when they both appeared at the 30th Anniversary special for WWE’s program “Monday Night Raw.”
2 DAYS AGO
BasketballNetwork.net

Stephen A. lets us in on a private conversation between him and Isiah Thomas about Steph Curry.
18 HOURS AGO
AllLakers

The wrestling world suffered a significant loss on Monday, February 6, 2023, when it was announced that a former professional wrestler has passed away. According to Shantel Potter Brun on Facebook, her uncle, and five-time Heavyweight Champion, "Thunderblood" Charles Norris passed away at age 57.
1 DAY AGO
AllLakers

It's an immediate upgrade, but does it return the Lakers to contention?
LOS ANGELES, CA・2 DAYS AGO
AllLakers

One of sports' biggest villains continues trying to tear down one of its biggest heroes.
LOS ANGELES, CA・2 HOURS AGO
AllLakers

While playing one season in Los Angeles, the forward averaged 7 points and 2.3 rebounds.
LOS ANGELES, CA・1 DAY AGO
AllLakers

Is a Cavs reunion going to happen on the West Coast?
LOS ANGELES, CA・2 DAYS AGO
AllLakers

Here are three options for the Lakers before the trade deadline.
LOS ANGELES, CA・13 HOURS AGO
AllLakers

We were all waiting for it.
DALLAS, TX・2 DAYS AGO
AllLakers

The Nets All-Star may cost more than Los Angeles is willing to give up.
LOS ANGELES, CA・2 DAYS AGO
AllLakers

The Clippers head coach has a unique perspective on the two LA legends.
LOS ANGELES, CA・1 DAY AGO
AllLakers

Lakers: Insider Expects LA To Make A Trade With Any Of These 5 Teams Before Deadline