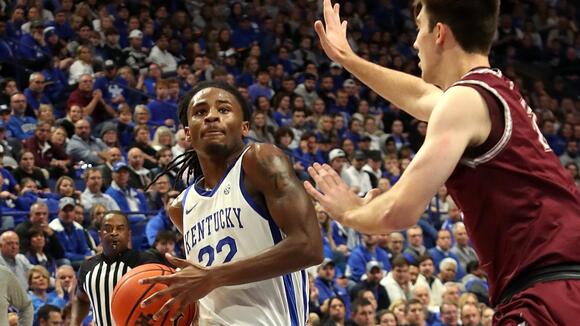 LEXINGTON, Ky. — Maybe this shouldn't have been surprising. After all, Tuesday represented the first time in history Bellarmine's men's basketball program had a swing at Kentucky. The little school that could out of Louisville, the one that stunned the more well-known university in town earlier this month, was itching to knock off the Wildcats, too.

For the better part of 24 minutes of game time Tuesday at Rupp Arena, it appeared the Knights might just do it.

They led for the majority of the first half; Kentucky didn't take its first lead until 5:27 remained before halftime. In the second half, Bellarmine held a four-point advantage (32-28) with 16:08 to go.

Antonio Reeves led Kentucky in scoring with a game-high 18 points on 7-of-15 shooting. Fellow seniors Jacob Toppin (12 points) and CJ Fredrick (11) finished in double-figures as well. Oscar Tshiebwe failed to record a double-double Tuesday, but did pull down 12 rebounds, the game’s high total.

With the pesky Knights dispatched, the Wildcats now prepare to head overseas. UK faces Michigan at 1 p.m. Sunday in London.

Here are three takeaways from the Wildcats’ victory:

Bellarmine a battle-tested bunch. And it showed.

The Knights (2-6), though they lost their fifth straight game, didn't show an ounce of fear Tuesday. That's likely because they've played such a ferocious schedule less than a month into the season. They opened with Louisville. They've played at Duke and UCLA.

So Kentucky merely was the latest member of college basketball's upper crust Bellarmine stared down.

For large stretches of Tuesday's game, the Knights were the better team.

They had more steals (7-6). And they hung tough despite the fact the hosts held a decisive edge in rebounds. (Kentucky had 42, double Bellarmine’s 21.)

One of the most impressive aspects of the performance: The Knights played in Los Angeles Sunday night. They didn’t arrive back in Kentucky until late Monday morning. They barely had a chance to recover from the jet lag of their West Coast jaunt.

Yet there they were in the second half, leading one of the nation’s most storied programs.

Perhaps it finally caught up with them in the game’s latter stages.

Bellarmine coach Scott Davenport and his group acquitted themselves far better than anyone could have imagined, especially given their results since the win at Louisville: a 14-point loss at Morehead State, a 10-point setback at Clemson, a 17-point defeat at Duke and 21-point losses to a pair of California schools (Loyola Marymount on Friday and UCLA Sunday.)

The brutal schedule finally lets up now. There are no more power-conference teams remaining on the slate before Bellarmine begins conference play.

Yet given what the Knights already have achieved this season, it won’t shock anyone if the defending Atlantic Sun Conference tournament champions are in the thick of the league title race again.

Points in the paint the difference

Kentucky and Bellarmine nearly played to a draw in numerous categories Tuesday.

That wasn’t the case when it comes to points in the paint, however. There, the Wildcats exerted their will with ease. They outscored the visitors by 20 points, 28-8.

The points close to the basket were a crucial part of the win, as it took quite some time for Kentucky to find its form from beyond the 3-point line. The Wildcats missed their first six 3-point attempts, and 12 of their first 15. But they finished strong, connecting on four of their last seven shots from distance.

For all its struggles offensively Tuesday, the Wildcats continued finding open teammates in the right spots. UK had 16 assists (on 22 field goal makes), led, not surprisingly, by Sahvir Wheeler’s six.

The good news for Kentucky is Wheeler isn’t the only player who’s distributing the ball effectively. Three other Wildcats had two or more assists Tuesday: Cason Wallace (three), Reeves (two) and Toppin (two).

And there’s room for improvement, too. Alongside his game-high assist tally, Wheeler also had more turnovers (four) than any player, for either team, who took the floor Tuesday.

He’ll need to be more careful with the ball Sunday against the Wolverines to make the trans-Atlantic flight home a happy one for the Wildcats.

Reach Kentucky men’s basketball and football reporter Ryan Black at rblack@gannett.com and follow him on Twitter at @RyanABlack