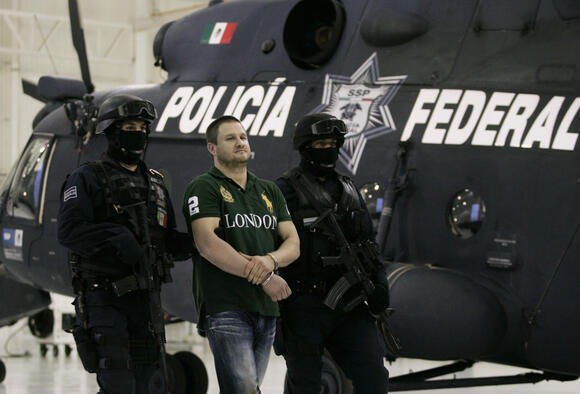 Valdez was extradited to Georgia from Mexico seven years ago and had received a 49-year prison term after pleading guilty to conspiracy to distribute cocaine and launder money.

He was also ordered to pay $192 million in restitution to the U.S. Government.

According to his sentencing documents, Valdez’s release date was set for July 27, 2057.

But inexplicably, he is no longer being held and is listed as “Not in BOP custody” in the Bureau of Prisons database.

The U.S. Bureau of Prisons listing for Edgar Valdez-Villarreal shows he is not being in custody.

Valdez was serving time at a maximum security federal prison in Florida.

His whereabouts are now unknown.

Initially, Valdez is said to have been part of the Sinaloa Cartel working with Joaquin “El Chapo” Guzman-Loera.

According to prosecutors, Valdez was shipping up to 180 kilos of cocaine per month to cities such as New Orleans, Atlanta and Memphis with the drugs coming from Colombia through Mexico on speedboats and airplanes.

In 2008, according to prosecutors, Valdez broke off from the Sinaloa Cartel and aligned himself with the Arturo Beltran-Leyva drug trafficking organization where he also led a group of assassins responsible for a majority of the killings committed by the group.

Valdez was said to be a popular high school football player in his hometown where his coach nicknamed him “La Barbie” because of his pale skin, blue eyes and facial features that compared to the Ken doll.

According to the Reforma, Valdez agreed to become a cooperating witness for U.S. prosecutors six years ago.

ABILENE, Texas (KTAB/KRBC) – On January 1, revelers rang in the new year while Abilene police responded to the 3100 block of College Street in north Abilene. On arrival, officers found 35-year-old Ashley Rapp lying in the street. Rapp was said to be clinging to life with injuries consistent with being run over. She was […]
ABILENE, TX・20 HOURS AGO
BigCountryHomepage

ABILENE, Texas (KTAB/KRBC) – An Abilene man was arrested by a SWAT team after he allegedly threatened his wife with a rifle at her workplace. Shirley Sedberry was taken into custody and charged with Terroristic Threat of Family/Household in connection to the incident Monday, and now remains held in the Taylor County Jail on a […]
ABILENE, TX・4 DAYS AGO
BigCountryHomepage

Editor’s Note: The following arrest and incident reports were supplied by the Abilene Police Department. All information below comes from reports made by responding officers, and all suspects are considered not guilty unless determined otherwise in a court of law. Incidents 800 block of Kirkwood Street – Theft of Motor VehicleA vehicle was involved in […]
ABILENE, TX・2 DAYS AGO
BigCountryHomepage

Editor’s Note: The following arrest and incident reports were supplied by the Abilene Police Department. All information below comes from reports made by responding officers, and all suspects are considered not guilty unless determined otherwise in a court of law. Incidents 1600 block of S 14th Street – Burglary of BuildingPolice responded to a burglary […]
ABILENE, TX・3 DAYS AGO
BigCountryHomepage

Crime Reports: Woman bites Abilene officer as he calls for backup to arrest her

Editor’s Note: The following arrest and incident reports were supplied by the Abilene Police Department. All information below comes from reports made by responding officers, and all suspects are considered not guilty unless determined otherwise in a court of law. Incidents 1200 block of Cypress Street – Family Violence AssaultA victim reported that her common […]
ABILENE, TX・5 DAYS AGO
BigCountryHomepage

Editor’s Note: The following arrest and incident reports were supplied by the Abilene Police Department. All information below comes from reports made by responding officers, and all suspects are considered not guilty unless determined otherwise in a court of law. Incidents 4500 block of S 1st Street – Credit Card or Debit Card AbuseA victim […]
ABILENE, TX・4 DAYS AGO
BigCountryHomepage

EASTLAND, Texas (KTAB/KRBC) – A crash in Eastland resulted in the death of a driver unlawfully evading arrest and non-life-threatening injuries to a passenger, according to a press release from the Texas Department of Public Safety. The incident happened on I-20, one mile west of Eastland around 4:20 p.m. on February 3. The male driver, […]
EASTLAND, TX・2 HOURS AGO
BigCountryHomepage

BIG COUNTRY, Texas (KTAB/KRBC) – Just before 6:00 p.m., the Tye Police Department began a felony pursuit for a person wanted by U.S. Marshals. According to a Facebook post from the Tye Police Department, the pursuit traveled through Tye, Merkel and Abilene with speeds over 110 mph. No one was injured and law enforcement is […]
TYE, TX・22 HOURS AGO
BigCountryHomepage

CHILDRESS COUNTY, Texas (KAMR/KCIT) – The Texas Department of Criminal Justice released information on an ongoing investigation after a package in the T.L. Roach Jr. Unit mail room was found to contain suspected drugs. According to the TDCJ, mail room clerks at the Roach Unit received a package containing a pair of shoes on Jan. […]
TEXAS STATE・1 DAY AGO
BigCountryHomepage

MIDLAND, Texas (KMID/KPEJ) – The Midland Police Department (MPD) is still investigating and looking for the family of a young man with disabilities, found walking alone last weekend in West Midland. According to the MPD, attempts to locate the boy’s parent or guardian have, so far, been unsuccessful. The young man, believed to be between […]
MIDLAND, TX・3 DAYS AGO
BigCountryHomepage

SNYDER, Texas (KTAB/KRBC) – An explosion was reported at Kinder Morgan Plant in Snyder Tuesday morning. The Snyder Volunteer Fire Department says they believe an electrical transformer blew at the gas plant off FM 1611 around 7:00 a.m. Residents around town reported hearing the explosion, some even noticing windows and buildings shake. Right now, no […]
SNYDER, TX・4 DAYS AGO
BigCountryHomepage

MIDLAND, Texas (KMID/KPEJ) – The Midland Police Department (MPD) held a news conference Thursday to update the community about a case involving a teen with disabilities who was found last weekend. The search for the boy’s family has garnered nationwide attention. Midland officers found the non-verbal young man Sunday, January 29, walking alone in an […]
MIDLAND, TX・2 DAYS AGO
BigCountryHomepage

Waiting on a tow can take hours, what Abilene drivers need if they must hit icy roads

ABILENE, Texas (KTAB/KRBC) – With freezing temperatures, roads are icy and dangerous. Local towing companies have been dealing with numerous calls for wrecks. One local tower says he’s receiving hundreds of service calls. Matthew McGough has been working at Maxx Towing and Recovery for years now. From his experience, he said reducing your speed is […]
ABILENE, TX・3 DAYS AGO
BigCountryHomepage

ABILENE, Texas (KTAB/KRBC) – Navy Veteran, weather forecaster, Former Ben Richey Boys Ranch President. Charlie Jordan, by all accounts, was a character. Pouring his all into everything he did, Jordan left a legacy to learn from after his recent passing at the age of 86. Charlie Jordan’s impact on KTAB News: “I’ve been at KTAB […]
ABILENE, TX・1 DAY AGO
BigCountryHomepage

EL PASO, Texas (KTSM)- A Chapin High School teacher is arrested Thursday night. Orlando A. Solis, listed on the El Paso Independent School District website as a math teacher was arrested by the FBI. No specific details released but his charge is listed as in transit/transfer of obscene material to a minor. Solis is also […]
EL PASO, TX・1 DAY AGO
BigCountryHomepage

ABILENE, Texas (KTAB/KRBC) – Several Abilene and other Big Country agencies have reported multiple vehicle crashes Monday morning due to icy driving conditions. Take a look at this wreckage just north of Ballinger: A KTAB/KRBC crew on-site gathered that, due to the slick road conditions, three vehicles and a boat were involved. This crash happened […]
ABILENE, TX・5 DAYS AGO