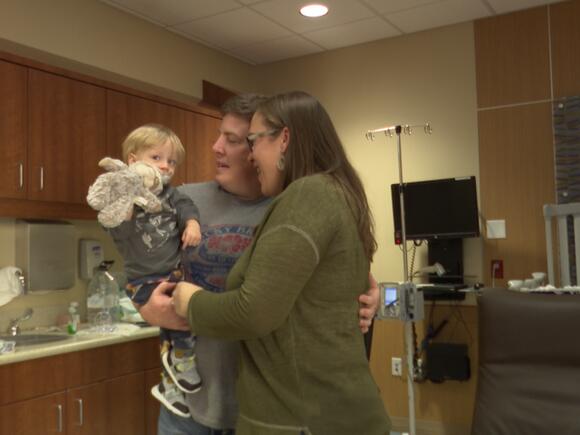 An early season surge of RSV is pushing hospitals around the country to max capacity—a trend that could be heading for Montana.

More than 200 new cases of the virus popped up in Montana last week, numbers doctors say they don't typically see until January.

Dr. Menard Barruga, a pediatric intensivist at St. Vincent Healthcare in Billings, says Montana's largest city is currently an island when it comes to RSV cases, with numbers significantly less than the region—including in the rest of the state.

"Here in Billings especially, we have not seen the barrage the rest of the country is seeing," Barruga said. "Oddly enough, most of the cases that we've had here in the pediatric ICU have come from Bozeman, so I don't know if they're seeing an increased incidence there."

One such family, who was transported by Life Flight from Bozeman Health to St. Vincent's, is the Baxters.

"The first couple days were really, really hard and scary. It’s like, am I going to lose the most important thing in my life?” said Rich Baxter, father of 20-month-old pediatric ICU patient, Ethan Baxter.

Ethan Baxter was feeling much better Tuesday—the last day of his 10-day stay at St. V's.

"We were hearing about it in the news and that it was supposed to be really, really bad this year," said Jess Baxter, Ethan's mom. "But we never thought it would be so bad."

RSV, or respiratory syncytial virus, presents cold-like symptoms and can infect people of any age, though it is especially dangerous in infants and young children.

"It happened so quickly," Rich Baxter said. "We took him into daycare and he seemed fine, but then by the [next] morning we could see he was really laboring to breathe."

The Baxters took Ethan into Bozeman Health, where he was admitted right away. Soon after, doctors told the Baxters they would need oxygen assistance and specialty care.

Ten days later, the Baxters were packing their bags to go home, as Ethan is well enough to be released from the hospital. They're leaving with a deep gratitude to everyone in the hospital, from the doctors and nurses who treated Ethan to the cafeteria staff who provided the hospital with a Thanksgiving dinner.

"It's been a very, very tough 10 days but I am beyond thankful to be here," Rich Baxter said. "I'd be surprised if you could find a better crew than the group here."

"It's nice to know Montana has a hospital like this."

A domesticated duck was found with multiple blowdarts in its body Sunday evening prompting a rescue between volunteers and Bozeman Animal Control.
BOZEMAN, MT・10 HOURS AGO
Q2 News

Fisher had been in the prison since 2019. He was convicted of shooting and killing his father, Wilbur Fisher, in the home they shared.
DAWSON COUNTY, MT・19 HOURS AGO
Q2 News

After undergoing two surgeries in 367 days to remove brain tumors, a Laurel firefighter is now paying it forward by raising money for other brain cancer patients.
LAUREL, MT・23 HOURS AGO
Q2 News

Q2 Billings Area Weather: Cold but getting warmer as the week progresses

High pressure will keep dry conditions in place through the weekend, but daily mountain snow is possible
BILLINGS, MT・12 HOURS AGO
Q2 News

Among the semifinalists is The Backporch BBQ restaurant in Roundup, which has landed a spot in the Best New Restaurant category.
ROUNDUP, MT・4 DAYS AGO
Q2 News

Missoula's housing market has undergone significant changes in recent years, and many of the challenges were exacerbated by the COVID-19 pandemic.
MONTANA STATE・2 DAYS AGO
Q2 News

Brad Burns never imagined he’d be putting his small town on the map when he was featured on the new 8- episode HBO Max series "The Climb."
WYOMING STATE・23 HOURS AGO
Q2 News

Jack Staton was born into music - his dad Q is the choir teacher in Lockwood and a veteran Billings singer himself. So it's no surprise where Jack's life is taking him.
BILLINGS, MT・2 DAYS AGO
Q2 News

Organized by the Montana District 3 VFW Auxiliary, the row of flags lining the cars was for troops to see out their window as they departed the airport to head overseas.
BILLINGS, MT・2 DAYS AGO
Q2 News

The deep freeze often spells troubles for pipes and that's definitely the case in Laurel, as the CVS pharmacy on Southeast 4th Street is now closed after pipes burst.
LAUREL, MT・18 HOURS AGO
Q2 News

“For him, sometimes I don’t medicate him on the weekends, knowing this is going to be a thing,” said Vandenbosch.
BILLINGS, MT・7 DAYS AGO
Q2 News

Details were thin, but Yellowstone County Sheriff Mike Linder confirmed at 7:30 p.m. that at least one person had been shot.
BILLINGS, MT・21 HOURS AGO
Q2 News

For decades, churches across Montana have sheltered people experiencing homelessness, giving them a place to spend the night out of the cold.
BILLINGS, MT・7 DAYS AGO