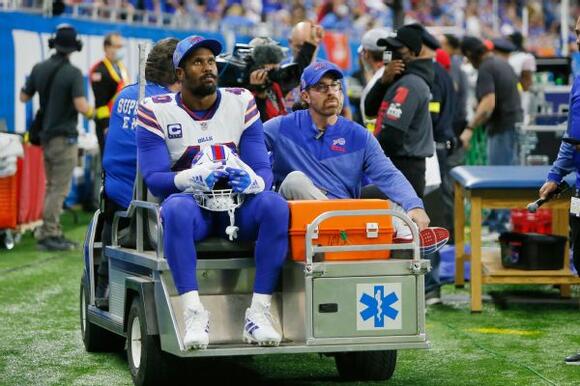 BUFFALO, N.Y. -- Bills pass rusher Von Miller said Tuesday night on his podcast that he did suffer some lateral meniscus damage to his knee, but that he hopes to be back before Buffalo's game against the New York Jets on Dec. 11

"I do have some lateral meniscus damage and it's going to have to be addressed," Miller said on the podcast. "But I do feel like I can, you know, play through that, so I'm just gonna wait a little bit, and let the swelling go down for about 7-10 days and, hopefully, right before the Jets game I will be back."

The Bills host the Jets in Week 14.

Miller also shared on his podcast that free-agent wide receiver Odell Beckham Jr. , Miller's close friend and teammate last year with the Los Angeles Rams , is coming to visit the Bills on Friday.

"Hey man, it ain't over till it's over," Miller said. "He's going to see the Giants , us and the Cowboys . And I think, when he comes here, I don't think he's gonna leave."

Cowboys owner Jerry Jones said Beckham is scheduled to visit with the team on Monday . Beckham is returning from a torn ACL suffered in the Rams' Super Bowl win.

The Bills could use some help at wide receiver, with Jamison Crowder , Jake Kumerow and Marquez Stevenson all on injured reserve. Some talent at the position would bolster an offense that has been inconsistent since the Week 7 bye.

Buffalo plays at the New England Patriots on Thursday night, after which the Bills continue a key AFC East stretch at home against the Jets and Miami Dolphins . Buffalo is 0-2 in division play this season.

"If I'm out there, you know that I'm ready to go and I feel totally confident," said Miller, who was already ruled out for Thursday night's game and has not participated in practice this week.

Miller's injury -- to the same right knee in which he suffered a torn ACL in 2013 -- occurred with less than three minutes remaining in the first half against the Detroit Lions when he appeared to get rolled up on. He quickly went to a knee and spent a couple of minutes talking to trainers on the field. He spent several minutes in the medical tent on the sideline before being carted to the locker room.

Miller ranks third in the NFL in quarterback pressures (38) behind Dallas Cowboys linebacker Micah Parsons (46) and Patriots linebacker Matthew Judon (36). No other Bills player has more than 12 pressures, with Miller's 216 pressure gap the largest in the NFL this season. Miller leads the Bills in sacks (eight), pass rush win rate (23.7%) and pressure percentage (14.6%).

The good news for the Bills is that defensive ends Greg Rousseau (ankle) and AJ Epenesa (ankle) have been full participants in practice this week after missing time due to injuries. Their return would be huge for the defensive line even if Miller was available.

In the meantime, Miller said he continues to look on the positive side of things.

"I don't want nobody feeling sorry for me," Miller said. "I signed a six-year deal, don't feel sorry for me. ... I just got to fight through it, man, and I'll be back. Rehab is going good. I'm feeling good."

An offseason trade of Aaron Rodgers remains an option for the Packers for a variety of reasons, league sources told ESPN.
GREEN BAY, WI・15 HOURS AGO
Sports Illustrated

In the End It Was Mahomes, Ankle and All

Last week he had the world’s most-obsessed-over limb. Now, he has a win over a budding rival and an upcoming trip to the Super Bowl.
KANSAS CITY, MO・36 MINUTES AGO
Cincinnati.com | The Enquirer

A penalty against Cincinnati Bengals linebacker Joseph Ossai after a late hit on Kansas City Chiefs quarterback Patrick Mahomes helped put the Chiefs in range for Harrison Butker's game-winning field goal in Sunday's AFC championship rematch at Arrowhead Stadium. But it was a holding penalty on the same play that...
CINCINNATI, OH・51 MINUTES AGO
ESPN

Doug explains the impact of the uncertainty surrounding Patrick Mahomes, as well as his favorite plays for the NFL's Conference Championship weekend.
20 HOURS AGO
ABC7

Fans filled the streets of Philadelphia after the Eagles' big win over the San Francisco 49ers in the NFC Championship.
PHILADELPHIA, PA・42 MINUTES AGO
ESPN

Joe Burrow and the Cincinnati Bengals are a win away from the Super Bowl. With their Cartier and Gucci-wearing, trash-talking QB leading the way, they're doing it in style.
CINCINNATI, OH・1 DAY AGO
ESPN

Steve Wilks, who went 6-6 as interim coach of the Panthers, was "disappointed but not defeated" after Frank Reich was hired for the full-time job.
CHARLOTTE, NC・2 DAYS AGO
ESPN

Bills safety Damar Hamlin expressed his appreciation for all the love and support he has received over the past month in his first public comments since suffering cardiac arrest on the field on Jan. 2.
PENNSYLVANIA STATE・1 DAY AGO
ESPN

Caesars Sportsbook and others opened the line on Super Bowl LVII at pick 'em Sunday night before the Eagles emerged as 2-point favorites over the Chiefs within an hour of the line posting.
KANSAS CITY, MO・1 HOUR AGO
ESPN

If Eagles fans needed any other reason to get fired up for the NFC title game against the 49ers, some San Francisco fans seem to have temporarily defaced the iconic monument.
PHILADELPHIA, PA・2 DAYS AGO
ESPN

Empire State Building lights up for Eagles' win vs. 49ers

Free agent Breanna Stewart has narrowed her choices down to staying with the Seattle Storm or going to the New York Liberty, sources confirmed to ESPN.
NEW YORK CITY, NY・11 HOURS AGO