Donald McEachin died 20 days after his reelection. Who will serve in his place? 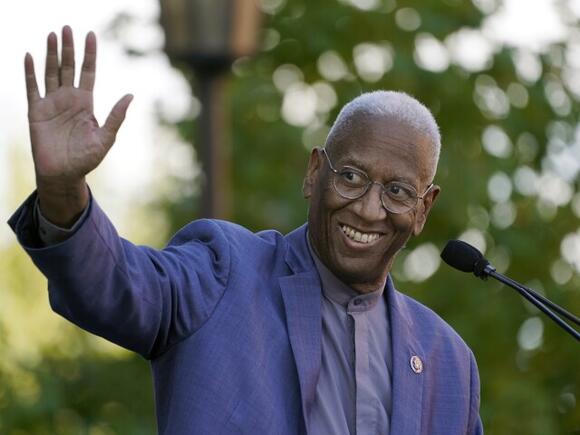 WASHINGTON — U.S. Rep. A. Donald McEachin, D-Va., died Monday after a battle with colorectal cancer, his office said. He was 61. McEachin represented Virginia's 4th Congressional District, which includes part of Richmond and extends south to the North Carolina border. He was reelected to a fourth term earlier this month.

There are several steps that have to be followed before McEachin's seat can be filled.

That special election generally takes place within 120 days of when the vacancy is announced. If the vacancy were announced today, the deadline to hold the election would be Wednesday, March 29, 2023. The deadline for candidates to file would be 60 days before that.

"This is a seat that's really relatively safe Democratic. Republicans are unlikely to win it in 2024 when you're running for president," Holsworth said. "If they're going to have any shot at the seat at all, they have to do it in the special election."

The State Board of Elections said Tuesday there would be no state-run primaries to nominate the candidate, so how the parties will choose their candidates is unclear right now.

U.S. Senator Tim Kaine (D - Virginia) said it was far too early to speculate who might run for McEachin's vacant seat.

"Donald's team has said we're going to serve constituents until there's a successor that's elected. And that's very much what Team McEachin would do," Kaine said. "I was happy to hear them say that because that's what Donald would want. But I hope that there can be a special election promptly within the new year to make sure that the Fourth is represented."

McEachin graduated from St. Christopher’s School in Richmond in 1979, then earned a bachelor’s degree at American University in 1982 and a law degree at the University of Virginia in 1986. He earned a master of divinity degree at Samuel DeWitt Proctor School of Theology at Virginia Union University in 2008.

Live your life to the fullest. Stop the drama. You will never know when your time is up on the earth. RIP

Democrats insisted on running him for office knowing he was terminal. Shame on them!

Former House Speaker Nancy Pelosi reacts to some GOP members heckling Biden during his State of the Union address, calling it "showbiz" to cover putting Medicare and Social Security "on the table."
18 HOURS AGO
The Guardian

(Bloomberg) -- Embattled GOP Representative George Santos showed up early to claim a coveted aisle seat that was well-placed for a chance to shake President Joe Biden’s hand at the State of the Union address, but instead he ended up sparring with Republican Senator Mitt Romney. Most Read from...
UTAH STATE・18 HOURS AGO
The List

President Joe Biden's second State of the Union address since taking office saw the commander-in-chief rallying ordinary Americans and his fellow politicians alike to work together to get the country back on its feet (via The Guardian). Following years of turmoil, thanks to the COVID-19 pandemic and widespread economic disparity, which led to a more divided citizenry than ever before, Biden took an optimistic approach to moving forward.
12 HOURS AGO
WTKR News 3

Biden 2024? Most Democrats say no thank you: AP-NORC poll

A majority of Democrats now think one term is plenty for President Joe Biden, despite his insistence that he plans to seek reelection in 2024.
FLORIDA STATE・2 DAYS AGO
WTKR News 3

Labor Secretary Marty Walsh was reportedly offered a job as head of the NHL Players' Association, with his departure to be announced in the coming days.
22 HOURS AGO
WTKR News 3

'Security failure:' Va. Congresswoman on US response to Chinese balloon

The Democrat-controlled Virginia Senate has passed legislation that would adjust the way state regulators set and oversee Dominion Energy’s electric rates and return on equity.
VIRGINIA STATE・11 HOURS AGO