Saints Blanked by 49ers: By The Numbers 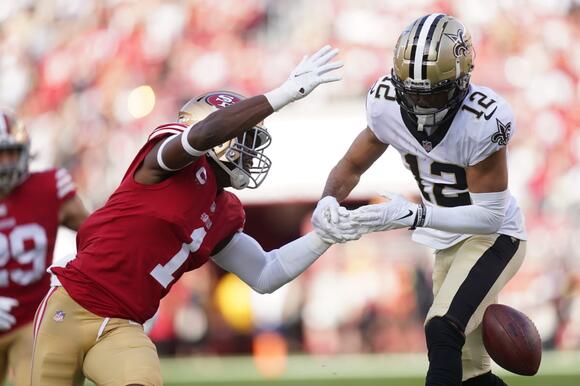 A look inside of the numbers that defined the New Orleans Saints' Week-12 loss to the San Francisco 49ers.

With the loss, the Saints drop to 1-4 on the season away from home and have another difficult road test in Week 13 against the Tampa Bay Buccaneers. New Orleans still plays their three NFC South foes one more time this season, leaving the door open for the NFC South crown. But their offense will need to show signs of life and fast.

Let's dive inside the numbers of the Saints' Week 12 loss to the 49ers.

2: The Saints Were 0-2 in the Red Zone During the 4th Quarter

The New Orleans found themselves knocking on the doorstep in goal-to-go situations twice in the fourth quarter trailing by 13 points. Andy Dalton connected with Alvin Kamara on a check down. He turned upfield and churned his legs toward the end zone before a sea of 49ers swarmed Kamara at the one-yard line. He was walloped, fumbled, and turned over the football for the second time in the contest.

The following Saints' possession was fairly similar. However, this time, the Black and Gold ran four-consecutive passing plays from inside the 49ers' four-yard line resulting in three incomplete passes. Next, Andy Dalton was sacked for 8 yards on fourth down. A turnover on downs.

2.9: The Saints Averaged Less than Three Yards Per Carry vs the 49ers

The 49ers' defense showed the Who Dat Nation why they are regarded as one of the best in the NFL. New Orleans struggled to run the football for most of the contest and could not get Alvin Kamara or Taysom Hill going. Kamara finished the day with seven carries for 13 yards. At the same time, Hill carried the ball six times for 13 yards.

Ironically, Andy Dalton was the Saints' leading rusher. The "Red Rifle" had four carries for 21 yards, including a 10-yard scramble on third down. Running the football has been the key to success for the Saints in 2022, and the 49ers keyed in on that aspect of the Saints' offense.

The New Orleans Saints, one of the NFL's highest-flying offenses of the past two decades, were shut out for the first time since 2001. The Saints saw plenty of opportunities to score with trips to the red zone and a missed field goal from Wil Lutz. These failures ultimately ended the NFL's longest active streak of games without being shut out.

Andy Dalton and company struggled to move the football consistently throughout the game. When the Saints' offense did string together a strong drive, it ended in either a fumble, turnover on downs, or a missed kick. New Orleans' offense continues to struggle with an identity crisis weekly. It faces another difficult defensive test against the Bucs next in Week 13.

Dennis Allen's theme of familiarity echoing in his coaching additions, as he's reportedly adding another part of his staff from his time in Oakland.
NEW ORLEANS, LA・19 HOURS AGO
SaintsNewsNetwork

Dennis Allen looks like he's adding another coach to the Saints staff that he's had previous ties with.
NEW ORLEANS, LA・11 HOURS AGO
SaintsNewsNetwork

A look back at Dennis Allen and the entire New Orleans coaching staff in their first year after replacing Sean Payton.
NEW ORLEANS, LA・1 DAY AGO