What’s next for District 4 seat after death of Congressman McEachin? 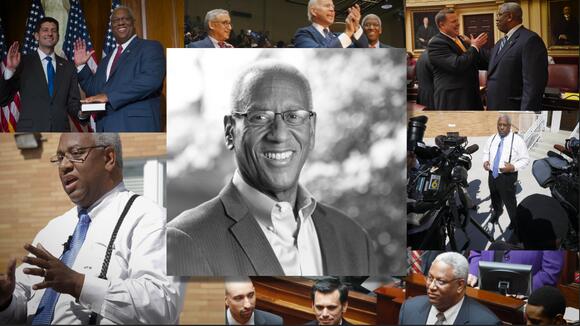 McEachin, who was reelected less than three weeks ago, died at the age of 61 after a battle with colorectal cancer, according to a press release from his office on Monday night. McEachin has represented Virginia’s 4th Congressional District since 2017. He previously served in the General Assembly.

Youngkin, like several other state leaders, said Tuesday it was too early to discuss the upcoming election as Virginia mourns the sudden loss of the congressman.

While Virginians continue to honor McEachin’s legacy, conversations over who could take the seat are starting behind the scenes.

McEachin’s Chief of Staff Tara Rountree said their office will continue to serve Virginia’s 4th District until a new representative is elected.

The 4th district, which McEachin easily won in this year’s midterms, extends from Richmond down to the North Carolina line. Meagher expects it will stay blue in a special election.

“It does mean that a number of politicians in the Democratic Party particularly — because the seat is so strongly Democratic — will be jockeying for a chance to be that nominee for whenever the special election is set,” Meagher said.

Rep. Donald McEachin dies at 61 after battle with colorectal cancer

“I think it’s a little too soon to talk about it, but there is no secret I’ve always wanted to follow in my big brother’s footsteps,” Del. Bagby said, referring to McEachin.

When asked about a potential bid, McClellan said she’s not ready for discussions about the special election.

“We’re mourning him right now and that is a conversation that probably will be had eventually but I’m not prepared to have it right now. I miss my friend and mentor. That’s all I’m focused on today,” McClellan said.

“It’s way too premature for me to say yay or nay,” Sen. Morrissey said. “I will say this. I love being in the [state] Senate. I love being able to do something substantive for Virginia, and I’m not so sure that being one of 435 members would allow me to be as effective.”

Flags in Virginia to be flown at half-staff in memory of Rep. Donald McEachin

Kevin Zeithaml, a spokesperson for Mayor Stoney’s campaign team, said a possible congressional bid “is not on the Mayor’s mind at all right now.”

“He’s mourning the loss of a giant in the Richmond community and, like the rest of the city, will be looking for ways to support the McEachin family and honor his memory in the coming weeks,” Zeithaml said.

Leon Benjamin, the Republican who McEachin defeated in the midterms, said he’s praying for McEachin’s family and hasn’t considered running in the special election but that he’s “keeping all options open.”

Under state law , the governor sets special elections to fill a U.S. House vacancy but isn’t under a specific deadline to do so.

Youngkin remembered McEachin as an “extraordinary public servant” on Tuesday, telling reporters at an event in northern Virginia that discussions about the special election would come but that his attention was on McEachin, his family and honoring the congressman’s legacy.

“We will make decisions with regards to the special election,” Youngkin said. “Today, we’re really focused on remembering the great contributions he [McEachin] made. And there are folks that I’m going to want to listen to as to the best time in order to call this. I want to make sure that Virginians are represented…but today’s a day to really focus on the congressman.”

This story is developing. Stay with 8News for updates.

Petersburg casino bill has narrow path, but odds are stacked in the Virginia General Assembly

The odds are stacked against a bill that would allow Peterburg to put a casino project on the ballot while delaying a second vote in Richmond, but the push still appears to have a narrow path forward in the General Assembly.
PETERSBURG, VA・1 DAY AGO
DC News Now

When will I get my tax refund?

Tax season is officially open and those filers in line for a refund this year may be wondering when the money will land in their accounts.
1 DAY AGO
DC News Now

A second Chinese "surveillance balloon" was spotted flying over Latin America after another one traveling across the continental U.S. was detected earlier in the day, officials confirmed Friday evening.
MONTANA STATE・13 HOURS AGO
DC News Now

BIRMINGHAM, Ala. (WIAT) — Will the Chinese spy balloon float over your town? Using National Oceanic and Atmospheric Administration (NOAA) projection tools, CBS 42 meteorologist Alex Puckett projected the path of the Chinese balloon, which is currently being tracked by U.S. defense officials who confirmed its presence over the country earlier this week. Pentagon officials […]
KENTUCKY STATE・1 DAY AGO
DC News Now

TEMPLE HILLS, Md. (DC News Now) — The family of a Washington, D.C. man who was shot and killed by a now former Prince George’s County police officer in 2020 is frustrated after learning he was offered a plea deal. The victim was 43-year-old William Green. His cousin, Nikki Owens, said she’s devastated and angry […]
WASHINGTON, DC・2 DAYS AGO
DC News Now

McCarthy breaks with Greene on death of Ashli Babbitt

House Speaker Kevin McCarthy (R-Calif.) broke with Rep. Marjorie Taylor Greene (R-Ga.) on Thursday when asked about the death of Ashli Babbitt, who was shot and killed by Capitol police during the Jan. 6, 2021, attack, concluding she was not murdered, as Greene has said. “I think the police officer did his job,” McCarthy told […]
WASHINGTON STATE・2 DAYS AGO
DC News Now

KETTERING, Md. (DC News Now) — Maryland State Police (MSP) said it was investigating the death of a man after a truck hit him Thursday night. Troopers said they received a report about a person being hit at Central Avenue and Campus Way around 7:45 p.m. When they got there, they found that a 34-year-old […]
PRINCE GEORGE'S COUNTY, MD・1 DAY AGO
DC News Now

US downs Chinese balloon over ocean, moves to recover debris

The balloon, which the Pentagon said was being used by China for surveillance, was shot down by a U.S. aircraft at around 2:05 p.m. EST, a military intelligence source told NewsNation.
7 HOURS AGO
DC News Now

An arrest warrant has been issued for Cincinnati Bengals' running back Joe Mixon on one count of aggravated menacing, according to multiple reports.
CINCINNATI, OH・2 DAYS AGO
DC News Now

Senate Majority Leader Charles Schumer (D-N.Y.) told reporters Thursday that there’s no daylight between himself and President Biden on the question of standing firm against negotiating with House Republicans on raising the debt limit until they manage to pass a package of cuts or fiscal reforms. Schumer said Biden and White House staff assured him […]
WASHINGTON STATE・2 DAYS AGO
DC News Now

The team announced Wednesday that he had died. He was 68-years-old.
PITTSBURGH, PA・2 DAYS AGO
DC News Now

Speaker Kevin McCarthy (R-Calif.) on Thursday said he is tasking a bipartisan group of lawmakers with writing a code of conduct for House members, after representatives of both parties expressed concerns about removing members from congressional committees. His announcement came minutes after House Republicans voted to kick Rep. Ilhan Omar (D-Minn.) off the Foreign Affairs […]
2 DAYS AGO
DC News Now

Certain details conflict with what the coroner in the case, and police, initially said.
IDAHO STATE・1 DAY AGO
DC News Now

Bicyclist hit by car, then stabbed to death by driver at California intersection

Investigators in California are still trying to determine why a driver struck a bicyclist with his car and then stabbed him to death in Orange County on Wednesday.
DANA POINT, CA・1 DAY AGO
DC News Now

A massive high altitude balloon passed through the St. Louis area Friday afternoon. A NOAA computer model show which states it could pass over next.
SAINT LOUIS, MO・1 DAY AGO
DC News Now

Winslow argues head trauma he suffered while playing in the NFL entitles him to a shorter sentence under a new California law.
CALIFORNIA STATE・2 DAYS AGO
DC News Now

Sen. Josh Hawley (R-Mo.) is calling for the Senate Homeland Security Committee to investigate what he says is the Biden administration’s “baffling response” to a Chinese surveillance balloon that floated over U.S. missile installations in Montana, triggering alarms at the Pentagon.   “We have an obligation to obtain a full understanding of the surveillance that […]
MONTANA STATE・1 DAY AGO