Buffalo Bills star Von Miller provides update on injury, hopes to be back in Week 14 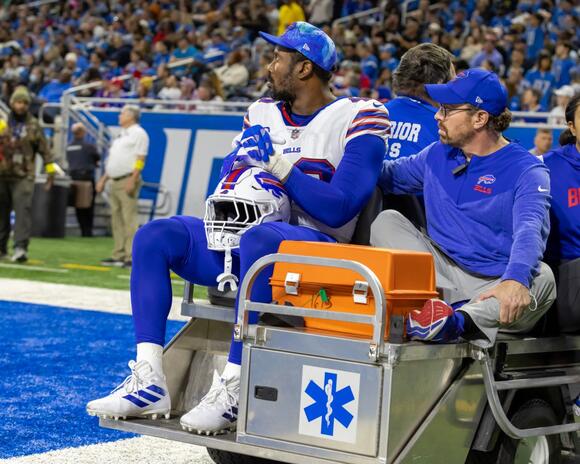 When Buffalo Bills pass rusher and future Hall of Famer Von Miller went down to injury in the first half of their Thanksgiving matchup against the Detroit Lions, we feared it was a season-ender.

Miller had to be carted off to the locker room and didn’t return to action. The obvious fear of a torn ACL popped into the heads of those watching the game in Detroit.

With that said, reports following Buffalo’s narrow win over the Lions indicated that Miller did not suffer an ACL injury . We just didn’t know the extent of the injury until now.

Miller broke some news during his podcast on Tuesday, indicating that he suffered a meniscus injury to the knee and hopes to return Week 14 against the division-rival New York Jets .

“The news is not the best of news, but it’s definitely not the worst of news. It’s kind of in the middle,” Von Miller on injury concern .

Miller did add that the injury will have to be addressed at some point. The hope here is that it can wait until the Bills’ season comes to a conclusion.

Von Miller injury and timeline for a return

Miller was not going to play Thursday against the New England Patriots. Given the severity of the injury and where it happened, that was never going to be in the cards.

Though, a Week 14 return would bring Miller back to the mix more than two weeks after he suffered the injury. This is no small thing when talking about a timeline for a return to action. A lot of this will be reliant on how Miller’s knee responds to the rehab process over the next several days. But the Bills certainly need him in the mix if they are to overcome the Miami Dolphins and win the AFC East this season.

Even in part-time action after signing a long-term deal in free agency this past spring, Miller has proven to still have it as an elite-level pass rusher.

Buffalo heads into Week 13 having racked up 30 sacks on opposing quarterbacks through 11 games. That ranks in the middle of the pack. If the team is going to overcome a recent ho-hum run, Miller will have to be a central part of that.

Patrick Mahomes might need to ask for a little forgiveness from his wife. Mahomes spoke with the media on Monday during Super Bowl Opening Night ahead of Sunday’s big game between his Kansas City Chiefs and the Philadelphia Eagles. The Chiefs quarterback was asked about his Valentine’s Day plans considering the holiday is on February... The post Patrick Mahomes might be in trouble with his wife over 1 comment appeared first on Larry Brown Sports.
KANSAS CITY, MO・10 HOURS AGO
prosportsextra.com

I’ll never enjoy covering these stories but whenever someone sadly passes away we need to make sure it’s covered. If you’re a fan of USC or the Los Angeles Rams this persons death might hurt you more than on average. Former Cleveland Browns first round pick, Charles,...
LOS ANGELES, CA・1 DAY AGO
Sportsnaut

The Kansas City Chiefs are set to play in their fifth Super Bowl on Sunday and their third since 2019.
KANSAS CITY, MO・1 DAY AGO
Sportsnaut

While the Detroit Lions ultimately missed the playoffs, it’s hard to consider their 2022 season as anything less than a
DETROIT, MI・2 DAYS AGO
Sportsnaut

Matt Nagy returned to the Kansas City Chiefs coaching staff in 2022 after being fired as the Chicago Bears head
KANSAS CITY, MO・1 DAY AGO
Sportsnaut

Dallas Cowboys tight end Dalton Schultz emerged as one of the best weapons on the team this past season, playing
DALLAS, TX・15 HOURS AGO
Sportsnaut

Tom Brady states he will not start his broadcasting career with FOX Sports until the fall of 2024 after speaking to network executives last week.
OREGON STATE・1 DAY AGO
Sportsnaut

Now that the Los Angeles Chargers have their face of the franchise, the top priority will be signing Justin Herbert
2 DAYS AGO
Sportsnaut

As the Green Bay Packers await a decision from quarterback Aaron Rodgers regarding his intentions to retire or play in
GREEN BAY, WI・17 HOURS AGO
Sportsnaut

After a whirlwind few weeks that featured all kinds of rumors about Sean Payton, the head coach has landed with
DENVER, CO・5 HOURS AGO
Sportsnaut Silver & Black

Over the last 56 Super Bowls, we have witnessed some incredible quarterback play, and also some lopsided signal caller performances.
8 HOURS AGO
Sportsnaut

Do the St. Louis Cardinals have an unwitting cure for some of the game’s worst ills? If so, the answer
SAINT LOUIS, MO・6 HOURS AGO
Sportsnaut

After four seasons with Kliff Kingsbury at the helm, the Arizona Cardinals are now searching for a new head coach.
4 HOURS AGO
Sportsnaut

Familiar foe: No walk down Sentimental Street for Andy Reid

Andy Reid will stare across the field against familiar uniforms on Sunday but he isn’t going to set aside time
KANSAS CITY, MO・7 HOURS AGO