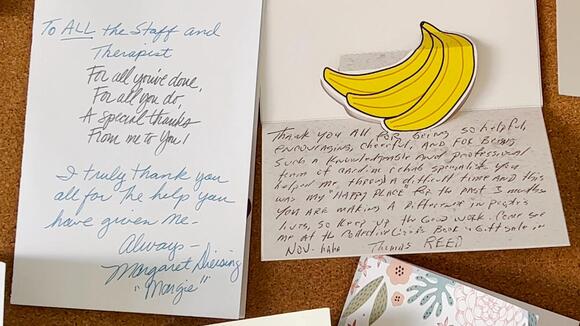 ABILENE, Texas ( KTAB/KRBC ) – We’ve all been inside a hospital. It can be cold, sterile and, daunting at first. But at Hendrick’s Cardiac Rehabilitation Center, underneath the so-called sterile nature, are lifelong friendships made in recovery.

Going up the elevator to the fourth floor of Cedar Mall at Hendrick, it may seem just like every other doctor’s office. It can be cold, it has that certain smell that most hospitals have, and waiting rooms full of chairs. When you walk into the Cardiac Rehabilitation Center, though, it has hints of all of those things mixed with a gym, dumbbells, treadmills and all.

‘I was terrified’: Coleman teen saves dad’s life with help from CCSO’s 9-1-1 operator

For patients recovering from extreme heart conditions, such as heart attacks or having a stint put in, it can be a daunting moment. It can seem cold, until you see the large cork board to the right of the door filled with letters from past patients.

For Parsons, he suffered a serious heart condition in 2006 at the age of 36, and was admitted to Hendrick. He began recovery soon after.

“You never look at your mortality until that time,” revealed Parsons.

Parsons has been in and out of Hendrick’s Cardiac Rehab Center ever since, and has continued coming back for one main reason; the friendly nurses and doctors who tirelessly care for him.

“We’ve looked at cardiac programs at Baylor Scott & White, and this one is as superior as any of them, and I think it’s because of the staff,” Parsons said.

The longtime patient returned Tuesday for the center’s 30th anniversary celebration. He spoke with KTAB/KRBC about those memories, and the unique relationships he’s built along the way. He made mention of Elda Salinas, who worked with him day one.

“The first day I was here, decided I was pushing too hard, so she [Salinas] backed me down,” Parsons said with a smile. “Now, she’s having to get me to pick up the pace.”

Salinas, who said she had never done an interview, and laughed as she said she may never do one again, responded, “When he’s here I’m the boss, and he has to listen to what I have to say.”

Unlike regular hospital visits, Salinas said coming through the rehab center can take months to years in some cases, and those relationships become like family.

Salinas told KTAB/KRBC, over the years, she’s gotten to meet Parsons’ wife, kids, and even some of his 16 grandchildren, “You get to see them progress and really get close to them.”

‘Art will stand the test of time’: Painting unveiled to show appreciation to Hendrick healthcare workers

Not only finding a new friend, but also helping Parsons build the lifestyle changes he needed to make to keep him out of the hospital for good.

Hendrick’s Cardiac Rehabilitation Center sees about 60 patients per day, but Parsons said the staff makes sure each patient is cared for like family even in all the busyness.

ANSON, Texas (KTAB/KRBC) – The radiology department at the Anson General Hospital received a brand-new state-of-the-art CT scanner. The Philips Incisive CT Scanner is one of two in the state of Texas as of now. The first was in Dimmitt, Texas, both created in hopes of providing quality health care in rural areas. Kimberley Jimenez […]
ANSON, TX・1 DAY AGO
BigCountryHomepage

ABILENE, Texas (KTAB/KRBC) – Navy Veteran, weather forecaster, Former Ben Richey Boys Ranch President. Charlie Jordan, by all accounts, was a character. Pouring his all into everything he did, Jordan left a legacy to learn from after his recent passing at the age of 86. Charlie Jordan’s impact on KTAB News: “I’ve been at KTAB […]
ABILENE, TX・20 HOURS AGO
BigCountryHomepage

ABILENE, Texas (KTAB/KRBC) – On January 1, revelers rang in the new year while Abilene police responded to the 3100 block of College Street in north Abilene. On arrival, officers found 35-year-old Ashley Rapp lying in the street. Rapp was said to be clinging to life with injuries consistent with being run over. She was […]
ABILENE, TX・11 HOURS AGO
BigCountryHomepage

Abilene locals share what they learned from the 2021 February freeze

ABILENE, Texas (KTAB/KRBC) – Many Abilenians remember and lived through February freeze of 2021. It was a difficult and dangerous time for many, but it helped prepare the state for winter weather moving forward. Local Abilene resident Natlie Newhouse said this time around she was prepared for the freeze. All her friends spent the night […]
ABILENE, TX・2 DAYS AGO
BigCountryHomepage

‘We remember it and we learn from it’: Former KTAB reporter recalls Space Shuttle Columbia disaster & its visit to Abilene

ABILENE, Texas (KTAB/KRBC) – In 1982, KTAB reporter Dan Huggins was just 23-years-old while reporting live from Dyess Air Force Base. Behind him stood the 90-ton Space Shuttle Columbia on top of a Boeing 747. The pair paid a visit to Dyess for refueling on their way back to Florida. “100,000 people came out to Dyess […]
ABILENE, TX・2 DAYS AGO
BigCountryHomepage

‘Nothing but smoke is all you could see’: Homeowner rushed into smoke to rescue animals after his family of seven escape house fire in Baird

Baird, Texas (KTAB/KRBC) – A family of seven is picking up the pieces after a fire broke out in their home. The homeowner, Edward Underwood, said the fire started in a back bedroom due to faulty electrical wiring. He shared that he was in the kitchen when he started seeing smoke coming from the back […]
BAIRD, TX・15 HOURS AGO
BigCountryHomepage

BRECKENRIDGE, Texas (KTAB/KRBC) – Breckenridge ISD announced a move to the 4-day school week for the 2023-2024 term. The move is a growing one, as there are now six Big Country districts that have made that move. In Breckenridge, some concerns were brought up by parents about situations like childcare. When parents have to work five […]
BRECKENRIDGE, TX・1 DAY AGO
BigCountryHomepage

Happy to feed in times of need: How Eastland hospital cafeteria remains operational during winter storm

EASTLAND, Texas (KTAB/KRBC) – While the Texas roads coat over in a thin, dangerous layer of ice, many are staying home. Maybe you’re catching up on shows, chores, or even working from home. Unfortunately, not all fields of work lend themselves to long distance employees. The staff of Eastland Memorial Hospital’s cafeteria know this all too […]
EASTLAND, TX・2 DAYS AGO
BigCountryHomepage

BIG COUNTRY, Texas (KTAB/KRBC) – Just before 6:00 p.m., the Tye Police Department began a felony pursuit for a person wanted by U.S. Marshals. According to a Facebook post from the Tye Police Department, the pursuit traveled through Tye, Merkel and Abilene with speeds over 110 mph. No one was injured and law enforcement is […]
TYE, TX・13 HOURS AGO
BigCountryHomepage

B-1 Baby on Board: Dyess AFB pilot among first to fly while pregnant

Editor’s Note: The following arrest and incident reports were supplied by the Abilene Police Department. All information below comes from reports made by responding officers, and all suspects are considered not guilty unless determined otherwise in a court of law. Incidents 800 block of Kirkwood Street – Theft of Motor VehicleA vehicle was involved in […]
ABILENE, TX・2 DAYS AGO
BigCountryHomepage

ABILENE, Texas (KTAB/KRBC) – An Abilene man was arrested by a SWAT team after he allegedly threatened his wife with a rifle at her workplace. Shirley Sedberry was taken into custody and charged with Terroristic Threat of Family/Household in connection to the incident Monday, and now remains held in the Taylor County Jail on a […]
ABILENE, TX・4 DAYS AGO
BigCountryHomepage

More than 16,000 days overdue, a book finds its way back to the Abilene Public Library

Editor’s Note: The following arrest and incident reports were supplied by the Abilene Police Department. All information below comes from reports made by responding officers, and all suspects are considered not guilty unless determined otherwise in a court of law. Incidents 4500 block of S 1st Street – Credit Card or Debit Card AbuseA victim […]
ABILENE, TX・3 DAYS AGO
BigCountryHomepage

ABILENE, Texas (KTAB/KRBC) – Several Abilene and other Big Country agencies have reported multiple vehicle crashes Monday morning due to icy driving conditions. Take a look at this wreckage just north of Ballinger: A KTAB/KRBC crew on-site gathered that, due to the slick road conditions, three vehicles and a boat were involved. This crash happened […]
ABILENE, TX・4 DAYS AGO