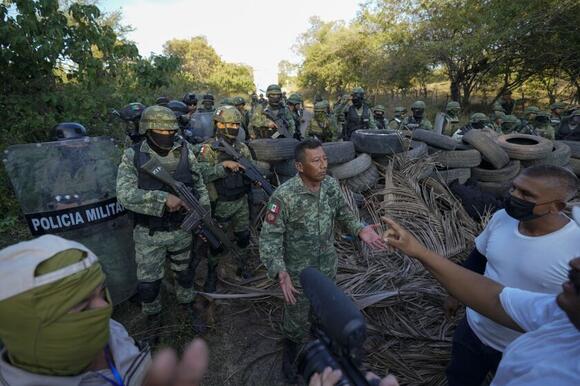 Mexico's Supreme Court upheld on Tuesday a constitutional change that allows the military to continue in law enforcement duties until 2028.

The court ruled against appeals that argued law enforcement should be left to civilian police forces. Critics warned President Andrés Manuel López Obrador is militarizing the country, and ignoring the separation of powers.

Eight of the court's 11 justices voted to uphold the changes that Congress approved in October.

Putting soldiers and marines on the streets to fight crime was long viewed as a stopgap measure to fight the country’s well-armed drug cartels. In 2019, legislators voted that civilian police should take over those duties by 2024.

But López Obrador supports relying on the military indefinitely because he views the armed forces as more honest. The president has given the military more responsibilities than any Mexican leader in recent memory.

The Miguel Agustín Pro Juárez human rights center wrote Tuesday that “the judicial branch has lost an opportunity to act as a counterbalance against the militarization of the country.”

López Obrador has relied almost exclusively on the military for law enforcement. He eliminated the civilian Federal Police force and created the National Guard, which he now wants to hand over completely to the Defense Department.

The president is also relying on the armed forces in other areas , from building infrastructure projects to running airports and trains.

A top Russian diplomat warned the U.S. in July 2022 against proceeding with efforts to bring the country before an international war court. 'Wrath Of God:' Dmitry Medvedev, the deputy secretary of Russia's Security Council, said the U.S. may have to face the "wrath of God" if it helps set up an international tribunal to investigate Russia's action in Ukraine, the Associated Press reported.
12 HOURS AGO
Business Insider

Rep. George Santos' campaign for Congress in 2022 was ultimately successful, but people who worked with him do not remember it fondly.
1 DAY AGO
Business Insider

Fox News host Tucker Carlson compared Justin Trudeau to Fidel Castro and said he was "completely in favor of a Bay of Pigs operation" in Canada.
15 HOURS AGO
Newsweek

The Mil Mi-8 helicopter hit the ground at Vnukovo airport with its blades and tail, Russian media reported.
1 DAY AGO
San Diego Union-Tribune

Woman in groping case with former lawmaker speaks out

A woman who told police she was groped by a former state lawmaker said she is outraged by him calling the incident "laughable."
ALABAMA STATE・2 DAYS AGO
Business Insider

"He is obsessed with retaking Ukraine," former Secretary Gates said of Putin, who launched the war in Ukraine last February. "He will hang in there."
10 HOURS AGO
Business Insider

NEW DELHI, Jan 30 (Reuters) - India's Supreme Court will consider petitions next week against a government order blocking the sharing of clips of a BBC documentary that questioned Prime Minister Narendra Modi's leadership during riots in 2002 in the western state of Gujarat.
20 MINUTES AGO
Reuters

U.S. issues another warning of possible terrorist attacks in Turkey

Survivors of conflict to meet Pope Francis in Congo

GOMA, Congo — (AP) — It took years for Marie Louise Wambale to re-establish her life after fighting between M23 and the Congolese army forced her to flee with almost nothing more than a decade ago. Like most Catholics here in eastern Congo, she hoped that Pope Francis...
38 MINUTES AGO
San Diego Union-Tribune

US urges donors to give far more as Somalia faces famine

The first U.S. Cabinet member to visit Somalia since 2015 is urging the world's distracted donors to give immediate help to a country facing deadly famine
WASHINGTON STATE・12 HOURS AGO
San Diego Union-Tribune