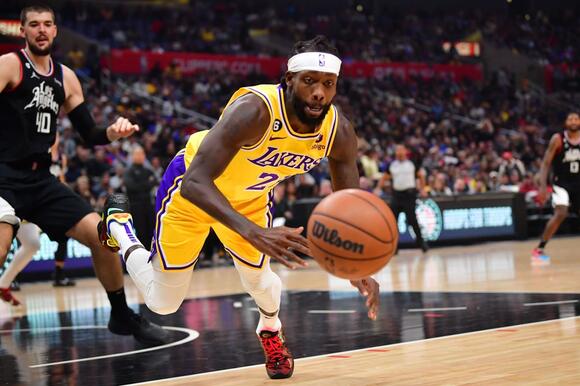 We'll drive him to LAX.

Our long not-quite-national nightmare may soon be over.

Veteran point guard Patrick Beverley, whose most memorable moment during his first (and hopefully only) season with your Los Angeles Lakers thus far happened during a stoppage in play , could be on the move soon, if recent scuttlebutt is to be believed.

Per Jovan Buha of The Athletic , the Los Angeles front office is considering moving on from Beverley once most players signed as free agents in 2022 can be traded.

It's not so much the play of Beverley, which has been nothing to write home about, but rather the 34-year-old's expiring $13 million contract that could hold appeal to teams looking to tank and/or clear up some extra cap space for 2023 free agency. Buha notes that some rival clubs may still be hoping to extract value from the contracts of Beverley or another underwhelming Lakers veteran guard, Kendrick Nunn (who's making $5.3 million on an expiring deal of his own).

This writer suspects that L.A. will need to attach some kind of draft compensation to get off Beverley's contract. Through 14 games for the Lakers, Pat Bev is averaging a brutal 4.1 points with a slash line of .266/.238/.824, along with a respectable 3.9 rebounds, 2.9 assists, and 0.9 steals.

A former 3-and-D specialist, Beverley has slipped to different degrees on both sides of the ball, although it's really the miserable scoring that has done anything but endear him to Lakers fans. His inability to space the floor for stars LeBron James and Anthony Davis isn't exactly mitigated by his defense along the perimeter, which remains above-average (head coach Darvin Ham stuck him on Brooklyn Nets superstar Kevin Durant for extended minutes recently) but no longer at the All-Defensive level.

Beverley is eligible to return to the hardwood for Los Angeles on Wednesday. Dennis Schröder started for three games while Beverley served his suspension for shoving Deandre Ayton in the back during that aforementioned stoppage in play, and is a far better scorer at this point in their respective careers. Who will get the nod now that everyone's available?

LeBron James is being attacked for the way he responded to the video beatdown of Memphis motorist Tyre Nichols on Jan. 7, 2023,. The 29-year-old Black male was beaten to a pulp on the streets of Memphis, Tennessee, following a traffic stop for allegedly driving recklessly, though that was never established by the responding officers.
MEMPHIS, TN・2 DAYS AGO
AllLakers

Could the Lakers add this big at the deadline?
LOS ANGELES, CA・15 HOURS AGO
AllLakers

Any level of veteran leadership is welcome.
LOS ANGELES, CA・1 DAY AGO
AllLakers

The two players were previously teammates with the Washington Wizards.
LOS ANGELES, CA・2 DAYS AGO
AllLakers

That great's jersey is retired in LA, so he had to pivot.
LOS ANGELES, CA・1 DAY AGO
OnlyHomers

World Wrestling Entertainment (WWE) star Hulk Hogan is "paralyzed" from the waist down, at least according to another legendary wrestler, it has been revealed. Kurt Angle, speaking on an episode of his top-rated podcast on Sunday, said that he and Hogan, 69, spoke backstage when they both appeared at the 30th Anniversary special for WWE’s program “Monday Night Raw.”
18 HOURS AGO
AllLakers

Will he keep the pressure on the team president to keep making moves?
LOS ANGELES, CA・1 DAY AGO
AllLakers

This is pretty major.
LOS ANGELES, CA・1 DAY AGO
AllLakers

King James remains one of the league's elites in year 20.
LOS ANGELES, CA・2 DAYS AGO
AllLakers

The Lakers are shorthanded on Monday.
LOS ANGELES, CA・1 DAY AGO
AllLakers

The Lakers may look for a cheaper option that can provide immediate help.
LOS ANGELES, CA・2 DAYS AGO
AllLakers

Lakers Injury News: LA To Be Without At Least One Starter Tuesday Against The Knicks

The verdict is finally in.
LOS ANGELES, CA・12 HOURS AGO
AllLakers

The new Laker has performed admirably in his first three games for LA.
LOS ANGELES, CA・6 HOURS AGO
AllLakers

Here's everything you need to know about Tuesday's matchup.
LOS ANGELES, CA・13 HOURS AGO
AllLakers

Lakers: Watch Dennis Schröder Sink One of the Greatest Half-Court Shots of All-Time

This is a shot you'll have to see to believe.
LOS ANGELES, CA・10 HOURS AGO