We use our journalistic searchlight to illuminate critical issues facing South Dakota, dissect the decisions made by state leaders, and explain the consequences of their policies and the role of politics on South Dakotans. We publish news and commentary that prioritizes accuracy, fairness, insight and civility. There is no charge to access our content, or to subscribe to our email newsletter. We invite and publish guest commentary that contributes to productive public discourse and adheres to our editorial policies. South Dakota Searchlight launched in 2022. We’re an affiliate of States Newsroom, a national 501(c)(3) nonprofit supported by grants and a coalition of donors and readers. The staff of the Searchlight retains full editorial independence. 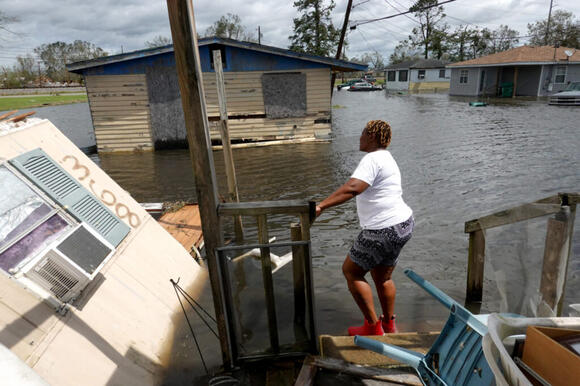 Dina Lewis rescues items from her home after it was destroyed by Hurricane Ida on Aug. 30, 2021, in Laplace, Louisiana. (Photo by Scott Olson/Getty Images)

WASHINGTON — The Biden administration wants Congress to approve more than $37 billion to help communities throughout the country recover from various natural disasters, including Hurricanes Ian, which battered Florida and the Southeast U.S. in late September, and Fiona, which hit Puerto Rico.

The supplemental funding request comes on top of a $9 billion COVID-19 funding request and a third request for nearly $38 billion in additional relief for Ukraine that the White House sent up to Capitol Hill in mid-November.

The most-likely timeline for the three requests to move forward is next month, when Congress must pass spending legislation before a stopgap government funding bill expires on Dec. 16. If some sort of spending package isn’t law before then, a partial government shutdown would begin.

President Joe Biden met with congressional leaders at the White House on Tuesday to discuss the bills that must pass during the current lame-duck session of Congress, including the spending package.

The Biden administration wrote in the 43-page natural disaster funding request that the federal government needs “to help our communities recover and rebuild from extreme weather events and natural disasters.”

“That’s why we are requesting $37.3 billion to fund critical disaster response and rebuilding efforts in Florida, Puerto Rico, and other communities across America that have faced severe flooding, wildfires, drought, and extreme heat over the past year,” the White House budget office wrote in the document.

“As the President often says, we must be there for these communities every step of the way — for as long as it takes.”

The disaster request would funnel $29.6 billion to various federal departments and agencies to continue Hurricanes Ian and Fiona recovery efforts.

Another $7.7 billion would go towards other major disasters and unmet needs, including $100 million for the U.S. Agriculture Department to help with ongoing flood recovery in Kentucky.

The White House proposed Congress provide the U.S. Department of Energy with $270 million to help local, state and tribal governments with electric grid resilience and to offset the impacts of extreme drought on hydropower out West.

Under the disaster request, which must be approved by Congress, the U.S. Department of Homeland Security would get $2.9 billion to “provide survivor claims related to the Hermit’s Peak fire in New Mexico.”

The U.S. Interior Department would receive $262 million to address flooding at the Bureau of Indian Education TóHajiilee Community School in New Mexico and for other natural disasters, like landslides on Denali Park Road in Alaska.

The $29.6 billion request for Hurricanes Ian and Fiona recovery would be divvied up between several U.S. departments, including $3.5 billion for Community Development Block Grant-Disaster Recovery through the Department of Housing and Urban Development and $2.1 billion for the Agriculture Department to provide financial aid for crop damage as well as “payments beyond crop insurance.”

The U.S. Department of Homeland Security, which includes FEMA, would get $15 billion to continue hurricane relief and to make payments from the National Flood Insurance Program to policyholders.

Biden said at the beginning of the Tuesday meeting in the Roosevelt Room that he hoped the four leaders and his administration could “work together to fund the government, COVID, and the war in Ukraine — all controversial and consequential issues.”

Speaker Nancy Pelosi, a California Democrat, and Senate Majority Leader Chuck Schumer, a New York Democrat, said afterward outside the White House they and their GOP counterparts agreed to try to get a full-year government funding bill to Biden before leaving for the winter break.

But House GOP Leader Kevin McCarthy said after Pelosi and Schumer spoke that he would be willing to push off major government funding decisions until next year, when his party regains control of that chamber.

“If we can’t get common sense in appropriations bills then yes, we’ll support a CR and fix this come January,” McCarthy said, referring to continuing resolutions or short-term government funding bills.

McCarthy said he would not back “a blank check for anything” and noted he wanted “to make sure whatever funding” Congress spends on Ukraine aid “goes to the right places.”

Alabama Sen. Richard Shelby, the top Republican on the panel that will draft the spending package, said Tuesday afternoon that natural disaster funding is a possibility since so many states have been affected  this year.

“Florida stands out with a lot of others and I’m sure it’s going to be part of the conversation,” he said, noting that bipartisan talks over government funding are picking up.

Shelby said that he expects Republicans will back some additional aid to Ukraine, saying that when “people are fighting for freedom like that, we should never turn our back.”

The post More than $37 billion in disaster aid under scrutiny in congressional lame duck appeared first on South Dakota Searchlight .

WASHINGTON — President Joe Biden and U.S. House Speaker Kevin McCarthy huddled behind closed doors at the White House on Wednesday in the first of what will likely be several conversations as the country approaches two fiscal cliffs this year amid divided government.  The top issue at the moment is when and how to address […] The post Biden, McCarthy hold ‘productive’ and ‘frank’ debt limit talks as fiscal cliffs loom appeared first on South Dakota Searchlight.
TENNESSEE STATE・3 DAYS AGO
South Dakota Searchlight

WASHINGTON — House Oversight and Accountability Committee Chair James Comer on Monday previewed his priorities for this Congress, which he says will include a heavy focus on the handling of classified documents, the origins of the COVID-19 virus, and what he described as possible “influence peddling” by Hunter Biden. The Kentucky Republican addressed reporters and […] The post U.S. House Oversight chair’s agenda: Hunter Biden, COVID origins, classified documents appeared first on South Dakota Searchlight.
KENTUCKY STATE・5 DAYS AGO
South Dakota Searchlight

U.S. House agrees on something: Lawmakers condemn ‘the horrors of socialism’

WASHINGTON — The U.S. House held a strongly bipartisan vote Thursday, condemning socialism and former socialist leaders, though Democrats rebuked majority Republicans for spending time on a “political stunt” and refusing to allow debate on an amendment that would have clarified Social Security and Medicare are not socialist programs.  Maryland Democratic Rep. Steny Hoyer said […] The post U.S. House agrees on something: Lawmakers condemn ‘the horrors of socialism’ appeared first on South Dakota Searchlight.
WISCONSIN STATE・2 DAYS AGO
South Dakota Searchlight

WASHINGTON — U.S. House Republicans on the Judiciary Committee blamed the Biden administration for fentanyl drug smuggling at the U.S.-Mexico border during a Wednesday hearing. Chair Jim Jordan of Ohio also blamed U.S. Department of Homeland Security Secretary Alejandro Mayorkas for the number of migrants at the border, and said there are already hundreds of […] The post U.S. House Judiciary’s debut hearing on the border centers on blame for fentanyl crisis appeared first on South Dakota Searchlight.
PENNSYLVANIA STATE・3 DAYS AGO
South Dakota Searchlight

PIERRE – Aside from the ongoing saga of censured-and-reinstated Sen. Julie Frye-Mueller, elections were the major theme this week in the Legislature.  Our own Josh Haiar spent Friday morning in the House State Affairs Committee, where he heard debate on a few of the 46 election-related bills filed as of 1 p.m. Friday. Here’s a […] The post Legislative roundup: Elections, transgender kids and Noem’s first signatures appeared first on South Dakota Searchlight.
PIERRE, SD・1 DAY AGO
South Dakota Searchlight

PIERRE — An attempt to change the rules governing the definition of a legal newspaper was defeated Wednesday morning by the Senate Local Government Committee.  SB 80 would allow free distribution newspapers to publish public notices like local government minutes and bid notices if they had a minimum of 200 paid online subscribers and distributed […] The post Attempt to change legal newspaper status fails in committee appeared first on South Dakota Searchlight.
SIOUX FALLS, SD・3 DAYS AGO
South Dakota Searchlight

Treating health care as a commodity has not driven costs lower

Assuring effective health care to a population is a challenge for every society. As care options become more complex — and expensive — the challenges increase. In the U.S. both the organization and the financing of health care are perennial issues in public discussions, political campaigns and among social policy researchers. Basically there are two […] The post Treating health care as a commodity has not driven costs lower appeared first on South Dakota Searchlight.
SOUTH DAKOTA STATE・6 DAYS AGO
South Dakota Searchlight

As states plan how they’ll spend the $25 billion remaining in federal COVID relief funds, some also are facing criticism and renewed scrutiny over how they allocated money already received from the American Rescue Plan Act. Of the $198 billion authorized by Congress in 2021, $173 billion already has been appropriated by states, the District […] The post States criticized for spending federal relief funds on tax cuts, prisons appeared first on South Dakota Searchlight.
COLORADO STATE・3 DAYS AGO
South Dakota Searchlight

We use our journalistic searchlight to illuminate critical issues facing South Dakota, dissect the decisions made by state leaders, and explain the consequences of their policies and the role of politics on South Dakotans. We publish news and commentary that prioritizes accuracy, fairness, insight and civility. There is no charge to access our content, or to subscribe to our email newsletter. We invite and publish guest commentary that contributes to productive public discourse and adheres to our editorial policies. South Dakota Searchlight launched in 2022. We’re an affiliate of States Newsroom, a national 501(c)(3) nonprofit supported by grants and a coalition of donors and readers. The staff of the Searchlight retains full editorial independence.