Photo of Biden with ‘miserable’ Republicans sparks amusement: ‘This should be the White House Christmas card’ 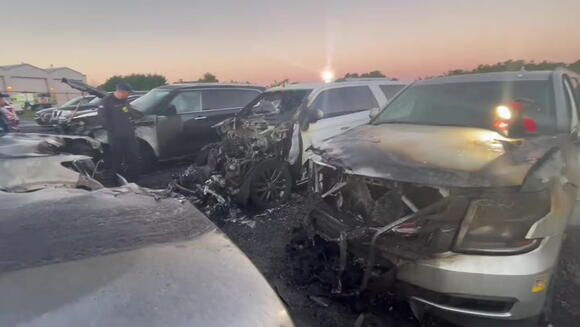 Meanwhile, Senate Majority Leader Chuck Schumer had a coy smile on his face as outgoing House Speaker Nancy Pelosi looked on seemingly amused by the situation.

The meeting took place in the wake of the GOP’s underwhelming performance in the midterm elections, which saw Democrats retain control of the US Senate.

Mr McCarthy, if he is even able to become House speaker, will have a narrow majority of just seven House seats to work with from January.

Mr Biden met with the lawmakers to discuss his priorities for the rest of the lame-duck session, saying the group “made some good progress.”

Republicans had expected to decisively take control of both the House and the Senate earlier this month, but a “red wave” failed to materialise with voters rejecting a string of election-denying Trump-endorsed candidates.

“I asked the four top leaders in Congress whether they’d be willing to come in and talk about what we’re going to do between now and Christmas in terms of legislation,” Mr Biden said on Tuesday.

“And there is a lot to do, including resolving the train strike ... And Congress I think has to act to prevent it. It’s not an easy call, but I think we have to do it.”

The pained look on the face of the Republican leaders was quickly mocked by Twitter users.

“Kevin McCarthy looks as if he’s at a visit to the dentist,” wrote one user.

And another user said: “This should be the White House Christmas card.”

“McCarthy didn’t want to look happy around Biden in case Trump saw the picture,” stated another.

This article forgot to mention the Republicans won back control of the House of Representatives.. the Senate's basically going to stay the way it was?... Most bills have to get through the house to the Senate to be voted on so it seems like the Republicans are going to control things for a while now thank goodness.. no need for this news article to mention that fact now is it?

Hmmmm what the cars electronics must’ve heard & possibly recorded to be torched like that! 🔥 the Biden criminal family drama continues.

Sometimes the aura of stupity rubs off onto others,and it's better to get away as fast as possible, Biden stupity is contagious, look at the 84,000,000 that voted for him.

The Senate minority leader previously said he had no hard feelings toward the men, but his actions said otherwise.
UTAH STATE・19 HOURS AGO
Eden Reports

On Tuesday, President Joe Biden displayed another instance of questionable behavior. A reporter asked him a question about the end of the U.S. state of emergency, which is set for May 11th.
2 DAYS AGO
Business Insider

Last week, lawmakers offered amendments to legislation on the House floor for the first time since May 2016. Democrats say they're into it.
KENTUCKY STATE・2 DAYS AGO
Business Insider

Two House Republicans blurted out what they really thought about Thursday's vote to oust Democratic Rep. Ilhan Omar in what they thought was private.
GEORGIA STATE・14 HOURS AGO
Business Insider

Trump says that if he's reelected he won't use the powers of the presidency to punish his enemies, but adds that he'd be 'entitled to a revenge tour'

In an interview with Hugh Hewitt, Trump went on a tirade against news outlets that reported on Russian interference during the 2016 election.
WASHINGTON STATE・19 HOURS AGO
Business Insider

McKay Coppins, a journalist at The Atlantic, said he was "taken aback" by how often he heard MAGA Republicans say they wish Trump was dead.
MICHIGAN STATE・2 DAYS AGO
RadarOnline

President Joe Biden awkwardly grabbed a reporter’s hand this week and squeezed under her umbrella after being asked about his recent decision to end two Covid-19 national emergencies, RadarOnline.com has learned.The somewhat bizarre incident took place on Tuesday afternoon as the 80-year-old president was departing the White House to visit New York City.While leaving the White House and approaching his helicopter, NBC News Chief White House Correspondent Kristen Welker questioned Biden about his Monday night decision to draw down two Covid-19 national emergencies by May 11.“What's behind your decision to end the Covid emergency?” she asked.But before answering Welker’s question,...
WASHINGTON STATE・1 DAY AGO
Business Insider

"This is about targeting women of color in the United States of America," she says of the vote to remove Rep. Ilhan Omar from the foreign affairs committee.
CALIFORNIA STATE・17 HOURS AGO
The Independent

Marjorie Taylor Greene made a shaky comparison between the killings of Tyre Nichols and Capitol rioter Ashli Babbitt which sickened many on social media this week in the wake of video being released depicting the unarmed motorist’s brutal killing by a gang of police officers.Speaking during a committee hearing, the Georgia congresswoman went on an extended tangent about Ms Babbitt being “murdered” by police.Noting that Ms Babbitt’s mother was in attendance, Ms Greene went on to say that Congress was doing nothing to address the treatment of other participants in the attack, many of whom remain incarcerated ahead of...
GEORGIA STATE・2 DAYS AGO
The Independent

Stormy Daniels offered a fierce blowback to Donald Trump whose attempt to ridicule the adult film star may have backfired as he seemingly appeared to acknowledge their alleged affair.Ms Daniels thanked the former president for “admitting” to their alleged affair despite previously declaring that he “never had an affair”. She also mocked the one-time president for using wrong grammar in his Truth Social post.The war of words between the two on social media came as New York City prosecutors began presenting evidence to a grand jury about the “hush money scheme” Mr Trump is accused of using to keep...
2 DAYS AGO
The Independent

Donald Trump has escalated his feud with Ron DeSantis by posting a video of the Florida governor in which he says wants to be like former House Speaker Paul Ryan, whose now a Trump critic. Mr Trump’s only comment on the footage, which was posted on his Truth Social page on Tuesday, was “wow!”“I would be somebody who would be different, I think you see that I’ve been recognized nationally as being somebody who would be different, who would be a leader, who could be somebody like a Paul Ryan very quickly,” Mr DeSantis says in the footage. Following...
FLORIDA STATE・1 DAY AGO
RadarOnline

Alexandria Ocasio-Cortez is among four House lawmakers accused of paying a Chinese foreign agent to help with their 2022 reelection campaigns, RadarOnline.com has learned. In a surprising development to come as tensions between the United States and China are already at an all-time high, newly released campaign finance records show AOC is one of at least four House members who paid a Chinese newspaper thousands of dollars in campaign funds last year.According to the filings from the Federal Election Commission, AOC paid Sing Tao Newspapers almost $1,500 to run advertisements for her campaign during the 2022 midterms.House Reps. Grace Meng...
CALIFORNIA STATE・16 HOURS AGO
The Independent

Former president Donald Trump on Thursday suggested ending military aid to Ukraine would bring an end to the year-old war by encouraging negotiations that could be led by the United States.Mr Trump made the bizarre claim during an interview with right-wing talk show host Hugh Hewitt for his eponymous radio programme when Mr Hewitt asked if the US should be sending Ukraine’s defence forces F-16 multirole fighters.President Joe Biden has said the US would not be sending Kyiv the fighter jets. But rather than address the question he was asked, Mr Trump told Mr Hewitt the US should “negotiate...
20 HOURS AGO
The Independent

A group of 14 House Democrats are voicing fears that House Republicans’ reversal of security rules enacted after the January 6 attack could allow one of their Republican colleagues to threaten the life of President Joe Biden or other attendees in the House chamber during next week’s State of the Union speech.Mr Biden is set to deliver his annual message to Congress on Tuesday, 7 February. It will be his second State of the Union speech to Congress and his first since Republicans took control of the House by winning a majority in last year’s midterm elections.One of the...
MISSISSIPPI STATE・13 HOURS AGO
The Independent

Congress member Lauren Boebert said Americans owning 46 per cent of the world's guns is not enough and urged people to get the "numbers up".The staunch pro-gun Republican made the remarks during a floor speech on Wednesday while condemning the Bureau of Alcohol, Tobacco, Firearms and Explosives (ATF) after the agency said it will require gun owners to register firearms with pistol braces.A pistol brace is an accessory that is attached to a firearm and the shooter's arm to help shoot more accurately using one hand. The Colorado representative accused the ATF of violating the separation of powers, arguing...
COLORADO STATE・1 DAY AGO
The Independent

House Speaker Kevin McCarthy appeared to dismiss claims from Republican US Rep Marjorie Taylor Greene and other far-right officials that Ashli Babbitt was “murdered” by a US Capitol Police officer after she tried to climb into the House chambers through a broken window during a riot in the halls of Congress on 6 January, 2021.Asked on 2 February whether he agreed with Ms Greene or believed that the officer “did his job” that day, Mr McCarthy said: “I think the police officer did his job.”In her first remarks on the House Oversight Committee this week, Ms Greene appeared to...
GEORGIA STATE・12 HOURS AGO