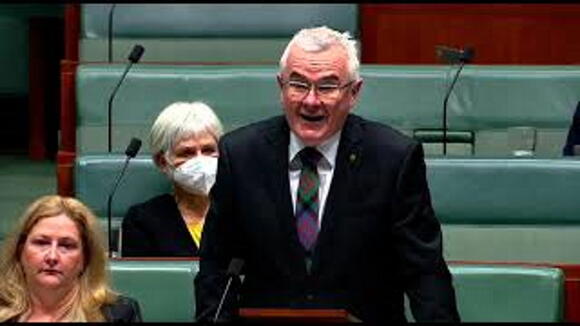 Australia may be the next country to take legislative action against loot boxes in videogames, as MP Andrew Wilkie has introduced a bill calling for a mandatory adult classification for any game that contains a "gambling-type feature."

Introduced on November 28, the bill says loot boxes come in many forms but share some common characteristics, including that they can offer competitive advantages in games and may also have resale value, which collectively confers on them "significant value for players."

"By tempting players with the potential to win game-changing items, encouraging risk-taking for possible reward, delivering random prizes on an intermittent basis, and encouraging players to keep spending money, loot boxes give rise to many of the same emotions and experiences associated with poker machines and traditional gambling activities," Wilkie's explanatory memorandum says. "This is especially concerning as many games which contain these features are popular with adolescents and young adults."

The debate over whether loot boxes are a form of gambling has been going on for years . Some experts say they absolutely are, while game publishers and industry bodies have argued strenuously that—from a legal perspective, at least—they are not. The split opinion is perhaps best illustrated in the UK: The mental health director of the National Health Service said in 2020 that loot boxes effectively teach children to gamble , and that same year the House of Lords called for loot boxes to be classified as a form of gambling. But the country's Gambling Commission, which actually makes the call on these things, has repeatedly ruled that loot boxes are not a form of gambling .

The reason for that position, which has also previously been taken by other bodies including game publishers, rating boards, the Entertainment Software Association , and other gambling regulators , is that items drawn from loot boxes have no monetary value. In order to qualify as gambling, the rewards on offer must either be money, or have real-world value supported through official channels. Not every country buys that argument, of course: Both Belgium and the Netherlands have declared that at least some forms of loot boxes violate their gambling laws, and have thus banned them.

Wilkie said in a statement posted on his website that loot boxes are "gambling by any definition," and that they are "routinely" encountered by children and teenagers across Australia.

"It’s widely acknowledged that the risk-versus-reward nature of loot boxes essentially sets young people up for future gambling addiction," Wilkie said. "The way in which the mechanism entices young people to keep coming back with desirable items is akin to the relationship between a gambler and a poker machine. It’s obvious that young people who are spending a lot of money on these games are being groomed for future gambling."

Unlike Belgium and the Netherlands, however, Wilkie's bill does not seek to outlaw loot boxes directly. Instead, it would require that all games containing loot boxes be rated as either R18+, Australia's equivalent of an AO (Adults Only) ESRB rating in North America, or refused classification entirely—the dreaded RC, which is effectively a ban on the sale of the game in question in Australia. (Adults in Australia can legally own RC content, but stores in the country cannot sell it; it sounds a bit of a silly distinction in this era of global digital storefronts, but technology moves faster than law and this is what happens sometimes.) The bill would also require that all games containing loot boxes be clearly labeled as such, a policy the ESRB adopted in North America in 2020.

Wilkie acknowledged in the text of his bill that this approach, rather than a blanket ban, is a compromise between freedom of access and protection from harm: Australia's Classification Board "still retains some discretion as to the classification of the material," and adults will still have unfettered access to loot boxes. Which is probably a good thing: Our features producer Imogen Mellor recently wrapped up the Overwatch 2 battle pass and discovered that she actually misses the loot boxes from the original game.

The likelihood of the bill becoming law is unclear. Wilkie sits as one of just 10 independent members of Australia's parliament, which means he doesn't have the backing of a party to help push it through the process. But the country has previously displayed a willingness to pursue the matter , and it's also notoriously tough when it comes to videogame regulation. Private members bills like this one are famously challenging to get passed ("famously" being a relative measure in this case), but it's possible that Wilkie could find the required backing to see this one through—or at the very least, that he'll put more pressure on politicians better placed to make it happen.

President Joe Biden and other Western leaders are worried Vladimir Putin will turn to “hybrid tactics” to sow chaos across the world rather than focus on “conventional warfare” in Ukraine, RadarOnline.com has learned.In a concerning development to come as Ukraine continues to fight back against Putin’s forces with the help of its Western allies and their weaponry and intelligence, Western powers suspect the Russian leader will soon change his tactics and start targeting those powers at home.Even more concerning are the newfound fears Putin will launch “a wave of asymmetric chaos” across the West in the form of “political interference,...
1 DAY AGO
PureWow

Australia’s Reserve Bank announced earlier today that the country's five-dollar bill would no longer feature the late Queen Elizabeth's portrait. But, King Charles will not be her replacement either. Instead, the bill will feature a brand new design dedicated to ﻿Indigenous groups.
1 DAY AGO
PC Gamer

Nuclear War Simulator is a bit like Kerbal Space Program, only it's about nuclear annihilation and not technically a game.
22 HOURS AGO
PC Gamer

I am tired of Earth. These people. I am tired of being caught in the tangle of their lives.
18 HOURS AGO
PC Gamer

Web3 anime world Azuki's Twitter got hacked, resulting in some 334,600 followers being exposed to fake mints.
2 DAYS AGO
PC Gamer

For about 2 hours, the fish took control.
1 DAY AGO
PC Gamer

Plus: Dwarf Fortress, Warhammer 40,000: Rogue Trader, Park Beyond, Crisis Core, The Cosiest Games on PC, and much more!
1 DAY AGO
PC Gamer

Zuck me.
1 DAY AGO
PC Gamer

That time Among Us accidentally violated the Geneva Conventions

We've all been there.
1 DAY AGO
PC Gamer

Sony, Microsoft and Nintendo give E3 the brush off

The security flaw discovered in January was causing players to lose cash, progress, and entire accounts.
1 DAY AGO
PC Gamer

Who could have predicted this? Literally, anyone.
2 DAYS AGO