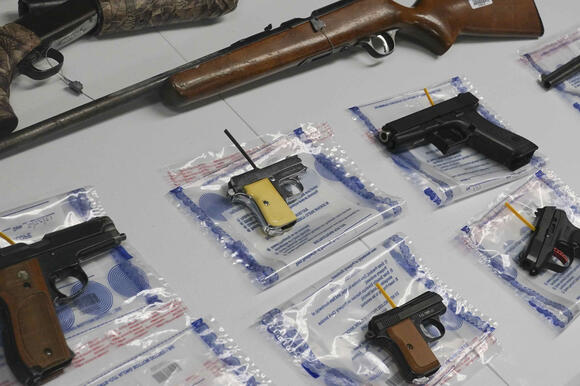 NEW YORK (AP) — The U.S. gun death rate last year hit its highest mark in nearly three decades, and the rate among women has been growing faster than that of men, according to study published Tuesday.

The increase among women — most dramatically, in Black women — is playing a tragic and under-recognized role in a tally that skews overwhelmingly male, the researchers said.

“Women can get lost in the discussion because so many of the fatalities are men,” said one the authors, Dr. Eric Fleegler of Harvard Medical School.

The research is one of the most comprehensive analyses of U.S. gun deaths in years, said David Hemenway, director of the Harvard University’s Injury Control Research Center.

In October, the Centers for Disease Control and Prevention released data on U.S. firearm deaths last year, counting more than 47,000 — the most in at least 40 years.

The U.S. population is growing, but researchers say the rate of gun deaths has been getting worse, too. America’s gun-related homicide and suicide rates both rose 8% last year, each hitting levels not seen since the early 1990s.

In the new study, the researchers examined trends in firearm deaths since 1990. They found gun deaths began to steadily increase in 2005, but the rise accelerated recently, with a 20% jump from 2019 to 2021.

Why did gun deaths rise so dramatically during the COVID-19 pandemic? That’s “a straightforward question with probably a complicated answer that no one really knows the answer to,” said Fleegler, an emergency medicine physician at Boston Children’s Hospital.

The researchers counted more than 1.1 million gun deaths over those 32 years — about the same as the number of American deaths attributed to COVID-19 in the last three years.

In a commentary accompanying the study, three University of Michigan researchers said the paper confirmed racial and sexual differences in U.S. gun deaths and that homicide deaths are concentrated in cities and suicides are more common in rural areas.

“Firearm violence is a worsening problem in the United States,” and will require a range of efforts to control, they wrote.

A “innocent bystander” was shot and killed at a mall in western Massachusetts on Saturday amid a confrontation between two other people, the county prosecutor said.
HOLYOKE, MA・2 DAYS AGO
WPRI 12 News

Police are investigating after a 70-year-old man was killed in Woonsocket Monday.
WOONSOCKET, RI・1 DAY AGO
WPRI 12 News

Police are investigating after one man was reportedly killed and another was injured in a shooting inside a Brockton store Tuesday afternoon.
BROCKTON, MA・10 HOURS AGO
justpene50

A doctor in North Carolina has been convicted after she was caught reusing single-use needles numerous times. According to reports, an ear, nose, and throat surgeon has been arrested and charged with putting patients at risk for infection and possibly even death after she was caught red-handed reusing needles that should be discarded after one use.
2 DAYS AGO
Eden Reports

On Tuesday, President Joe Biden displayed another instance of questionable behavior. A reporter asked him a question about the end of the U.S. state of emergency, which is set for May 11th.
9 HOURS AGO
Eden Reports

In a recent speech, President Joe Biden stated that he had added more to the national debt of the United States than any other president in history, saying, "No President added more to the debt in 4 years than my President… I misspoke - 25% of our country’s entire debt."
2 DAYS AGO
Reuters

LONDON, Jan 30 (Reuters) - Russia told the United States on Monday that the last remaining pillar of bilateral nuclear arms control could expire in 2026 without a replacement due to what it said were U.S. efforts to inflict "strategic defeat" on Moscow in Ukraine.
WASHINGTON STATE・1 DAY AGO
Fox News

Migrants protested in the streets of Hell's Kitchen after the city tried to move them to a new center at the Red Hook cruise terminal in Brooklyn, reports say.
NEW YORK CITY, NY・1 DAY AGO
Newsweek

"There is no other way to talk to these fools," State Duma member and former military commander Andrey Gurulyov said.
1 DAY AGO
NBC News

One person has died and at least three others are left with permanent vision loss because of a bacterial infection possibly linked to a brand of over-the-counter eyedrops, according to the Centers for Disease Control and Prevention. A majority of those affected reported using preservative-free EzriCare Artificial Tears before becoming...
CONNECTICUT STATE・10 HOURS AGO
WPRI 12 News

Guns seized from home after man shot in Providence

Police have identified the man who was reportedly killed by his own daughter in Woonsocket Monday.
WOONSOCKET, RI・12 HOURS AGO
WPRI 12 News

Police are investigating after a person was shot in Providence Monday afternoon.
PROVIDENCE, RI・1 DAY AGO
WPRI 12 News

Jennie Jensen, a South Carolina resident who owns the property, was found lying in the hallway of a third-floor apartment.
PROVIDENCE, RI・16 HOURS AGO
WPRI 12 News

US consumer confidence lags as 2023 gets underway

American consumers are kicking off 2023 slightly less confident than they were at the end of last year as inflation and a potential recession continue to weigh on them.
17 HOURS AGO
WPRI 12 News

WHO: COVID still an emergency but nearing ‘inflection’ point

The coronavirus remains a global health emergency, the World Health Organization chief said Monday, after a key advisory panel found the pandemic may be nearing an “inflexion point” where higher levels of immunity can lower virus-related deaths.
1 DAY AGO
WPRI 12 News

A real zoodunit: Monkeys found but mystery deepens in Dallas

Dallas police said they found the two emperor tamarin monkeys after getting a tip that they could be in an abandoned home in Lancaster, located just south of the zoo.
DALLAS, TX・5 HOURS AGO