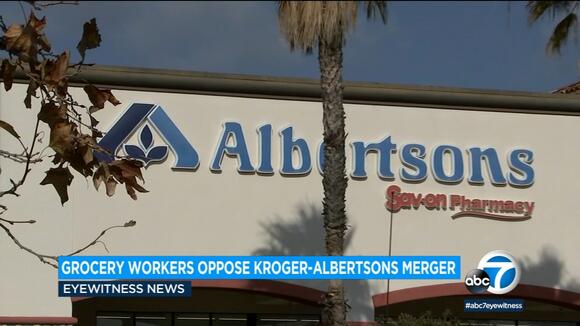 Kroger and Albertsons are planning to merge in a deal worth nearly $25 billion, a proposal that grocery workers' unions say would negatively impact employees and consumers. "If this merger happens, whole families will be disrupted," Judy Wood, an Albertsons member of United Food and Commercial Workers 324, said at a Tuesday morning news conference. "It is estimated over 5,700 workers could lose their jobs, and that's just in Southern California. We need to to everything we can to fight this merger. We need workers, customers and our elected officials to all work together and stop this merger." The Senate Judiciary Committee is holding a hearing Tuesday afternoon to scrutinize the potential impact of the merger. When Christine Martinez found out last month about the planned merger of the two supermarket chains, she thought, "here we go again." Martinez lost her job as a pharmacy technician in the aftermath of a prior supermarket mega-merger: Albertsons' $9 billion tie-up with Safeway in 2014. That deal has since become a cautionary tale of what can go wrong when two supermarket giants merge. Now the fallout from that troubled transaction hangs over this latest, even bigger merger proposal. Back in 2014, Martinez was working for a subsidiary of Safeway in Valencia."It was a really great company," she said. "Morale was very high. They cared about our needs. We could depend on our paychecks." But things changed after Albertsons and Safeway joined together. To win approval for the deal from antitrust regulators, Albertsons and Safeway agreed to sell 168 of their stores to buyers approved by the Federal Trade Commission. The companies' divestiture plan addressed the FTC's competition concerns in communities where the two chains had overlapping stores, which would have given the new company a dominant market share. UC academic researchers, postdoc scholars reach tentative deal but bargaining continues for others

A tentative agreement has been reached in connection to a statewide University of California strike.

With the FTC's blessing, Haggen, a small supermarket chain in the Northwest with just 18 locations, bought 146 of the former Albertsons and Safeway stores, including the one where Martinez worked. Problems emerged quickly. Haggen overhauled the Valencia store and changed the branding and labels. Sales slowed and the company raised prices. The company cut hours and laid off employees. Workers began getting paid every other week, instead of weekly. "Tensions with Haggen were at an all-time high," Martinez said. "I think about how hard it was on my family. It brings me back to a time I don't like to remember." Martinez's store closed. She and dozens of her co-workers lost their jobs. Her store wasn't the only location that Haggen struggled to manage. The grocer expanded more than eight-fold essentially overnight, and couldn't absorb the stores it acquired. Less than a year later, Haggen filed for bankruptcy and closed some locations. In an weird twist, Albertsons bought back dozens of the same stores it previously sold to Haggen in bankruptcy court - at a lower price. Martinez found a new job as a pharmacy technician at a Ralphs supermarket, owned by Kroger. Now she worries Kroger will divest Ralphs as part of its merger with Albertsons in a repeat of the Haggen 2015 deal. "It brought back a lot of fear and anxiety," she said. "My co-workers are feeling anxious. They're hearing that Kroger is going to have to divest. Everyone is worried it will be their store." Kroger and Albertsons say their merger, which they expect to complete in 2024, will help them compete against larger chains and benefit shoppers, workers and local communities. The two companies believe they have a "clear path" to gain regulatory approval, they added. "We expect to make store divestitures in certain areas, and we will work cooperatively with the FTC to obtain clearance for the transaction," Kroger finance chief Gary Millerchip said on a call with analysts last month. To address antitrust concerns that the merger will stifle competition in local markets where they overlap, Kroger and Albertsons plan to divest stores. One way they may do this is by creating a new, standalone company comprised of between 100 and 375 of their current locations. This new entity would be spun off to Albertsons' shareholders. The new company would become an "agile competitor with quality stores" with strong management. "We think it's a really clean option in the sense that it could potentially be a faster way to package up the strategy around divestitures," Millerchip said. But it's not yet clear if the stores to be divested can be viable in the cutthroat grocery industry. If the those locations are weak, or unloaded to a buyer that can't handle them, it could be a repeat of Haggen's swift collapse, antitrust experts warn. "The big question the FTC should ask is how is this different than what they promised before," said Christine Bartholomew, who teaches antitrust law at the University of Buffalo School of Law. Kroger and Albertsons say they must get bigger to compete against larger chains. But it's unlikely that a new, smaller spinoff could successfully handle those same challenges, she said. The CNN Wire contributed to this report.