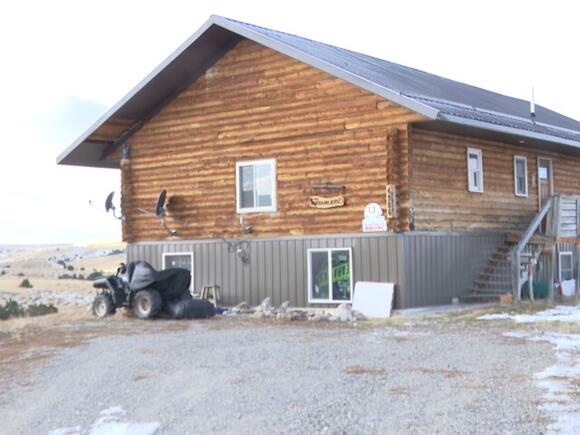 BILLINGS - A family home on Blue Creek Road just south of Billings was shot Sunday afternoon, and although it was an accident, the family was still rattled.

It's the last thing most should worry about — a bullet flying through the walls of our homes and ending up on the kitchen floor. But for Sandy Stanley, that is exactly what happened.

"The fear as far as a parent, I mean, anything could have happened," Stanley said. "We're both lucky that the bullet didn't hit either one of us."

Stanley and her son, Hayden Phelps, were sitting in the living room having a conversation when they were interrupted by the sound of gunfire.

“All of a sudden, there’s just this loud noise out of nowhere," Phelps said. "And then I hear a bunch of clanging noises in the kitchen because that’s where the bullet had landed. So, it was banging off of a bunch of things."

Ultimately, Phelps found the bullet lying on the kitchen floor.

“I was looking at it and I was like ‘that’s a bullet,'" Phelps said as he showed the bullet to MTN. "It was warm obviously, so I knew it had been shot recently."

The family didn't know where the bullet had entered through the walls, and even a visit with the Yellowstone County Sheriff's Office couldn't solve that.

“I even asked the sheriff, ‘have you ever seen anything like this before?’" said Stanley. "And he was like, ‘this is the strangest thing that I have seen today.'"

But it isn't the first time something like this has happened in this area. Another Billings resident, Courtney Winter, said her dad's home in the Blue Creek area has been shot multiple times in the past five years.

“The house has gotten shot over by our kitchen window a couple times, which is kind of scary because we have kiddos,” Winter said.

Fortunately for all, the intent doesn't appear to be malicious, as both Winter and Stanley attribute the bullets to accidental hunting incidents.

“People who live in the area, they don’t realize that there’s houses over the hill," Winter said. "So, they take their shot not really seeing that there is a house right there."

Stanley isn't asking people to stop hunting in the area, but rather to be a little more cautious. She knows that this close call could have ended much differently.

“I really just think that it’s important for people to beware of what’s behind you, what your backdrop is, what’s your surroundings," Stanley said. "Because this could’ve turned out way worse than what it did."

They first rule of safety is to ALWAYS know what's behind your target! Ridiculous and reckless! Some people should not have guns or hunting licenses! SMH We used to let people come on our ranch to hunt, but after having cattle shot, fences driven through or cut, fields and pastures torn up, fires started from idiots driving off the trails..., we had to stop allowing it. Folks complain about not having access- THIS crap is the reason why! Sad that some rotten apples have brought this on. If you're a hunter and you witness that baloney, please turn the idiots in! That's the best thing you can do to preserve access for our safe, common sense, respectful hunters.

Man shot in apparent self-defense in Billings charged with robbery

She's no Superhero or even a non-profit, but on many Sundays you'll find "Wander Woman" around downtown Billings handing out much-needed food and supplies.
BILLINGS, MT・12 HOURS AGO
Q2 News

Details of the harrowing crime were released Thursday in court records charging a 32-year-old man with not only shooting two people but then attempting to rape one of the victims.
BILLINGS, MT・4 DAYS AGO
Q2 News

A man accused of a Jan. 8 crime spree in Billings that left one man dead, another man seriously injured and numerous vehicles damaged or destroyed was arraigned Friday.
BILLINGS, MT・3 DAYS AGO
Q2 News

Construction along Broadway Avenue in Red Lodge is in full swing, as the community attempts to repair the washed-out road before springtime.
RED LODGE, MT・7 HOURS AGO
Q2 News

Details were thin, but Yellowstone County Sheriff Mike Linder confirmed at 7:30 p.m. that at least one person had been shot.
BILLINGS, MT・7 DAYS AGO
Q2 News

The Veazey family suffered the loss of their daughter on New Year's Day. The mother, Morgan Veazey, is now wanting to give back to the hospital that helped them through the difficult time.
BILLINGS, MT・6 DAYS AGO
Q2 News

In Billings, police issued 268 red light citations in 2022 and 169 warnings, and they say there are far more people breaking the red-light law.
BILLINGS, MT・6 DAYS AGO
Q2 News

Tony Seitz started crafting unique beehive boxes after taking up beekeeping with his son. He has been retired since 2009 and enjoys creating the colorful boxes as a hobby.
BILLINGS, MT・5 DAYS AGO
Q2 News

While the wind has backed off near the mountains to the west, it will continue to gust for a few days. Eastern Montana gets cold Thursday.
BILLINGS, MT・5 DAYS AGO
Q2 News

Q2 Billings Area Weather: Windy for now, showers, then quiet for the weekend

Wind is our biggest concern for now, followed by showers Wednesday. But mild temperatures continue all week with a relatively quiet weekend.
BILLINGS, MT・7 HOURS AGO
Q2 News

After undergoing two surgeries in 367 days to remove brain tumors, a Laurel firefighter is now paying it forward by raising money for other brain cancer patients.
LAUREL, MT・7 DAYS AGO
Q2 News

“I had posted a couple of photos just to social media, just joking, like I thought I saw a UFO,” Doak said.
BILLINGS, MT・3 DAYS AGO