A Trivia Tidbit to Start the Matt Rhule Era 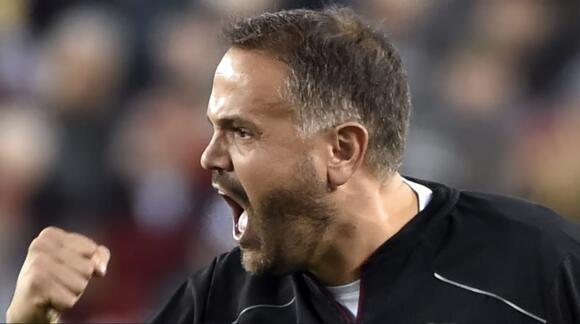 Where did that ubiquitous fist-pump image of Nebraska’s new football coach originate?

It's a picture you've probably seen a dozen times over the last few days: A photoshop job showing Matt Rhule clad in Husker red and pumping a fist.

Rhule even joked about it from the podium Monday afternoon:

"I also want to thank — the picture is in the back — whoever picked that picture of me with the Nebraska red. That has to be at least 10 or 12 years ago and I do not look that good anymore, so I want to thank that person."

You never know, but the following information just might come in handy in a trivia contest, when making a bar bet or when desperately trying to make small talk with the new in-laws. So here goes:

It turns out the original photo is from seven years ago — Halloween night of 2015, to be exact. It was Rhule's third season as head coach at Temple, and the Owls were hosting Notre Dame at Lincoln Financial Field in Philadelphia. Photographer Derik Hamilton , shooting for USA Today Sports, captured the image of Rhule reacting to a play during the first half.

The No. 9 Fighting Irish beat 20th-ranked Temple that night, 24-20 , on a touchdown with a little more than two minutes to play. It was the first of two 10-win seasons for Rhule in Philadelphia.

That was then. Seven years later, Rhule has a few more gray hairs at age 47 as he takes over as the Huskers' head football coach. On the same day he referenced the photo for laughs during the introduction festivities in Lincoln, his young daughters — Leona and Vivienne — also had some fun with the image of their intense-looking dad during an elevator ride:

When they get older, maybe they can tease him about that Under Armour shirt with an Adidas logo slapped on it.

Get your Huskers tickets from SI Tickets here .

Talk about a gold digger... I'm a Panthers fan and the whole fanbase here absolutely despised him as a coach. The contract Tepper gave him was massive for a man that was not qualified enough to be an NFL head coach. Good luck Nebraska, you're gonna need it.

Nebraska grabbed a lead then saw the wheels come off
LINCOLN, NE・1 HOUR AGO
AllHuskers