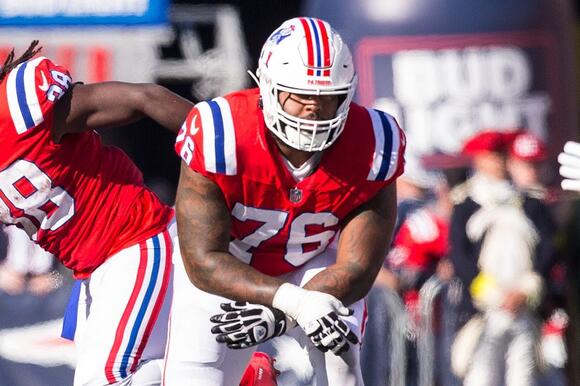 The Patriots listed nine players on their penultimate injury report heading into their Week 13 matchup with the Buffalo Bills at Gillette Stadium.

FOXBORO — The New England Patriots are likely to be without the services of a key component of their running game when they host the Buffalo Bills on Thursday, Dec. 1 at Gillette Stadium.

Still, it may be the status of a pair of offensive linemen which may play a major role in determining their success against the defending AFC East champions.

As the Pats prepare for their 8:15 p.m. ET kickoff on ‘ RedTro ’ Night in Foxboro, here is Tuesday’s full injury and practice participation report, along with its potential implications for both teams.

What it means for the Patriots:

Though it has yet to be officially confirmed, running back Damien Harris’ thigh injury will apparently keep him from playing against Buffalo on Thursday. Per NFL Network , the Alabama product is considered week-to-week going forward; indicating that he may miss time beyond Week 13.

Offensive tackle Isaiah Wynn continues to remain out of action due to a foot injury. The 6-2, 310-pound lineman seems unlikely, at best, to suit up. With swing tackle Yodny Cajuste coming off of his best outing of the year against the Minnesota Vikings in Week 12, the Pats would appear to be set with Cajuste starting at right tackle and Trent Brown on the left protecting quarterback Mac Jones . However, Cajuste was also listed on the injury report, as a limited participant with a calf injury. If neither Cajuste nor Wynn is able to play, New England will undoubtedly look to reserve tackle Conor McDermott, as well as its practice squad for depth at the position.

Safety Jabrill Peppers was the only new name among the non-participants on Tuesday. The Michigan product was sidelined due to illness. With little else known, it is hard to gauge whether Peppers may be cautiously resting, or if the nature of the illness may jeopardize his ability to play against the Bills in Week 13. He has done a serviceable job as both a defensive enforcer and a special teams stalwart. Peppers has logged 38 total tackles and recovered a fumble for 12 yards in 11 games.

Cornerback Jalen Mills has also been a recent addition to the Pats injury report, listed as a limited participant with a groin injury on both Monday and Tuesday. The ‘green goblin’ has arguably been the Pats most consistent corner this season, the LSU product has combined for 31 tackles, along with five passes-defensed and two interceptions. Mills’ name will be one to monitor when the Pats issue their final injury report of the week on Wednesday afternoon.

On the positive front, wideout DeVante Parker was upgraded to a full participant on Tuesday, all but confirming that he will be a full-go against Buffalo. After missing New England’s Week 10 victory over the Indianapolis Colts with a knee injury, the Louisville product has come back strong in Weeks 11 and 12, catching all six of his targets for 99 yards.

What it means for the Bills:

The illness, which has been working its way through Buffalo’s locker room, is apparently beginning to run its course. While five members of the Bills were sidelined due to illness on Monday, only one (reserve tight end Quintin Morris) was out of action for Tuesday’s practice.

With the exception of Dion Dawkins (ankle), the remainder of Buffalo’s walking-wounded returned to full participant status. As a result, the Bills look to be entering Thursday night’s game with a nearly-complete and overwhelmingly healthy roster.

It’s the sound of hearts breaking across Philadelphia and the state of Pennsylvania… and let’s be honest, everywhere else in the country, too. Eagles quarterback Jalen Hurts made a very rare public appearance with his girlfriend Bryonna “Bry” Burrows after the NFC Championship game this past Sunday, which is a surprise to many fans, as he is extremely private about his life outside of football.
PHILADELPHIA, PA・1 DAY AGO
Athlon Sports

The Pittsburgh Steelers and Philadelphia Eagles have been in the NFL since its inception. The two teams even briefly combined forces during World War II and called themselves the Steagles. The players and coaches didn’t like it then and the two fan bases don’t like each other now. Fans from the same state rarely get along and the vitriol was on display after the Eagles made their second Super Bowl in five seasons.
PHILADELPHIA, PA・2 DAYS AGO
Patriot Country

Patriots Country highlights a six-pack of players on whom Pats fans might want to keep watch at this year’s Reese’s Senior Bowl in Mobile, Alabama.
MOBILE, AL・1 HOUR AGO
Patriot Country

Two players from the New England Patriots will draw significant interest this offseason when they become free agents.
1 DAY AGO
Patriot Country

Brady played 23 seasons in the NFL, 20 of which came as a member of the New England Patriots.
MICHIGAN STATE・4 HOURS AGO
Patriot Country

Lynn Bowden becomes the 15th player signed to a futures deal by the Patriots prior to the start of the 2023 league year on March 15.
1 DAY AGO
Patriot Country

The Patriots are expected to be among the NFL's best-situated teams when it comes to financial flexibility and draft capital.
19 HOURS AGO