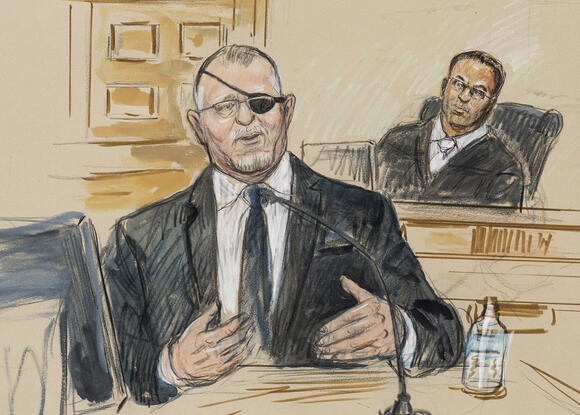 By Lindsay Whitehurst, Alanna Durkin Richer and Michael Kunzelman Oath Keepers founder Stewart Rhodes was convicted Tuesday of seditious conspiracy for a violent plot to overturn Democrat Joe Biden’s presidential win, handing the Justice Department a major victory in its massive prosecution of the Jan. 6, 2021, insurrection. A Washington, D.C., jury found Rhodes guilty of sedition after three days of deliberations in the the nearly two-month-long trial that showcased the far-right extremist group’s efforts to keep Republican Donald Trump in the White House at all costs. The rarely used, Civil War-era charge calls for up to 20 years behind bars. Rhodes didn’t go inside the U.S. Capitol on Jan. 6, but was accused of leading a plot that began shortly after the 2020 election to wage an armed rebellion to stop the transfer of presidential power. Through recordings and encrypted messages, jurors heard how Rhodes rallied his followers to fight to keep Trump in office, warned of a possible “bloody” civil war and expressed regret that the Oath Keepers didn’t bring rifles to the Capitol on Jan. 6. In an extraordinary move, Rhodes and two other defendants took the stand in their defense, opening themselves up to intense questioning from prosecutors. Rhodes told jurors there was no plan to attack the Capitol and insisted that his followers who went inside the building went rogue. On trial alongside Rhodes, of Granbury, Texas, were Kelly Meggs, leader of the Florida chapter of the Oath Keepers; Kenneth Harrelson, another Florida Oath Keeper; Thomas Caldwell, a retired Navy intelligence officer from Virginia; and Jessica Watkins, who led an Ohio militia group. "

"Cheddar News is providing the link to the videos released by the City of Memphis. Warning: The videos are graphic and explicit.By Adrian SainzMEMPHIS, Tenn. (AP) — Memphis authorities released more than an hour of footage Friday of the violent beating of Tyre Nichols in which officers held the Black motorist down and struck him repeatedly as he screamed for his mother.The video emerged one day after the officers were charged with murder in Nichols' death.The footage shows police savagely beating the 29-year-old FedEx worker for three minutes. The Nichols family legal team has likened the assault to the infamous...
MEMPHIS, TN・4 DAYS AGO
Cheddar News

"By An unarmed Black man dies after a videotaped beating by police. The officers involved are fired. After a thorough review of the evidence, criminal charges are swiftly filed against the offending officers.Investigation, accountability and charges.This is often the most Black citizens can hope for as the deaths continue. Nationwide, police have killed roughly three people per day consistently since 2020, according to academics and advocates for police reform who track such deaths.Tyre Nichols' fatal encounter with police officers in Memphis, Tennessee, recorded in video made public Friday night, is a glaring reminder that efforts to reform policing have failed to prevent more flashpoints...
MEMPHIS, TN・2 DAYS AGO
Cheddar News

Alec Baldwin was formally charged with involuntary manslaughter in connection with the fatal shooting of cinematographer Halyna Hutchins during the filming of "Rust" in 2021.
17 HOURS AGO
Business Insider

McKay Coppins, a journalist at The Atlantic, said he was "taken aback" by how often he heard MAGA Republicans say they wish Trump was dead.
MICHIGAN STATE・11 HOURS AGO
Eden Reports

On Tuesday, President Joe Biden displayed another instance of questionable behavior. A reporter asked him a question about the end of the U.S. state of emergency, which is set for May 11th.
16 HOURS AGO
Matthew C. Woodruff

Almost 30,000 people have signed a petition calling for evangelical pastor Franklin Graham to be fired for his support of former President Trump following the deadly Capitol riot. The petition was drawn up by the Christian organization Faith America, which criticizes Graham’s “idolatry” of the former president.
2 DAYS AGO
The Hill

There has been substantial media coverage of President Biden and former Vice President Pence both removing marked classified documents outside the White House after they left the vice presidency (and, in the case of Biden, also including after he was a U.S. senator). Both insist they did so inadvertently.   Of course, the word “inadvertent” does not apply to former President Trump’s behavior. As we now know from Mr. Trump’s own admission, he knew documents he took to Mar-a-Lago were classified…
WASHINGTON STATE・1 DAY AGO
Business Insider

This help line is a growing effort to give Ukraine vital advice on repairs and maintenance as it pushes weapons to their limits.
WASHINGTON STATE・2 DAYS AGO
Insider

"The girls from Ukraine and Switzerland simply ran from me like fire," Anna Linnikova told Evening Moscow.
LOUISIANA STATE・1 DAY AGO
TheDailyBeast

MAGA-boosting radio host John Fredericks has turned on Donald Trump, telling the former president in no uncertain terms on Tuesday that “nobody cares” about his petty media feuds and “grievances” anymore.Fredericks, a longtime supporter of the twice-impeached ex-president, largely took issue with how Trump has seemingly ignored political issues while focusing his attention on far-fetched lawsuits and complaints about “fake news.” Additionally, Fredericks grumbled about Trump privately backing Ronna McDaniel in her successful re-election bid for Republican National Committee chair.“President Trump is going to do what he wants,” Fredericks declared in a clip first flagged by Raw Story. “I think...
22 HOURS AGO
Business Insider

Last week, lawmakers offered amendments to legislation on the House floor for the first time since May 2016. Democrats say they're into it.
KENTUCKY STATE・14 HOURS AGO
MsBirgith

A recent NBC poll revealed that 71% of Americans believe the country is headed in the wrong direction. This is a significant increase from previous polls and suggests a growing sense of unease among the American public.
1 DAY AGO
Newsweek

"There is no other way to talk to these fools," State Duma member and former military commander Andrey Gurulyov said.
1 DAY AGO
Cheddar News

WHO: COVID Still an Emergency but Nearing 'Inflection' Point

"The coronavirus remains a global health emergency, the World Health Organization chief said Monday, after a key advisory panel found the pandemic may be nearing an “inflexion point” where higher levels of immunity can lower virus-related deaths.Speaking at the opening of WHO’s annual executive board meeting, WHO Director-General Tedros Adhanom Ghebreyesus said “there is no doubt that we're in a far better situation now” than a year ago — when the highly transmissible Omicron variant was at its peak.But Tedros warned that in the last eight weeks, at least 170,000 people have died around the world in connection with the...
1 DAY AGO
Cheddar News

"Boeing is set to deliver the last commercial 747 'Jumbo Jet' to Atlas Air this week, closing an era that began 53 years ago with the iconic Pan Am passenger jet. The jet was designed to meet the needs of mass air travel, with its wide body, twin-asiles, and humpback profile. The plane was assembled at Boeing Everett production line in Washington. Atlas Air is a New York-based cargo, charter, and passenger airline. The plane has a cult following among some aviation aficionados. One such fan, Iron Maiden frontman Bruce Dickinson, took the band on tour in its own 747 known as "Ed Force One.While Boeing will no longer produce 747s, jumbo planes are currently experiencing a resurgence. Airlines have started using the larger planes amid delivery delays of newer aircraft. After a difficult couple of years for Boeing following the crash of two 747 Max planes, the company is now seeing a spike in new orders. The company delivered 480 planes in 2022, compared to 340 in 2021, and accepted 774 new orders last year, compared to 479 the year before. "
WASHINGTON STATE・1 DAY AGO
Cheddar News

"The White House is moving ahead with a plan to slash credit card late fees. On Wednesday morning, the Biden administration said the Consumer Financial Protection Bureau (CFPB) will move forward with a proposed rule to reduce typical late fees for missed payments from roughly $30 to $8, saving consumers around $9 billion annually. Rohit Chopra, head of the CFPB, explained that credit card companies started charging higher fees as a way to rack up profits. “Historically, credit card companies charge relatively small penalty amounts for missed payments, but once they discovered that these fees could be a source of easy profits, late...
2 HOURS AGO
Cheddar News

"By Andrew Dalton Cindy Williams, who was among the most recognizable stars in America in the 1970s and 1980s for her role as Shirley opposite Penny Marshall's Laverne on the beloved sitcom "Laverne & Shirley," has died, her family said Monday.Williams died in Los Angeles at age 75 on Wednesday after a brief illness, her children, Zak and Emily Hudson, said in a statement released through family spokeswoman Liza Cranis."The passing of our kind, hilarious mother, Cindy Williams, has brought us insurmountable sadness that could never truly be expressed," the statement said. “Knowing and loving her has been our joy and...
LOS ANGELES, CA・1 DAY AGO
Cheddar News

Labor officials are accusing Apple executives of rules intended to coerce employees, according to Bloomberg.
18 HOURS AGO
Cheddar News

"By Morgan LeeProsecutors linked Alec Baldwin to an expansive list of alleged failures in firearms safety as they filed a felony involuntary manslaughter charge Tuesday against the actor in the fatal shooting of a cinematographer on a New Mexico movie set.Halyna Hutchins died shortly after being wounded during rehearsals at a ranch on the outskirts of Santa Fe on Oct. 21, 2021. Baldwin was pointing a pistol at Hutchins when the gun went off, killing her and wounding the director, Joel Souza.Baldwin and film-set weapons supervisor Hannah Gutierrez-Reed face charges of involuntary manslaughter in the death of Hutchins on the set of the Western movie...
SANTA FE, NM・1 HOUR AGO
Cheddar News

"The ice storm that is pummeling parts of the south is as bad as forecasters thought.More than 1600 flights have been canceled, traffic is snarled and emergency calls for help continue to tick up as conditions remain intense. Dallas police reported a staggering 371 emergency calls.Driving conditions across the Southern Plains up through Arkansas have been treacherous for drivers. A multiple car pileup involving several jackknifed semi-trucks was reported in Reeves County, Texas. A tractor-trailer crash in Arkansas halted traffic for hours on I-40 and at least one person died in Austin, Texas after a 10-car pileup. A Travis County, Texas sherrif was rushed into surgery after being pinned by a truck that lost control.Despite the onslaught of wintry weather across Texas, Governor Greg Abbott said the state's electrical grid was holding up."The power grid itself is functioning very effectively as we speak right now," he said during a press conference. "And there is not anticipated to be any challenge to the power grid in the state of Texas."There was mounting concern about the stability of the state's grid after some 246 people died in 2021 as a result of its failure during a winter storm."
TEXAS STATE・15 HOURS AGO