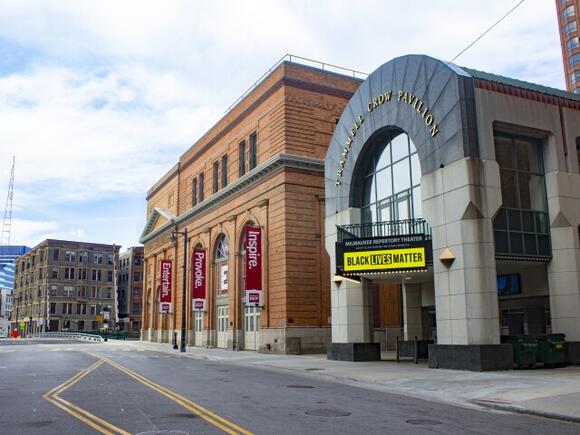 Milwaukee Repertory Theater is looking to expand the arts in our community.

Milwaukee Rep launched its Powering Milwaukee Campaign today to help raise funds for the new Associated Bank Theater Center. Already, the theater group has raised $43 million toward its $75 million goal. Those funds will allow for the construction of a new and expanded theater center with some historic touches.

Highlights of the new theater center would include a new mainstage theater, a fly loft for moving scenery, improved seating and sight lines for patrons, and modern production technology.

"Milwaukee has changed over the last four decades and made impressive investments across the city along the way," says Chad Bauman, Executive Director of Milwaukee Rep. "It's time to invest in another cultural asset — Milwaukee Repertory Theater."

The Powering Milwaukee Campaign is sponsored by Northwestern Mutual and WE Energies, which both committed $1.5 million to the project. Associated Bank committed $10 million. The project will be spread out over three phases, which will allow the theater to remain open during construction.

Northwestern Mutual will be moving employees out of its Franklin campus and into the downtown Milwaukee facility.
MILWAUKEE, WI・12 HOURS AGO
TMJ4 News

Ryan says the biggest draw for Northwestern Mutual is to create a more attractive workplace to convince remote workers to come back to the office.
MILWAUKEE, WI・2 HOURS AGO
TMJ4 News

It's going to be a cold weekend but that isn't stopping organizers and businesses from hosting a wide variety of events!
MILWAUKEE, WI・14 HOURS AGO
TMJ4 News

In 2019, Jasmine Johnikin made a commitment to save lives when she graduated from nursing school. The 28-year-old works full-time as a nurse at Froedert Hospital.
MILWAUKEE, WI・22 HOURS AGO
TMJ4 News

Who's on Third to add second location near Milwaukee airport

The owners of Who's on Third are planning to add a second location near the Milwaukee Mitchell International Airport, according to our partners at the Milwaukee Business Journal.
MILWAUKEE, WI・1 DAY AGO
TMJ4 News

The last place any person would want to be on a bone-chilling night is out in the elements with nowhere to go. For homeless LGBTQ+ individuals, finding shelter can be met with more obstacles.
MILWAUKEE, WI・1 DAY AGO
TMJ4 News

Apartment rents are rising in Milwaukee as nationwide rents have leveled off and decreased, according to our partners at the Milwaukee Business Journal.
MILWAUKEE, WI・22 HOURS AGO
TMJ4 News

We're about a year and a half away from the arrival of the 2024 Republican National Convention and today, we learned a few new details from officials.
MILWAUKEE, WI・9 HOURS AGO
TMJ4 News

Importance of the iconic show 'Laverne & Shirley' set in Milwaukee

The late Cindy Wiliams was best known for her role as Shirley Feeney in the iconic show set in the City of Milwaukee.
MILWAUKEE, WI・2 DAYS AGO
TMJ4 News

A Wisconsin program that started during COVID to offer emergency rental assistance comes to the end at the state level. However, Milwaukee and Waukesha Counties plan to keep theirs going.
MILWAUKEE COUNTY, WI・2 DAYS AGO
TMJ4 News

Valentine's Day is coming up quick, so we put together a list of fun and romantics activities to do in and around Milwaukee on Valentine's Day.
MILWAUKEE, WI・3 HOURS AGO
TMJ4 News

First Stage Theater presents a delightful adaptation of the popular children’s book “Carmela Full of Wishes.” It is a story about a little girl dealing with real-life issues.
MILWAUKEE, WI・1 HOUR AGO
TMJ4 News

It's the perfect way to kick off Black History Month as African Americans' riches range of experiences, struggles, and achievements throughout history are honored and celebrated.
MILWAUKEE, WI・1 DAY AGO
TMJ4 News

Milwaukee getting $4.4M grant to improve safety on streets

Milwaukee is one of hundreds of cities across the U.S. receiving a share of over $800 million in federal grants to improve the safety of streets and intersections.
MILWAUKEE, WI・1 DAY AGO
TMJ4 News

Lakefront Brewery switches to all cans in 2023

Lakefront Brewery is switching from bottles to cans in 2023 in an effort to reduce its carbon footprint and be more economical.
MILWAUKEE, WI・1 DAY AGO
TMJ4 News

More than 700,000 people rely on food stamps across the state, which includes 230,000 according to the Hunger Task Force. They are about to see a huge slash in benefits.
MILWAUKEE, WI・3 HOURS AGO
TMJ4 News

The popular influencer who transformed a Whitefish Bay home back in September and sold it for a major profit has bought and sold another home.
WHITEFISH BAY, WI・1 DAY AGO
TMJ4 News

Amtrak Train Service to Green Bay: A 360-degree look at the proposal

Amtrak's vision is for trains that currently run from Chicago to Milwaukee, to keep going north - making stops in Fond du Lac, Oshkosh, and Appleton, before making a final stop in Green Bay.
GREEN BAY, WI・1 DAY AGO
TMJ4 News

The Kiddie Academy in Brookfield opened during the fall of 2020, perhaps one of the most difficult times to open a childcare center as the COVID-19 pandemic raged on.
BROOKFIELD, WI・23 HOURS AGO