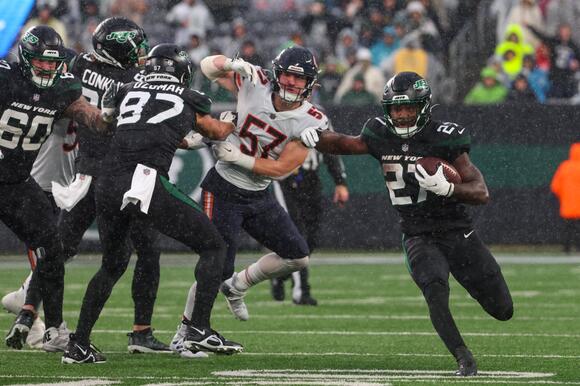 Injuries and lopsided loss mean Bears entered a part of their season when they simply want to get through healthy.

The time came rather abruptly in one game for the Bears to enter a new phase of their season.

Until Sunday, it has been to stay as competitive as possible, and they did a good job of it without managing to pull out wins at the end of games.

They need to climb back into the shell and keep all possible damage on the outside until the remaining five games are done.

Fox Sports in its power ranking this week suggested playing Madden simulation instead of actually playing the final five games to avoid injury to real players. Creative thinking, but not exactly functional.

The blowout loss to the Jets came not only with an embarrassing display of weakness on the part of the Bears, but also with numerous injuries that can lead to even more injuries for starters.

In this week's power rankings, a good description of what needs to be done now was made by Yahoo Sports' Frank Schwab.

"It's just time for them to be very safe with their personnel decisions the rest of this lost season," Schwab said.

That means avoiding risk with Justin Fields when it's not 100% clear his shoulder is healed, not playing other key personnel who might be nursing injuries but it also means not simply throwing young players on the field willy-nilly.

While fans might want to take a look at young players, the veterans who are playing aren't necessarily in favor of this and tight end  Cole Kmet described why.

"Just throwing somebody out there just to see how they're going to do, that's a scary thought for me and for other guys," tight end Cole Kmet said. "You want to be able to trust all the guys on the field to know they're doing their job because it is a nasty, violent sport and it shows up and it showed up (Sunday) for sure."

Translated: Young players on the field who don't know what they're doing can get somone hurt.

The Bears may not have a choice in many instances, with this long list of injuries starting to increase by the day.

"Yeah, I think with, based on injury and who we've got to slide in, next-man-up mentality, some guys will get the opportunity for sure," Eberflus said.

So if what Kmet and Eberflus is right, expect even more injuries to come.

Their power rankings this week reflect the new position for them of simply trying to get through the schedule. Their consensus positioning is 29.5 now.

Of the many big drops, this one came from the loftiest point because they had been No. 20 last week. Conor Orr tries to stay upbeat. "If nothing else, the Bears put a team on the field this year that will make their fans show up in 2023 curious and hopeful. That is more than I would have guessed at the beginning of the year," he wrote.

They dropped from 23rd to 30th based on Sunday's beating in the rain in New Jersey. The USA tag team of Robert Zeglinski and Christian D'Andrea suggested they simply Madden-simulate the rest of their season to avoid further injuries.

The Bears fell four spots and the theme for their rankings was a realistic expectation for the team, which beat reporter Courtney Cronin said was Justin Fields' development. She also pointed out "Fields has yet to attempt more than 28 passes or throw for more than 208 yards in a game this season."

There aren't many places they can fall lower than 30th so they stayed the same in this poll as Pete Prisco pointed out: "They have to hope (Fields is) back soon, but they also have to make sure he's healthy for next year."

The bottom didn't fall out, but they did drop six spots to 29th and Dan Hanzus remarked "When you take Justin Fields out of the mix, there's not much meat on the bone here." 23rd

They only dropped three spots but that's because they were already ranked pretty low. David Helman wrote about the loss of Darnell Mooney" "With Darnell Mooney now lost for the season, it doesn't look to get any prettier."

Unless Houston somehow wins, they have hit rock bottom in this poll and Austin Gayle pulled no punches: "The Bears are a mess even when Justin Fields is healthy. Unsurprisingly, they’re even worse without him."

In falling one spot , the Bears defense took a hit from Vinnie Iyer: "The Bears did their best to stay competitive without Justin Fields and with Trevor Siemian, but their shell of a defense cost them big-time again vs. run and pass against the Jets.

In dropping one spot , the Bears were commended for making the right decision to sit Fields but they were blasted for an "ugly day" of football after a surprising start with Trevor Siemian. There was nothing surprising about it. The real surprise would have been if Nathan Peterman was the one starting.

The New England Patriots are currently set up well with two young quarterbacks, Mac Jones and Bailey Zappe, who both have winning records as starting quarterbacks during their short tenure in the league.
1 DAY AGO
BearDigest

Is Tee Higgins to the Bears a Good Idea?

Speculation Tee Higgins could be traded by Cincinnati to the Bears built but is such a move really in Chicago's best interest?
CHICAGO, IL・49 MINUTES AGO
BearDigest

The early mock drafts held Will Anderson Jr. as a pick for the Bears at No. 1 but now there's a new No. 1 and choice for them.
CHICAGO, IL・8 HOURS AGO
BearDigest

Tom Brady's retirement decision is impactful on the Bears well beyond the fact Tampa Bay is on the 2023 schedule.
CHICAGO, IL・2 DAYS AGO
BearDigest