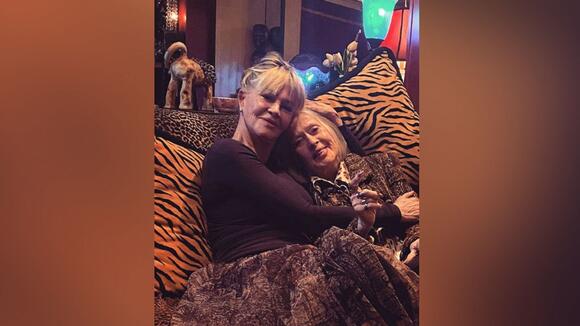 Thanksgiving may be over, but actress Melanie Griffith is thankful for her mom every day.

On Instagram Monday, the actress, 65, shared a photo of her and her mother Nathalie Kay "Tippi" Hedren, also an actress, embracing on a couch.

"Thankful that my Mom is still here with us," Griffith wrote in the caption.

Griffith, whose own daughter is actress Dakota Johnson , is Hedren's only daughter. She celebrates Hedren on and off social media every chance she gets, including on Hedren's birthdays.

For her 92nd birthday in January, Griffith shared a carousel of photos of Hedren and wished her a happy birthday in the caption.

MORE: Dakota Johnson opens up about her 'beautiful' struggles with depression

Hedren rose to fame for her role as Melanie Daniels in Alfred Hitchcock's 1963 film, "The Birds." Throughout her career, she has devoted her time to charity and worked with relief programs to help those affected by earthquakes, hurricanes, famine and war. She is also an animal rights activist, serving as the founder and president of the Roar Foundation, which supports the Shambala Preserve in Acton, California.

Phil Collins turned 72 on Monday and his daughter, Lily Collins, paid tribute to him with a sweet post in which she reflected on their similarities.
3 DAYS AGO
GMA

Oprah, Jennifer Lopez and Kim Kardashian snap photos together while out and about

Victoria Beckham called her 11-year-old daughter her "number one" muse as she shared a selfie of them dressed in her designs.
3 DAYS AGO
GMA

Naomi Campbell shared a rare glimpse of her daughter while out and about together in Abu Dhabi.
3 DAYS AGO
GMA

'Literally cut them up': Ciara creates stylish look out of cargo pants

Ciara recently showed off a stylish outfit she created from cargo pants.
4 DAYS AGO
GMA

Tarek El Moussa and Heather Rae Young announced the arrival of their baby boy via Instagram on Thursday, writing, "Our hearts are so happy."
15 HOURS AGO
GMA

Martha Stewart graced fans with a brand new zoomed-in selfie of her skin after having a "mostly dry January."
4 DAYS AGO
GMA

The show, which first premiered in September 2002, will air its final original episodes through its 2022-2023 season.
TEXAS STATE・2 DAYS AGO
GMA

Lisa Loring, the actress who portrayed the original Wednesday Addams in the '60s series "The Addams Family," has died.
NEW JERSEY STATE・4 DAYS AGO
GMA

"The Bachelorette" alum Clare Crawley and her fiancé Ryan Dawkins have tied the knot.
16 HOURS AGO
GMA

Selena Gomez shared several fresh-faced selfies, and her fans are loving it.
1 DAY AGO
GMA

Gwyneth Paltrow posted a series of outfits on Instagram, her daughter Apple Martin making a cameo in one of the photos.
2 DAYS AGO
GMA

Priscilla Presley is contesting the "authenticity and validity" of a "purported" amendment to late daughter Lisa Marie Presley's trust.
3 DAYS AGO
GMA

Tracee Ellis Ross spoke to "Good Morning America" about her new podcast "I Am America" and her love of storytelling.
3 DAYS AGO
GMA

Review: Natasha Lyonne has found the role of her career in 'Poker Face'

The Jonas Brothers were inducted into the Hollywood Walk of Fame this week with their wives by their sides.
CALIFORNIA STATE・4 DAYS AGO