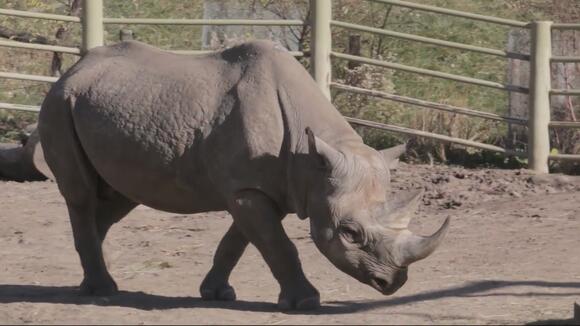 DES MOINES, Iowa (WHO) – One of the Blank Park Zoo’s longtime residents will be leaving Tuesday. Kiano the rhino who first came to the zoo in 2012 is leaving 10 years later after fathering two baby rhinos.

Eastern Black Rhinos are critically endangered. Kiano and the other rhinos at the Blank Park Zoo are all part of a captive breeding program that aims to keep the species from going extinct.

Kayla Freeman, the Large Mammal Supervisor at the Blank Park Zoo, said that Kiano has put in his work for the species, and now it’s time to make room for other rhinos.

“The breeding and having babies is the most important thing. We get those recommendations from the species survival plan based on their genetics,” Freeman said. “In the past they’ve looked at Ayanna and Kiano’s genetics and thought that they were a good pair so we had Kamara and Tumani. Now he’s moving on to Texas.”

Kiano leaving will free up space for the other rhinos at the zoo. Eventually, the zoo plans to get a new male rhino to continue the breeding program.

Monday is the last day for visitors to see Kiano before he departs Tuesday. To learn more about Kiano and the rest of the rhinos at the Blank Park Zoo, visit their website .

Crews search for person in Des Moines River; no one found