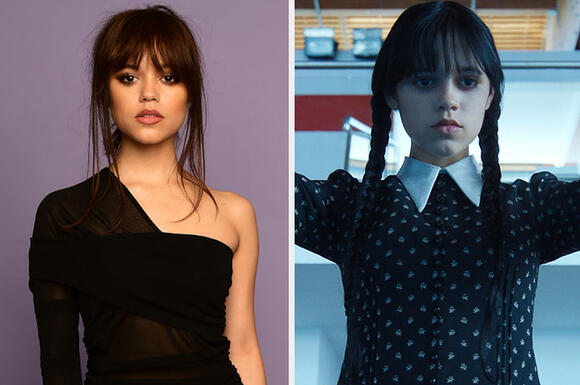 Fans can't get enough of how well Jenna Ortega transformed into titular character Wednesday Addams in the new Netflix series Wednesday , and now the actor is giving some insight into how she did it.

One thing that viewers might've noticed is that Wednesday doesn't blink, and that was 100% intentional. During a recent interview on Today , Jenna revealed how she was able to accomplish the eye-opening task.

Early on, while Jenna and director Tim Burton were developing Wednesday's characteristics and mannerisms, they decided having Wednesday not blink added to her eerie ways.

"She doesn't blink," Jenna told Today . "[Tim] likes it when I tilt my chin down and look through my eyebrows, kind of like a Kubrick stare, and then I relax all the muscles in my face."

As for the not-blinking portion of her role, Jenna admitted she got "pretty annoying" about it while filming. But even though they were working during a Romanian winter as wind hit her face, she figured out a way around it.

One trick she learned was to blink while her costars say their lines and then hold off when she's delivering her own lines.

She's gotten so good at it, fans are now purposely watching the series extra closely in an attempt to catch her blinking.

To learn more about Jenna, check out her full interview with Today .

It’s good news for comedian Hasan Minhaj, as Jeopardy! viewers appear to have found a new candidate for the “most annoying contestant ever.”. Delivery dispatcher Jake DeArruda is the contestant in question, as some fans have deemed him “unwatchable.” The Ludlow, Vermont native has been on a roll since knocking Troy Meyer off the winner’s podium last week and, as of Tuesday (January 31), has won three games in a row.
VERMONT STATE・1 DAY AGO
BuzzFeed

Olivia and Jason dated from 2011 to 2020 and share two children.
2 DAYS AGO
BuzzFeed

"It was a beautiful film that tackled so many aspects — identity, culture, race, and yes relationships."
3 DAYS AGO
BuzzFeed

31 Dating Profiles So Horribly Cringe-Worthy, I Can't Believe Someone Actually Posted Them

One guy's girlfriend requirements include being willing to take a lie detector test every six months...yikes.
11 HOURS AGO
BuzzFeed

"The Last Of Us" Episode 3 Features A Small Detail From Bill's Letter That Is So Good, But You Might've Missed It

The Last of Us Episode 3 delivered a heartbreaking and beautiful story about Bill and Frank that is made even better by the show's attention to detail and some hidden Easter eggs.
1 DAY AGO
BuzzFeed

"The way they went about it has me emotional. Beautiful job. I also love the fact that they didn’t sugarcoat Oscar’s reaction. Because it is natural."
3 HOURS AGO
BuzzFeed

Bill and Frank's story in The Last of Us made everyone cry, but it had a deep effect on Murray Bartlett's real-life partner.
6 HOURS AGO
BuzzFeed

Spoiler alert: the kids are still hanging out down the street doing the same old thing they did last week.
6 HOURS AGO
BuzzFeed

It's really gonna be a wild ride.
7 HOURS AGO
BuzzFeed

"I'm sure we all know why we've gathered here today."
7 HOURS AGO
BuzzFeed

"Every time a Marvel movie tries to do a female cast, it just gets torn apart."
3 DAYS AGO
BuzzFeed

I Thought Dolly Parton's Response To A Keto CBD Gummy Scam Was Fake, But Apparently This Is 100% Real

But seriously, how dare they.
6 HOURS AGO
BuzzFeed

“In the movies, we merged into one. By the end of it, I was playing myself."
2 DAYS AGO
BuzzFeed

15 Embarrassing Screenshots Of Siblings Exhibiting The Most Entitled Behavior

"Were you thinking of paying me?" "Lol nope."
2 DAYS AGO
BuzzFeed

We want the drama. ALL of it.
6 HOURS AGO
BuzzFeed

"There was a point not far into the book where my brain stopped reading the text and it all flowed into cinematic mode — because the story would translate so perfectly to film."
MINNESOTA STATE・6 HOURS AGO
BuzzFeed

David Harbour And Lily Allen's Bathroom Is Very Weird But Very Cool, Even Though I Believe A Carpeted Bathroom Should Be A Punishable Sin

From carpet to swan taps to embroidered venereal diseases: they got it all.
NEW YORK STATE・11 HOURS AGO
BuzzFeed

Dave Bautista Is Afraid He’s Too “Unattractive” To Star In A Rom-Com, And The Internet Is Out To Prove Him Wrong

"I don't know. It's just never come my way. I've never had an offer to do a rom-com. I still have high hopes. I'll just keep searching."
1 DAY AGO
BuzzFeed

15 Celebrity "Moesha" Cameos That Live In My Head Rent-Free

Nick Offerman Almost Said "No" To His Role In "The Last Of Us," But Thankfully, His Wife Megan Mullally Stepped In