By Michael McDermott
Inside The Diamondbacks
2022-11-29 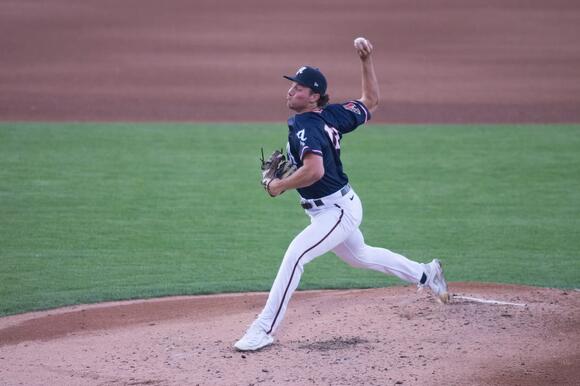 Pfaadt's excellent 2022 year in the upper minors resulted in Minor League Pitcher of the Year honors.

Pfaadt has three swing-and-miss offerings between a 4-seam fastball at the top of the zone, a slider that gets a lot of late sweep away from right-handed hitters, and a changeup with solid fade. The fastball velocity doesn't jump off the page, as he's 92-95 MPH, but it plays up due to a high spin rate around 2500 RPM and his ability to spot it on the edges of the strike zone. Both the slider and changeup are in the mid 80s, both serving as put-away pitches to right-handed and left-handed hitters respectively.

Even after a breakout 2021 that established him as a starting pitcher prospect, Pfaadt took his game up to the next level in 2022. Making 29 starts in two of the worst run environments in the minor leagues, Pfaadt pitched to a 3.83 ERA and struck out 218 hitters while only walking 33 in 167 innings. The 218 strikeouts is the highest total in the minor leagues in the past 21 seasons. For his excellent season, he was named the Diamondbacks Minor League Pitcher of the Year for the 2022 season .

Pfaadt has always been a good strike thrower in his career, but at times threw too many pitches in the zone in pitcher-friendly counts. He attributed much of his improvement in 2022 learning "when to evacuate the zone" and get hitters to chase when ahead 0-2 or 1-2. That resulted in his swinging strike rate to jump to 16.4% and 16.7% between Amarillo and Reno, leading to a strikeout rate above 30% at both levels. He was also excellent at avoiding free passes, with walk rates of 4.3% and 5.8%.

No matter what metrics you want to use, Pfaadt had an exceptional season and easily handled the toughest challenges the D-backs could give him in their minor league system. He's ready to take on the challenge of facing big league hitters, the only question is about finding an opportunity.

Pfaadt should be one of the few non-roster invitees that could get a legitimate opportunity to earn a rotation spot next spring. He should be a consensus Top 100 prospect, with Fangraphs and MLB Pipeline already putting him on their lists before the end of 2022. That's important because the D-backs could be rewarded if he finishes strong in next year's Rookie of the Year race. After Corbin Carroll, Pfaadt is likely their next best candidate to win the award.

He's already proven that he can handle a big league starter's workload, with 29 starts and 167 innings in 2022. It's not unreasonable to believe if he can make more than 30 starts that Pfaadt can deliver 180-200 innings a year. If he makes 33 starts and exceeds 180 innings with solid production, he would be a top contender for Rookie of the Year.

Pfaadt has the upside of a #1 starter in a best case scenario, but will likely settle into as a #2/3 starter in the D-backs rotation. He has the ideal body type to handle 180-200 innings a season and can command three different swing-and-miss pitches. The combination of above-average stuff, good command, and the ideal body type gives Pfaadt the best chance to stick in the rotation long term barring any significant arm injuries.