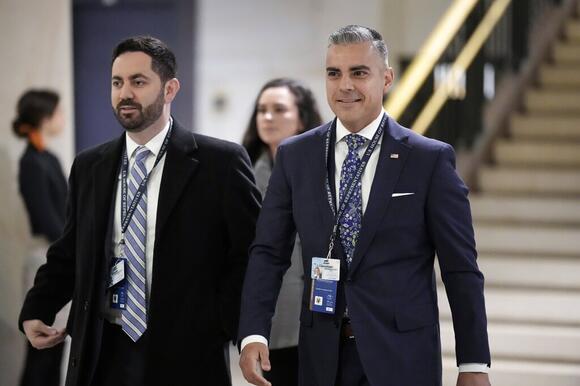 A rural GOP county in Arizona could cost its own party a House seat in an already narrow majority if it does not certify its election results .

Republican Juan Ciscomani is the projected winner for Arizona's 6th Congressional District. Despite being regarded as a rising star in his party, however, he could lose his seat to Democrat Kirsten Engel because the GOP-controlled supervisors of Cochise County voted on Monday to delay the certification of the results from the midterm elections despite the Nov. 28 deadline and without evidence of problems with the local counts.

The county's decision risks excluding close to 47,000 Arizonans' votes and could eliminate the 38,706 votes cast for Ciscomani, per the county's report logs.

Arizona Secretary of State and Gov.-elect Katie Hobbs filed a lawsuit in the Cochise County Superior Court against the county on Monday, asking the court to compel Cochise County to certify its results.

Hobbs argued in the lawsuit that the county is not only violating state law but also will "potentially disenfranchise the voters of Cochise County."

If the court does not intervene, "the Secretary will have no choice but to complete the statewide canvass by Dec. 8 without Cochise County's votes included."

"Thus, the Board's inaction not only violates the plain language of the statute, but undermines a basic tenet of free and fair elections in this state: ensuring that every Arizonan's voice is heard," the lawsuit said.

Cochise County Supervisor Ann English, the lone Democrat on the board, said, "There is no reason for us to delay," per NPR. However, she was outvoted by GOP Supervisors Tom Crosby and Peggy Judd.

The Associated Press called the race with Ciscomani receiving 50.7% of the votes, a narrow win over Engel with 49.3%. However, statewide results without Cochise County's numbers would reportedly flip the seat in favor of Engel . A state schools chief seat would also flip for the Democrats.

Arizona has been the target of election fraud claims since 2020, particularly in Maricopa County, the state's largest county. Voter tabulation machine malfunctions and other problems plagued Maricopa County during the 2022 midterm elections, too, causing Lake and other Republicans to attack the county for negligence and voter fraud.

In a lawsuit filed last week, Lake asked the Arizona Superior Court to require officials to produce records on how they conducted the midterm elections. Maricopa County officials, led by Republican Bill Gates, voted unanimously to approve the county's results on Monday.

The level of ignorance in Cochise county is astounding. If those candidates lose because the county will not certify, they should sue the county.

so if they don't just accept the "irregularities ", that happened to affect republican areas, they will be ignored, and sued, and alot more republican votes won't be counted??? sounds about the same as 2020!!!

(The Center Square)- As six states wait for California to join its Colorado River Basin water use agreement, Arizona Sen. Kyrsten Sinema called on the state to be willing to seal the deal.
CALIFORNIA STATE・3 DAYS AGO
WashingtonExaminer

Florida lawmakers have introduced legislation that would lower the state's requirement for a convicted criminal to be sentenced to the death penalty.
FLORIDA STATE・2 DAYS AGO
WashingtonExaminer

Gov. Jim Justice (R-WV) said he will decide by the end of February whether or not he will run for Senate in 2024.
WEST VIRGINIA STATE・2 DAYS AGO
WashingtonExaminer

As Rep. Elise Stefanik (R-NY) is set to serve on the House Select Subcommittee on the Weaponization of the Federal Government, her role on the panel could push her to a higher office for 2024.
FLORIDA STATE・2 DAYS AGO
WashingtonExaminer

The Satanic Temple announced plans to launch a virtual abortion clinic that will provide abortion-inducing drugs by mail to women in New Mexico who are no more than 11 weeks pregnant and at least 17 years old.
NEW MEXICO STATE・3 DAYS AGO
WashingtonExaminer

An illegal immigrant and Iranian national listed on the FBI's terror watchlist was detained near the southern border by Texas authorities last week, according to a Wednesday report.
VAL VERDE COUNTY, TX・3 DAYS AGO
WashingtonExaminer

Stimulus update: 14 days to claim checks worth up to $800 in South Carolina

There are two weeks left for South Carolina residents to file their 2021 taxes and receive a rebate of up to $800.
SOUTH CAROLINA STATE・3 DAYS AGO
WashingtonExaminer

The Interior Department finalized its environmental review for ConocoPhillips' Willow project Wednesday, laying the groundwork for approval next month of what would be the nation's largest oil development on public lands.
ALASKA STATE・3 DAYS AGO
WashingtonExaminer