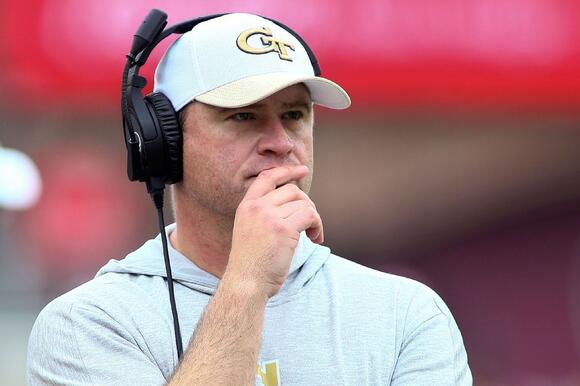 Georgia Tech went 4-4 with Key as the interim coach as he took over a program that started the season 1-3 under Geoff Collins, who went 10-28 with the Yellow Jackets before being fired Sept. 26 .

Key led the Yellow Jackets to wins over Pitt , Duke , Virginia Tech and North Carolina as they finished 5-7, showing dramatic upticks in energy, performance and fundamentals.

Key is a former team captain and All-ACC offensive lineman at Tech, starting 44 games from 1997 to 2000. He returned to his alma mater as an assistant coach in 2019 and has served as the assistant head coach, run game coordinator and offensive line coach before becoming the interim head coach.

"I am so proud and grateful to be the head coach at my alma mater, Georgia Tech," Key said in a statement. "Like I've said many times over the past two months, I love this team, and I couldn't be more excited to be their head coach. We will work unbelievably hard to make our fans, alumni and former players very proud of this program."

Key is the first hire for new athletic director J Batt, who came from Alabama to help revive Tech's athletic department, which has struggled financially and athletically in recent seasons.

"Since I arrived on campus earlier this fall, I have observed first-hand Coach Key's leadership, passion, energy and genuine care for our student-athletes, our football program and the Institute, as well as how his players and staff responded to his leadership and the genuine care that they have for him," Batt said in a statement. "There was strong interest from across the country to be the next head coach at Georgia Tech, and we conducted an exhaustive national search. At the beginning and end of the search, it was clear that the best choice for Georgia Tech is Brent Key.

Tech struggled to lure a big outside name because of the school's reluctance to guarantee large portions of the contract, with the amount of guaranteed money a nonstarter for some candidates.

The school owes Collins more than $11 million, and financial concerns are significant.

A Zach Edey-led Purdue remains dominant, while the rest of the Top 16 shuffles around and mid-majors take over the waiting room.
TENNESSEE STATE・2 DAYS AGO
ESPN

Three consecutive losses plunged Ohio State eight spots. But it was a very good week for the likes of UConn, Indiana, Iowa State and Iowa.
AMES, IA・2 DAYS AGO
ESPN

It’s the sound of hearts breaking across Philadelphia and the state of Pennsylvania… and let’s be honest, everywhere else in the country, too. Eagles quarterback Jalen Hurts made a very rare public appearance with his girlfriend Bryonna “Bry” Burrows after the NFC Championship game this past Sunday, which is a surprise to many fans, as he is extremely private about his life outside of football.
PHILADELPHIA, PA・1 DAY AGO
OnlyHomers

The college basketball world is mourning the loss of a legend this week following the death of a longtime coach that led one small school to historic highs in the NCAA Tournament.
HARRISONBURG, VA・16 HOURS AGO
ESPN

Pro Football Hall of Fame executive Bobby Beathard has died at the age of 86.
FRANKLIN, TN・12 HOURS AGO
ESPN

Kris Richard, whom the New Orleans Saints promoted from defensive backs coach to co-defensive coordinator last season, will not return to the team, a source confirmed to ESPN.
ATLANTA, LA・11 HOURS AGO
ESPN

Colin Castleton scores 20 as Gators take down No. 2 Vols

Colin Castleton scored a game-high 20 points, including 16 in the second half, and Florida upended the second-ranked Volunteers 67-54 on Wednesday night.
GAINESVILLE, FL・6 HOURS AGO
ESPN

College basketball teams to buy or fade ahead of March Madness

With the NCAA tournament field almost a month away, Dalen Cuff looks at some of the top teams around the country and whether you should buy the hype or fade them.
ALABAMA STATE・1 DAY AGO
ESPN

Ohio State offensive coordinator Brian Hartline will have an opportunity to call plays this spring, but coach Ryan Day told reporters on Wednesday he won't decide if he's going to relinquish the play-calling duties this fall for another "few months."
COLUMBUS, OH・17 HOURS AGO
ESPN

Former Tennessee star quarterback Hendon Hooker is on track to be healthy in time for his opening NFL training camp this summer, he told ESPN at the Senior Bowl on Tuesday afternoon, saying people will soon see "a better version of Hendon Hooker."
TENNESSEE STATE・1 DAY AGO
ESPN

Dolphins quarterback Tua Tagovailoa has cleared the concussion protocol more than one month after entering it.
MIAMI, FL・17 HOURS AGO
ESPN

Deion "Coach Prime" Sanders is trying to bring something back to the University of Colorado: hope in its football program. With two five-star recruits and a No. 23 overall recruiting class ranking, he might be on the right track.
BOULDER, CO・7 HOURS AGO
ESPN

Previously unbeaten Ohio State lost three games, sending it tumbling from No. 2 to No. 10 in the AP Top 25 women's hoops poll, while the South Carolina Gamecocks remained No. 1 for the 32nd straight week.
COLUMBUS, OH・2 DAYS AGO