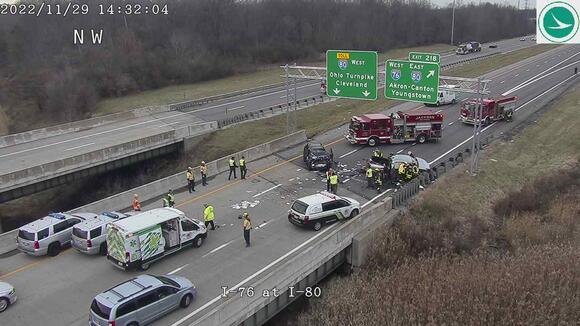 The Ohio State Highway Patrol, firefighters and an ambulance were called to the scene on Interstate 76 westbound near Interstate 80 just after 2 p.m. The crash blocked the roadway for almost two hours, but the area has since been cleared and traffic is moving again.

Finding Amy Hambrick: Investigators find some answers in the morgue

According to Highway Patrol, a Toyota Tacoma was traveling eastbound before it went off the left side of the road and through a grass median, hitting a concrete barrier and spinning out into the westbound lanes. A Toyota Rav4 was traveling westbound when it hit the Tacoma.

The driver of the Rav4 was 37-year-old Laura Frick, of Milford, Delaware. She was taken to the hospital with minor injuries.

At this time, it is unknown what caused the crash.

Gerry Ricciutti contributed to this report.

2 cars heading in opposite directions both from Delaware? What are the chances?

guess the news anchor should be careful of her words. "the driver of a TRUCK" If you just listen to her it sounds like it was A TRUCK, not a toyota pickup. Gives TRUCK Drivers another black mark, like we need that crap. So sad for ALL involved and the loss of lives. Bad ANYTIME but much worse near Holidays. Prayers for Families and Friends