Mike McDaniel Jokes Ahead of Matchup vs. Kyle Shanahan 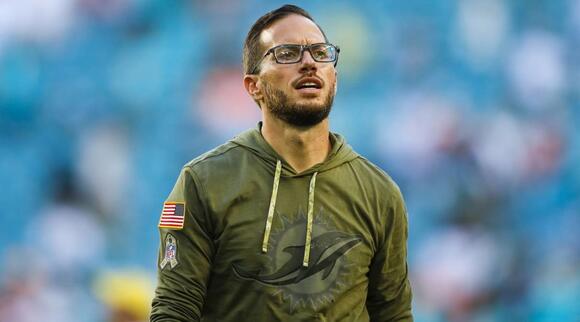 The two coaches will face off for the first time on Sunday.

When the Dolphins and 49ers play on Sunday, it will be the first time that Mike McDaniel and Kyle Shanahan face off as head coaches. McDaniel, who is in his first season as the Dolphins’ head coach, spent 16 seasons on the same coaching staff as Shanahan.

While McDaniel downplayed that there will be extra motivation between the two to win this week, he joked that he will be keeping the physicality to the players.

“I will not be undertaking any Oklahoma drills as well this week on the field with him,” he said, via Tom Dierberger of NBC Sports Bay Area .

In all seriousness, McDaniel credits Shanahan for a lot of his success in the NFL. The two first worked together with the Texans in 2006, then McDaniel followed Shanahan to Washington, Cleveland, Atlanta and San Francisco before getting his own head coach position.

“I owe a lot to him in general,” he said. “I will be forever grateful, and I think he's always been one of the best, if not the best, offensive coaches and head coaches that I've ever had experience being around.”

The matchup is one of the best of the weekend, as both teams currently sit in first place in their respective divisions. The winner will take another step toward winning its division, while the loser may fall to second place before the end of the weekend.

For more Miami Dolphins coverage, go to All Dolphins

The Buffalo Bills are coming off a disappointing end to their season, losing 27-10 at home against the Cincinnati Bengals in the AFC Divisional round in the playoffs. Entering the offseason, the Buffalo Bills have started looking toward the future and made the tough decision to fire one of their long-tenured coaches.
15 HOURS AGO
hotnewhiphop.com

One AFC team is reportedly very interested. Aaron Rodgers and the Green Bay Packers had a difficult season. Overall, they failed to make the playoffs and at times, it felt like Rodgers was done with the Packers organization. After all, he has threatened to leave the team three offseasons in a row.
GREEN BAY, WI・2 DAYS AGO
Sports Illustrated

He Was the 31st Pick in the NBA Draft and a Millionaire. Two Years Later, He Walked.

Tyrell Terry had a spot on a promising Dallas team at 20. But life in the league was taking a toll on his mental health. Now he’s given up pro basketball and has no interest in ever going back.
DALLAS, TX・2 DAYS AGO
Sports Illustrated

The Liberty University alum also played for the Chargers.
15 HOURS AGO
Sports Illustrated

One assistant coach with no head coaching experience reportedly impressed during his interview.
CHARLOTTE, NC・1 DAY AGO
Sports Illustrated

Art Rooney II discussed why he chose to keep the franchise’s play-caller heading into the ’23 campaign.
PITTSBURGH, PA・9 HOURS AGO
Sports Illustrated

It was his first Instagram post since their 27–20 divisional-round loss to the Chiefs.
JACKSONVILLE, FL・12 HOURS AGO
Sportsnaut

What Super Bowl Reservation Prices Say About the Conference Championships

A look into the paths for the Eagles, 49ers, Bengals and Chiefs to the playoffs through postseason ticket prices.
PHILADELPHIA, PA・14 HOURS AGO
Sports Illustrated

The 15-year agreement will create a hub for NIL activity inside Bryant Denny Stadium.
TUSCALOOSA, AL・2 DAYS AGO
Sports Illustrated

The Lakers are expected to make some big moves ahead of the NBA trade deadline.
LOS ANGELES, CA・1 DAY AGO
Sports Illustrated

As they’ve cycled through quarterbacks, the 49ers’ top-ranked defense has remained a constant. It has everything to do with the man in charge of it and his younger self.
HOUSTON, TX・15 HOURS AGO
Sports Illustrated

Sean Payton Shuts Down Report About How His Broncos Interview Went

The Super Bowl XLIV champion denied that his interaction with Denver went awry.
DENVER, CO・4 HOURS AGO
FastBreak on FanNation

The quarterback injured his foot eight weeks ago.
1 DAY AGO
Sports Illustrated

Pat Riley Says Kareem Abdul-Jabbar Will ‘Always Be’ His GOAT

The Heat president said his choice is based on the ‘longevity’ of their careers.
1 DAY AGO