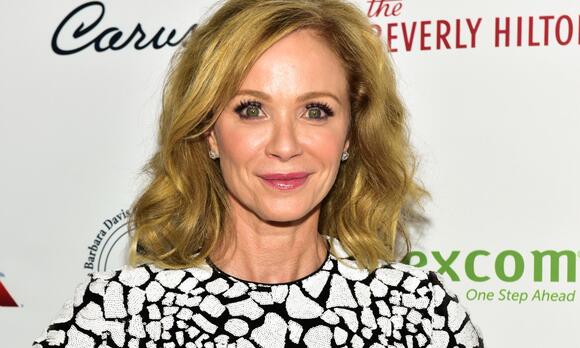 Thanksgiving is typically a warm, cheerful time spent among friends and family. For NCIS star Lauren Holly, however, this year’s festivities were bittersweet at best, as two of her closest family members were missing from the table.

On Thanksgiving Day, Lauren Holly revealed that she recently lost both her father, Grant Holly, and her brother, Nick Holly. To make matters worse, the men died within two weeks of each other.

“I’ve lost my father and my brother in the last two weeks,” NCIS ‘ Lauren Holly wrote alongside a series of photos of her loved ones. “I just want to say out loud how much I loved them. How much I will miss them. Grant. Nick. Dad. Little Brother. Soar. Hold A. Et all.”

Friends, family, and fans flooded the comments of the post with messages of condolence and grief. “So sad. They will both be missed. Sending you so much love,” wrote Princess Bride star Cary Elwes.

A tenured professor of English at Hobart and William Smith Colleges, Grant Holly passed away on November 8. A mere thirteen days later, Nick Holly, a manager, writer, and producer who helped create Sons & Daughters died on November 21 at the age of 51.

Colleagues and students alike mourned the unspeakable loss of Grant Holly, who continued to inspire classes until his dying day. “Professor Holly was the longest serving faculty member at HWS, a successful screenwriter, a scholar, and a mentor to generations of students who benefited tremendously from his knowledge and commitment,” HWS President Mark Gearan said in a statement .

“He was a valued friend to his colleagues, providing advice, counsel, and support. He died doing what he loved, showing students the joy and wonder of film.”

Following Nick Holly’s tragic passing, the Holly family released a statement describing how he “loved the ocean, the wilderness, and traveling the world, climbing mountains from Baldy to Kilimanjaro.”

“A larger-than-life character and hilarious storyteller, Holly regaled his many friends with epic tales from his myriad adventures. From the plains of the Serengeti to the produce aisle of Whole Foods, Holly was always the hero,” the statement continued. “He will be remembered by all who knew and loved him as a great thinker, philosopher, and lover of Scotch.”

Sorry for your loss! I can sympathize. I just lost my grandmother and mother in law within 2 days of each other this month.

lost a stepfather, two uncles and my mom within 5 five months. my mom and one uncle on the same day.

Causes of deaths, please. Why is it always such a secret these days what someone dies from?

Cindy Williams played the cheerful Shirley Feeney for eight seasons on Laverne & Shirley opposite Penny Marshall. Williams, who died on Jan. 25 at 75 years old, is being remembered by fans all over the world. She portrayed the Shotz Brewery worker in a hilarious way. The antics of Shirley and her friend, Laverne DeFazio, played by Marshall, kept people tuning in week in and week out.
2 DAYS AGO
Outsider.com

NFL broadcaster Tony Romo made a strange and head-scratching mistake by almost saying a certain word during the Chiefs-Bengals game. The verbal miscue caught the attention of plenty of fans around the league, and eventually the attention of Shannon Sharpe who weighed in on the debate in a humorous way.
CINCINNATI, OH・2 DAYS AGO
Distractify

“King of Pop” Michael Jackson’s family has been all over the news lately. The late pop star’s ex-wife Lisa Marie Presley passed away on Jan. 12. His daughter, Paris Jackson, attended the Los Angeles premiere of the documentary Pamela, a love story on Monday, Jan. 30. And that same day, Michael’s son Prince Jackson congratulated cousin Jaafar Jackson on his role as the “Thriller” singer in the upcoming biopic Michael. But what about Michael’s other son? Where is Blanket Jackson now?
LOS ANGELES, CA・1 DAY AGO
Outsider.com

Four men from Pennsylvania are facing charges after police allege that earlier this month, they sprayed a woman with urine from a female deer. The odd incident occurred in the parking lot of a Walmart near Gettysburg, Pennsylvania, earlier this month. According to reports, 18-year-old Brian James, 18-year-old Colby Fitzgerald,...
GETTYSBURG, PA・2 DAYS AGO
HollywoodLife

Leah Remini wasn’t at Jennifer Lopez‘s wedding to Ben Affleck last summer, which was shocking since Leah, 52, and J.Lo, 53, have been close friends for a very long time. But a recent wedding that Leah did make it to was J.Lo’s ex-husband, Marc Anthony, 54, and Nadia Ferreira‘s lavish nuptials in Miami on January 28. Leah, who has known Marc for a long, long time as well, showed off her glamorous look for the “I Need To Know” hitmaker’s special day on Instagram.
MIAMI, FL・2 DAYS AGO
Outsider.com

Professional skier Kyle Smaine, winner of the 2015 Freestyle Ski and Snowboarding World Championships, died in a horrific ski accident Sunday, his family confirmed. The skier was caught in a backcountry avalanche triggered near a Japanese ski resort. According to reports, five skiers found themselves trapped in an avalanche on...
2 DAYS AGO
Outsider.com

It’s been nearly 20 years since Keanu Reeves brought us the now cult-classic film Constantine. When the 2005 film hit the silver screen, fans of the comic book Hellblazer for which Constantine was based flocked to the theaters. However, the Keanu Reeves-led action movie didn’t make huge waves throughout the entertainment industry during its initial release.
2 DAYS AGO
Outsider.com

It’s Monday. We’re still coming down from that fantastic Bengals-Chiefs finish. And finally, the ears stopped ringing from all that Tony Romo shouting. The pitch of Romo’s voice kept growing higher throughout the game. And NFL fans viewing at home began noticing that Tony Romo also was speaking nonsense.
KANSAS CITY, MO・2 DAYS AGO
Outsider.com

After 40,000 gallons of sewage and water overflowed into a church parking lot in Portland, Oregon, officials had their hands full. According to local reports, the stomach-churning event occurred on Monday, Jan. 23rd, near the city’s intersection of Southwest Jefferson and 18th Avenue. Later, the city officials released a...
PORTLAND, OR・2 DAYS AGO
msn.com

Slide 1 of 22: Savannah Chrisley has spoken on her podcast about her parents, Todd and Julie Chrisley, and their recent incarceration on January 17th. She said: "Last week was an extremely difficult week for my family as a whole," as her parents have now spent almost two weeks in prison.
1 DAY AGO
Outsider.com

One woman was taken for the ride of her life after a ziplining excursion turned into bungee swinging. However, everyone seemed to be in on the joke except her. In the now-viral video, users watch as the woman prepares herself for ziplining. But, unbeknownst to her, her friends have a hilarious, albeit cruel, plan for her instead. Check out the video below.
2 DAYS AGO
Outsider.com

Recently, Yellowstone‘s Teeter actress Jen Landon made a life-changing decision about her living situation. And, looking back, she credits the decision to her Yellowstone costar Ryan Bingham. Speaking with Truck Camper Magazine, Jen Landon said that years of “itchy feet” led her to purchase a Capri Camper. The unit...
TEXAS STATE・15 HOURS AGO
Outsider.com

Business owner Lori Jones is used to having customers from all walks of life; however, when a family of deer decided to stop in her shop, it gave her pause. According to reports, Jones works selling gifts and supplies at the Horsetooth Inn and RV Park, a scenic mountain town perched at the foot of the Rockies in Fort Collins, Colorado.
FORT COLLINS, CO・2 DAYS AGO
Outsider.com

After Surviving Brutal Grizzly Bear Attack, Wrestler is Returning to the Ring

It’s been three months since Northwest College wrestler Brady Lowry survived a grizzly bear attack thanks to the bravery of his teammate and friend, Kendell Cummings. They, alongside two other wrestling mates, were set upon by a grizzly while hiking outside Powell, Wyoming this past October 15. The bruin attacked Brady first, but Kendell immediately charged the bear to save his friend. Both young men would require significant medical attention and recovery, and through it all they’ve had one thought on their minds. And no, it’s not grizzly bears. It’s getting back out on the mat.
POWELL, WY・1 DAY AGO
Outsider.com

This unidentified NFC coach apparently was trying to be funny with a comment about Patrick Mahomes. Still, you don’t often see the word “flopped” adjacent to the name of one of the most dynamic quarterbacks in the NFL. Let’s go back to the final seconds of the...
CINCINNATI, OH・1 DAY AGO
Popculture

That '70s Show lives on with That '90s Show, which picks up almost 20 years after the original show ended. Unfortunately, in that time span, a beloved character died off-screen. As noted from a couple of lines of dialog from Kitty Forman (Debra Jo Rupp), her mom, Bea Sigurdson, died between the shows' two time periods. Bea was played by the late TV icon Betty White, who died on Dec. 31, 2021, in four memorable episodes of the original show.
3 DAYS AGO
Outsider.com

It’s very rare that Yellowstone fans get to see Cole Hauser‘s Rip Wheeler anywhere but on the Dutton Ranch. However, with the show on hiatus until summer 2023, the 47-year-old actor ditched his character’s leather-fringed chaps and cowboy hat completely, instead taking a fun family trip to Disney, and making a special stop in Animal Kingdom’s Pandora. See the Yellowstone star’s photos below.
MONTANA STATE・2 DAYS AGO
Outsider.com

A judge has found a Colorado snowboarder guilty after they left the scene of a collision that killed a skier. The hit-and-run crash occurred at Colorado’s Eldora Mountain. According to reports from The Daily Camera, the tragedy occurred on November 30, 2021. Now, over two years later, a judge...
COLORADO STATE・2 DAYS AGO
Outsider.com

Watch This Cliff Completely Bottom out and Collapse

Thanks to wild footage, we can see the moment a cliff collapsed at a San Diego beach. According to reports, earlier this month, the collapse occurred at Black’s Beach, north of La Jolla Shores,. https://www.youtube.com/watch?v=M-X2-FN9pb0. Video can’t be loaded because JavaScript is disabled: Cliff collapses above San Diego County...
SAN DIEGO COUNTY, CA・2 DAYS AGO