Will Smith says he ‘lost it’ when he slapped Chris Rock 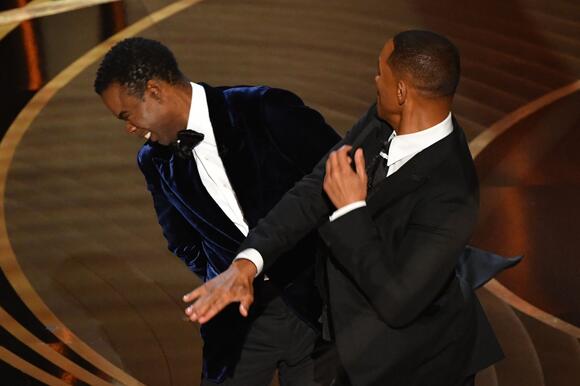 The Academy Award-winning actor discussed it in-depth with Trevor Noah on “The Daily Show” on Monday night.

Smith said it was “a horrific night” when he stormed the stage and slapped comedian Chris Rock after he made a comment about Smith’s wife, Jada Pinkett Smith. He also said there were “nuances and complexities” tied to the entire incident.

He revealed that basically, he “just lost it.”

“You just never know what somebody is going through,” he explained. “I was going through something that night. Not that that justifies my behavior at all.”

“That was a rage that had been bottled for a really long time,” he continued.

“We just gotta be nice to each other, man,” he reasoned with the lesson he learned. “It’s hard. I guess the thing that was most painful for me is I took my heart and made it hard for other people. I understood the idea when they say hurt people hurt people.”

The “Gettin’ Jiggy Wit It” rapper then discussed how his actions were an accumulation of “a lot of things.” He said the incident took him back to that “little boy that watched his father beat up his mother, all of that bubbled up at that moment. That’s not who I want to be.”

In his memoir “Will,” he referred to himself as a “coward” because he felt he didn’t protect his mother from his abusive father. He also expressed that he has “failed every woman” he has interacted with, which includes his grandmother and daughter, Willow.

The “Independence Day” star then told Noah a story about his nephew who stayed up to see his “Uncle Will” on the big night.

“We are sitting in the kitchen, he’s on my lap holding the Oscar, [and he asked] ‘Why did you hit that man, Uncle Will?’”

“Why you trying to Oprah me?” Smith said to lighten the tale. “It was a mess. I don’t want to go too far into it to give people more to misunderstand.”

The “Fresh Prince of Bel-Air” star sat down with Noah to promote his new movie “Emancipation,” which debuts in select theaters on Dec. 1.

He says he hopes his actions will not taint the success of the movie.

Since the incident, the Academy of Motion Picture Arts and Sciences has banned Smith from attending the Oscars for the next 10 years. This summer, the actor issued a public apology to Rock .

Meanwhile, Rock has dropped jokes here and there about the infamous slap. Many are expecting him to address it fully during his live Netflix special coming in 2023.

Videos showing the violent arrest of 29-year-old Tyre Nichols, a Memphis man who died 3 days after he was beaten by police in a traffic stop Jan. 7, has been released by Memphis officials.
MEMPHIS, TN・16 HOURS AGO
DC News Now

No whisky in bottles? Fireball sued for $5M, accused of misleading customers

WASHINGTON (DC News Now) — The Metropolitan Police Department said it fully activated all sworn members in preparation for protests that could come after the release of police footage related to the killing of Tyre Nichols in Tennessee. Nichols’ death came on Jan. 10, three days after officers said they stopped him for reckless driving. […]
MEMPHIS, TN・1 DAY AGO
Decider.com

The View can get heated and loud at the Hot Topics table, but an especially unusual noise interrupted yesterday’s broadcast, much to the surprise of viewers and the co-hosts themselves. During a political debate on the Wednesday (Jan. 25) show, Whoopi Goldberg and her View co-stars were interrupted by what can only be described as a fart sound. The flatulent interruption came at a rather inappropriate time as the panel discussed the recent discovery of classified documents in the home of former vice president Mike Pence. While they raised concerns about nuclear secrets floating around outside of the White House (as is rumored...
2 DAYS AGO
The US Sun

WEEKS before his tragic death, TikTok star Randy Gonzalez shared his last post with his son, Brice. The father-son duo with more than 15million followers on the platform shared a short five-second clip back in December. Brice could be seen comically yelling at Gonzalez, lip-synching along to a popular sound...
CALIFORNIA STATE・2 DAYS AGO
RadarOnline

Ryan Reynolds and Jake Gyllenhaal used to be besties but sources revealed the two barely speak, RadarOnline.com has learned. "It's a scratcher for their mutual friends," an insider revealed about the bizarre fallout. The pair met on the 2017 sci-fi thriller Life and immediately hit it off. "It's rare in our industry to meet someone, a contemporary and there's no competition," Ryan once gushed about his friendship with Jake. "There are just some friends you meet at a certain time in your life."But that may have been part of the problem."Ryan was something of a mentor to Jake back then,"...
FLORIDA STATE・1 DAY AGO
NBC News

Rodney King's daughter on Tyre Nichols: 'People wonder where the anger comes from, this is where'

Rodney King's daughter weighed in on the fatal beating of Tyre Nichols earlier this month and the triggering parallels it draws to the brutality her father suffered at the hands of police officers more than 30 years ago. "People wonder where the anger comes from, this is where," Lora Dene...
MEMPHIS, TN・18 HOURS AGO
DC News Now

MEMPHIS, Tenn. (AP) — Five fired Memphis police officers were charged Thursday with second-degree murder and other crimes in the killing of Tyre Nichols, a Black motorist who died three days after a confrontation with the officers during a traffic stop. A grand jury handed up indictments against Tadarrius Bean, Demetrius Haley, Desmond Mills, Jr., […]
MEMPHIS, TN・1 DAY AGO
DC News Now

WASHINGTON (DC News Now) — Grocery shopping will soon get tougher for millions of families across the country, as emergency food benefits are set to expire. That includes here in the DMV. According to the USDA, “the temporary boost to SNAP benefits put in place during the COVID-19 pandemic, known as emergency allotments, will end […]
VIRGINIA STATE・1 DAY AGO
DC News Now

Denisha Montgomery was found dead in her barracks last August. Officials ruled her death a suicide, but her family is demanding more information.
2 DAYS AGO
HollywoodLife

Corey Gamble, 42, is getting attention after being seen out with LA Rams coach Sean McVay and his wife, Veronika Khomyn. The reality star, who is known for dating Kris Jenner, had his arm around the latter at one point as they both appeared to say goodbye outside a club in West Hollywood, CA. He wore a blue and white jacket over a light black top, black and white pants, and matching sneakers, and she wore a black cropped top with quarter sleeves and black leather pants with heeled boots.
WEST HOLLYWOOD, CA・22 MINUTES AGO
DC News Now

MONTGOMERY COUNTY, Md. (DC News Now) — A grocery store customer who was assaulted during an encounter with a group of people in Gaithersburg said one person in the group made anti-Jewish comments towards him before hitting him and causing him to pass out. The Montgomery County Department of Police said they arrested 19-year-old Eugene […]
GAITHERSBURG, MD・20 HOURS AGO
DC News Now

“My name is Lilo. Please love me,” read the note found attached to the dog's collar.
CHATTANOOGA, TN・2 DAYS AGO
DC News Now

The expansion expels asylum-seekers from Cuba, Nicaragua, and Haiti back into Mexico and makes them ineligible for re-entry into the U.S.
WASHINGTON STATE・1 DAY AGO
DC News Now

Republicans introduced an immigration bill that would allow border authorities to stop all undocumented migrants from entering the country.
TEXAS STATE・18 HOURS AGO
Audacy

Jay Leno had a rough ending to 2022 when he suffered severe burns while working in his garage and his start to 2023 has been just as rough as he says he had a serious motorcycle accident in early January.
26 MINUTES AGO
DC News Now

17-year-old boy charged, accused of grabbing woman’s back side on Arlington trail

ARLINGTON COUNTY, Va. (DC News Now) — Police said a boy is facing a charge of Assault and Battery after he grabbed a woman’s buttocks as she was running along the Arlington Boulevard trail. The Arlington County Police Department said the incident took place on Nov. 29, 2022 around 3:05 p.m. The woman, who was […]
ARLINGTON COUNTY, VA・2 DAYS AGO
DC News Now

Video of the traffic stop that preceded Nichols’ death will be publicly released after 6 p.m. (CT). MEMPHIS, Tenn. — The attorneys and family of Tyre Nichols asked for justice for their son, and peace in their city, at a press conference in Memphis on Friday. Speakers included family members, attorneys Ben Crump and Antonio […]
MEMPHIS, TN・23 HOURS AGO
DC News Now

Goldman Sachs is predicting dark days in 2023 for some of the pandemic's red-hot U.S. housing markets.
SAN DIEGO, CA・1 DAY AGO