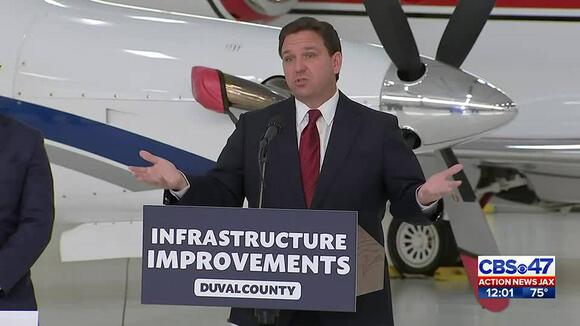 JACKSONVILLE, Fla. — Florida Gov. Ron DeSantis announced Tuesday $5.5 million will be awarded to the city of Jacksonville to construct a new railway system at Cecil Airport.

DeSantis said the project will bring new jobs and more money to the community. The funds come from the Governor’s Job Growth Grant Fund.

Just over a year ago, the airfield was awarded $13 million to construct nearly two miles of new roadways at Cecil Field.

The new rail line will stretch three miles and according to DeSantis, the infrastructure improvement will incentivize new companies to set up shop in Cecil.

“In fact, I know they’ve already been talking both at the local level and state with some companies that are eyeing this and this would be enough for them to want to come. So, stay tuned, I think you’re going to see some good announcements in the not-too-distant future,” DeSantis said.

Coming up tonight on Action News Jax, we’ll tell you how the Governor responded when we asked how his new elections crime unit performed in the 2022 election.

What he didn’t said is where this money come from , President Biden's Bipartisan Infrastructure Law and No Republican Vote for it.. but all of them make campaign like they provide that Money 😡😤

Two Missouri children were found inside a supermarket in Florida nearly a year after they were abducted, according to law enforcement officials. Brooke Gilley and Adrian Gilley were found on Wednesday at a Florida Winn-Dixie with their non-custodial mother, Kristi Nicole Gilley, the High Springs Police Department said on Thursday. Gilley, 36, was arrested for kidnapping on a warrant out of Clay County, Missouri, according to police. She was discovered with the children after police checked the tags on her vehicle and found she was a fugitive. High Springs Police Department did not immediately respond to ABC News’ request for comment.
HIGH SPRINGS, FL・19 HOURS AGO
WOKV

Two children that were missing from Missouri were located in High Springs, Florida, in a grocery store Wednesday, a year after they first disappeared.
HIGH SPRINGS, FL・1 DAY AGO
WOKV

It may feel like spring in Texas, but some of the state's most populated regions are still reeling from last week's freezing temperatures. Some of the most populated regions of Texas could be in the dark for several more days as crews work to restore the power grids that failed as a result of freezing weather in the state that lasted for several days last week. More than 350,000 customers were without power in Texas on Friday due to the massive ice storm that brought freezing rain and sleet to much of the South, which weighed down power lines and trees. The destruction caused by the inclement weather prompted Texas. Gov. Greg Abbott to issue a disaster declaration in seven counties on Saturday. By Monday, as temperatures soared back into the 60s in some of the hardest-hit regions, most of those outages had been restored. However, more than 34,000 customers remained without power, mostly in Travis County, which includes the City of Austin, according to Poweroutage.us.
TEXAS STATE・13 HOURS AGO
WOKV

One of the beagles rescued from an alleged puppy mill will get her time to shine on the K-9 gridiron.
VIRGINIA STATE・5 HOURS AGO
WOKV

A Jacksonville married couple who authorities said trafficked drugs out of “trap” houses over three years have been sentenced to federal prison.
JACKSONVILLE, FL・4 HOURS AGO
WOKV

Sandwiches, wraps and other products are being recalled over Listeria concerns.
CONNECTICUT STATE・12 HOURS AGO
WOKV

Chinese balloon: Eyewitnesses react to takedown; ‘It looked like a shriveled Kleenex’

A woman was found breathing at a New York funeral home hours after she was reportedly declared dead at a nursing home.
IOWA STATE・3 HOURS AGO
WOKV

As a suspected spy balloon continues to float over the U.S., one police department in North Carolina is urging residents to use restraint -- and not try to shoot it down.
GASTONIA, NC・2 DAYS AGO
WOKV

The Democratic Party on Saturday gave its approval to change the order of its 2024 presidential primary, moving South Carolina into the leadoff spot ahead of the Iowa caucus.
SOUTH CAROLINA STATE・2 DAYS AGO
WOKV

An animal rescue in Ohio will write your ex’s name in a litter box to give to the cats and kittens for a $5 donation.
OHIO STATE・2 DAYS AGO
WOKV

Reports from the Jacksonville Sheriff’s Office state that an arrest has been made for a murder that took place in 2022.
JACKSONVILLE, FL・1 DAY AGO
WOKV

Chinese balloon: China threatens repercussions after US shoots down balloon

The U.S. military on Saturday shot down a suspected Chinese spy balloon near the South Carolina coast. The action came hours after the balloon, which Pentagon officials called a “surveillance balloon” was spotted over Charlotte, North Carolina, WSOC-TV reported.
CHARLOTTE, NC・2 DAYS AGO
WOKV

Two Memphis Fire Department EMTs who were fired earlier in the week had their licenses suspended Friday by the state.
MEMPHIS, FL・3 DAYS AGO
WOKV

The man who police say confessed to strangling a 27-year-old woman in Jacksonville in 2021 pleaded guilty Monday in her murder.
JACKSONVILLE, FL・6 HOURS AGO
WOKV

A sixth Memphis police officer was fired Friday following an internal police investigation for his alleged role in Tyre Nichols’ arrest, according to police.
MEMPHIS, FL・3 DAYS AGO