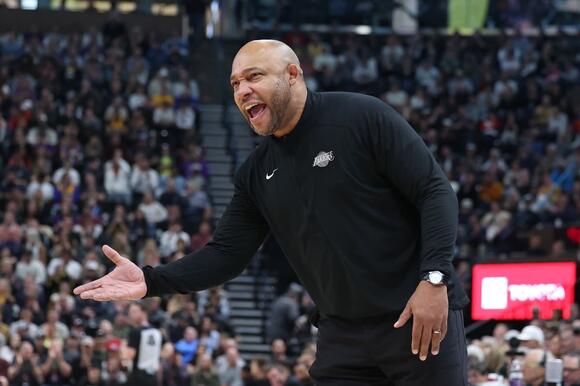 Do you see what we did there?

When your Los Angeles Lakers uncovered a stunning path towards snatching up a defeat from the jaws of victory last night in a 116-115 loss to the Indiana Pacers, NBA Twitter threw a variety of Lakers parties under the bus (or should we say Buss?).

One of the key Lakers to be singled out for criticism was first-year head coach Darvin Ham, whose head-scratching choices as the game got out of hand in the fourth quarter came under scrutiny.

With 9:59 left in the frame, the Lakers led the Pacers by 17 points. So naturally Ham made a change at point guard, and Indiana went on an instant 7-0 run.

This feels like mild Frank Vogel slander. He did win a title in his first year for L.A., and helped the team finish an injury-riddled follow-up season as one the league's strongest defenses. It's pretty clear now that what happened last year (when Los Angeles, fielding a bunch of washed-up role players, fell out of the playoff hunt and finished with a dismal 33-49 record) was clearly not Vogel's fault.

So why the hate? Phil Jackson is one of the all-time head coaching immortals, along with Red Auerbach, Gregg Popovich and Pat Riley. Vogel did a great job with a solid Lakers team, and was essentially scapegoated for the 2021-22 season. Vogel also coached several Pacers teams (led by Paul George, David West, Roy Hibbert and George Hill) deep into the postseason, including two Eastern Finals appearances in 2013 and 2014. He's pretty darn good!

Is Darvin Ham any better or worse than Vogel, who again is a good coach? This was a pretty bad game from an ATO perspective, but let's see how the season ends before jumping to conclusions.

Another L.A. fan noted that other critics (fans and reporters alike) have already blamed a variety of elements for the Lakers' bumpy 7-12 season start:

L.A. ownership came under fire a bit for its decision to hire Ham this summer.

Ham is not just the Lakers' first-year head coach. He is also a first-year NBA coach! Some fans were more forgiving of his gaffes than others:

Ham was also called out when one fan noticed that Lakers star center Anthony Davis, who looks like he's by far the team's best and most efficient player, got fewer shot attempts than playmakers Russell Westbrook and LeBron James.

Davis does need to get more touches than Russell Westbrook, especially since Davis played nine more minutes than the bench guard.

This writer submits that, this game aside, Ham seems like a solid coach, who has been tinkering with the Lakers' lineups all season while trying to figure out how he can best maximize the team's existing talent.

And that, at the end of the day, is the trouble: the existing talent, assembled by Rob Pelinka over the summer, has been somewhat underwhelming this year.

Could the Pat Bev Experience finally, mercifully be coming to a close?
LOS ANGELES, CA・1 DAY AGO
AllLakers

Why Wenyen Gabriel Has Been Out Of LA's Rotation Lately

The big has barely played on this current road trip.
LOS ANGELES, CA・1 DAY AGO
AllLakers

Is his NBA career over?
LOS ANGELES, CA・2 DAYS AGO
AllLakers

The NBA wants to make sure everyone is able to watch potential history.
LOS ANGELES, CA・2 DAYS AGO
AllLakers

Would the Nets be amenable to this return package?
LOS ANGELES, CA・1 HOUR AGO
AllLakers

A journeyman vet wants in on this hypothetical reunion.
LOS ANGELES, CA・20 HOURS AGO
AllLakers

A blockbuster and a more marginal deal.
LOS ANGELES, CA・54 MINUTES AGO
AllLakers

The Lakers would love to have him in the lineup.
LOS ANGELES, CA・1 DAY AGO
AllLakers

What a day it's been.
LOS ANGELES, CA・23 HOURS AGO
AllLakers

Lakers News: Kyrie Irving Out Ahead Of Nets Game Tonight -- Is A Trade Imminent?

Lakers News: Oddsmakers Like LA To Win Against A Beatable Indiana Club Tonight

The shooting guard will be a restricted free agent in 2023.
LOS ANGELES, CA・2 DAYS AGO
AllLakers

Could the nine-time MVP be on the movie?
LOS ANGELES, CA・1 DAY AGO
AllLakers

LA could use a "gimme" game.
LOS ANGELES, CA・2 HOURS AGO
AllLakers

All Lakers Expert Predictions For LA's Battle With The Indiana Pacers

The Lakers would love to get back to a .500 road trip record.
LOS ANGELES, CA・2 DAYS AGO