Ohio and West Virginia state quarters could be worth $55 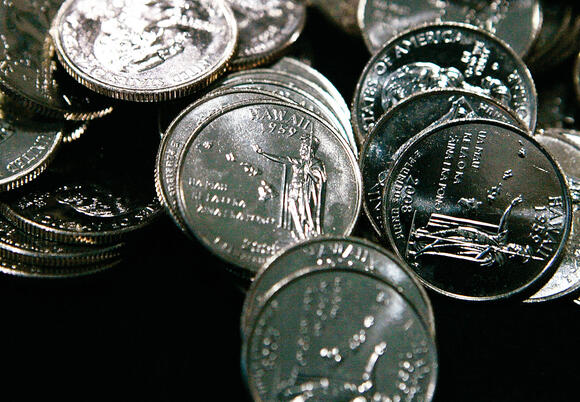 NEW HAVEN, Conn. ( WTNH ) — Your state quarter could be worth a pretty penny — or more than even 25 pretty pennies.

Odds are, however, that the quarter in your collection is only worth a quarter. But if it’s in mint condition, you’ll get at least $1 — or even up to $55 — for it.

The U.S. Mint State Quarters were created from 1999 to 2008, with coins for five states released each year. Those coins have one of three markings — “D,” “P” or “S” — which signifies where they were minted. D stands for Denver Mint, P stands for Philadelphia Mint and an S is for those created at the San Francisco Mint. Coins marked with an S, and coins marked with an S that are silver-proof, are more likely to fetch more than D or P coins.

Silver-proof coins, which are made of 90% silver, change in value depending on the current price of silver, according to Nationwide Coin & Bullion Reserve.

State quarters in mint condition marked with a D or a P are worth only $1 in 10 states, and are worth an average of $1.71 each, according to Coin Trackers. You’ll get the most, around $3.50, for Connecticut, Delaware, Georgia, New Jersey and Pennsylvania state quarters.

S coins that are silver proof are worth the most, at an average of $14.57 a quarter, according to data from Coin Trackers. But while you’ll only get $8.50 for a Delaware coin, your Pennsylvania quarter could fetch $55. You can get $50 for a Connecticut or New Jersey quarter. If you have a full set of silver-proof coins, the collection could be worth $1,500, according to Metro Metal Detectors.

But how can you tell if your state quarters are silver-proof? There are a few subtle factors that may give it away, according to coin-collecting experts.

“These coins can be differentiated by the silver edge of the coin, the slightly greater weight of 6.25 grams, or by the official US Mint packaging,” according to My Coins Guide, noting that the latter may have indicated the quarters’ makeup when shipped as part of a set.

There are multiple other factors that can increase a state quarter’s value, including for those that are in circulation.

For example, some 1999 Delaware state quarters have a defect from a die break. On those quarters, there is a line from the horse’s mouth to the left. While these used to be worth up to $500, the price has now dropped to about $10 to $20 a quarter after it was discovered how common the error was.

But no matter the current price, it’s wise to hold onto your coins. You never know what it might be worth one day.

Use the database below to check the worth of your state quarter. The listed amounts are for quarters in mint condition, according to Coin Trackers:

I recently found a 1964 silver Quarter while cashing in change. Very rare to find one still in circulation probably the first one I found in at least 10 years.

well i by chance you have one of these valuable coins where do you go to cash them in for this $55.00?

WOOD COUNTY, WV (WOWK) – The Parkersburg Police Department is putting together a volunteer search group to help locate a missing woman. The Parkersburg Police Department says a “large-scale search effort” to find Gretchen Fleming will take place Saturday, Feb. 4, and they are looking for volunteers who are capable of searching rugged, wooded terrain […]
PARKERSBURG, WV・5 DAYS AGO
WTRF- 7News

(WTRF) – The sport of wrestling involves intense one on one competition. To be successful takes an incredible amount of hard work, courage and dedication. One area wrestler is putting all of those things together and is finding success at the national level. And he’s doing it at the ripe old age of 9. Meet […]
WHEELING, WV・3 DAYS AGO
WTRF- 7News

West Virginia ranked the most loving state in America

West Virginia has been ranked the most loving state in America according to a new study. Crossword- Solver says they have analyzed 15 million tweets to find out which states have tweeted the most terms of endearment. The team discovered that West Virginia is the most loving U.S. state, counting 613 ‘love you’ tweets for every 100,000 tweets posted […]
VIRGINIA STATE・4 DAYS AGO
WTRF- 7News

WHEELING, W.Va. (WTRF) – We are a month into the new year and still the opioid crisis continues to rage on.  It has fallout far beyond the people who are addicted, meaning families can take on additional struggles where kids are involved. 7% may not seem like a large number, but that’s the percentage of […]
WHEELING, WV・5 DAYS AGO
WTRF- 7News

West Virginia and Ohio Powerball Friday jackpot reaches $700M – when is your next chance to win?

A Bridgeport native secured a makeup modeling gig with Maybelline after someone randomly noticed her eyelashes.
BRIDGEPORT, WV・4 DAYS AGO
WTRF- 7News

A bill would create a new crime in West Virginia if you would urinate or defecate in public. The bill, Senate Bill 540, was introduced on February 1. The bill says any person who willfully urinates or defecates in a public place, other than a public restroom, under circumstances where he or she knows or […]
WEST VIRGINIA STATE・4 DAYS AGO
WTRF- 7News

ST. ALBANS, WV (WOWK) – A warrant has been issued in connection to a fight that broke out at a high school boy’s basketball game on Tuesday, according to St. Albans Police Department Captain Philip Bass. Bass, who was at the matchup between St. Albans and Ripley High School, said it was like any other […]
SAINT ALBANS, WV・3 DAYS AGO
WTRF- 7News

Deputies in Ohio were presented with a life saving award after a farm accident. Monroe County Sheriff, Charles Black presented Lt Norman, Deputy Boucher, and Deputy Schwendeman a Life Saving award for an incident that they responded to on August 8, 2022. All three deputies responded to a property on Flauhaus Road. According to deputies, […]
MONROE COUNTY, OH・3 DAYS AGO
WTRF- 7News

(WTRF) Today FBI Pittsburgh, the Pennsylvania State Police and West Virginia State Police announced a new initiative in the search for Maria Miller. The FBI also announced it’s offering a $5,000 reward for information that leads us to a resolution in this case. Miller was last seen at her place of employment, the Dandy Mini […]
SUMMERSVILLE, WV・20 HOURS AGO
WTRF- 7News

The team announced Wednesday that he had died. He was 68-years-old.
PITTSBURGH, PA・5 DAYS AGO
WTRF- 7News

Man wearing underwear on his head during robbery arrested in Ohio

STOUT, Ohio (WCMH) — A Kentucky man who police said robbed a grocery store while wearing underwear on his head in an attempt to hide his identity has been arrested, the Scioto County Sheriff’s Office said Sunday. Davonta Edward Mitchell, 30, of Paducah, Kentucky, has been charged with aggravated robbery, kidnapping, grand theft of a […]
ROME, OH・1 DAY AGO
WTRF- 7News

CHARLESTON, WV (WOWK) – A wanted fugitive from West Virginia is now in custody and a second fugitive is still at large, according to U.S. Marshals. The U.S. Marshals for the Southern District of West Virginia says Elijah Tariq Figg, 23, of Huntington, West Virginia was arrested in Los Angeles, California, by US Marshals on […]
HUNTINGTON, WV・4 DAYS AGO
WTRF- 7News

One man has been cited in a crash that killed “Tennis Shoe Ernie.” Officers said they responded to a crash with injury on Sunset Blvd and Negley Ave in Steubenville. Steubenville police say they found that Ernie Hollinger was traveling in his Yamaha scooter eastbound on Sunset Blvd in the right lane. Meanwhile, police say, […]
STEUBENVILLE, OH・18 HOURS AGO
WTRF- 7News

HARRISON COUNTY, OH (WTRF)– Over at Harrison Central High School, the girls of the Ohio Valley battled for the OVAC conference championship.   The River Pilots took on the Wheeling Central Maroon Knights for the 2A title. The Pilots won 57-46. Wheeling Park facing Morgantown for the 5A title.  Earlier this season Park swept Morgantown […]
2 DAYS AGO